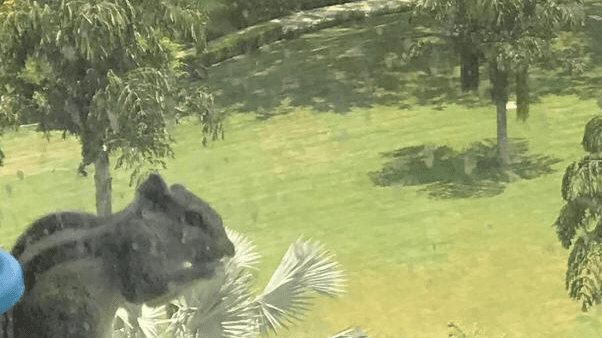 Feeding an animal is like feeding my own soul.

While cooking, a morsel fell on the floor; I picked that up, opened the window and put it on the windowsill thinking that some bird would take it away. I turned back and started cleaning cooking range and slab. I went to the sink to clean the scrubber. The sink was located close to window. I looked out. I found a baby squirrel relishing that morsel. I was happy to see it. The tiny hands were holding the foodstuff very delicately and were chewing it extremely slowly as if it did not know how to feed itself. Maybe it was its first meal, outside the nest and out of the mother’s custody!

Two days went by, watching two of them growing up. In the evening, I cut the fresh watermelon for myself. I took out the seeds and put them on the windowsill for the babies. When I returned to the kitchen after feasting on melon, to my utmost surprise there were three babies on the sill. One was searching with its nose, which seeds to be picked up, the other one was holding the seed in its tiny hands, removing the outer cover with its recently grown sharp teeth to enjoy the soft nut inside and the third one was bewildering what to do. It could not decide, as it was the newcomer, smallest, and fragile.

The most active baby came near, put its mouth close to the weakest sibling as if teaching how to hold, bite, chew, and swallow food. And the next moment, the little one was copying its healthy siblings. Suddenly, mother squirrel came jumping on each one of them, quickly filled her mouth with seeds, and hopped back. After all, she was a mother, she had to stock for the rainy days!

The three hungry babies loved to eat peanuts, pomegranate seeds, watermelon seeds, and muskmelon seeds. But most of the time, they were so hungry that they could just eat anything and everything!

The day before yesterday, I put some water in the bowl for them, as it was too hot outside.

Pic: Although it was very difficult to click them but somehow, I managed to click one of the three babies. 🙂

Be As You Are
You Walk Like The Wind