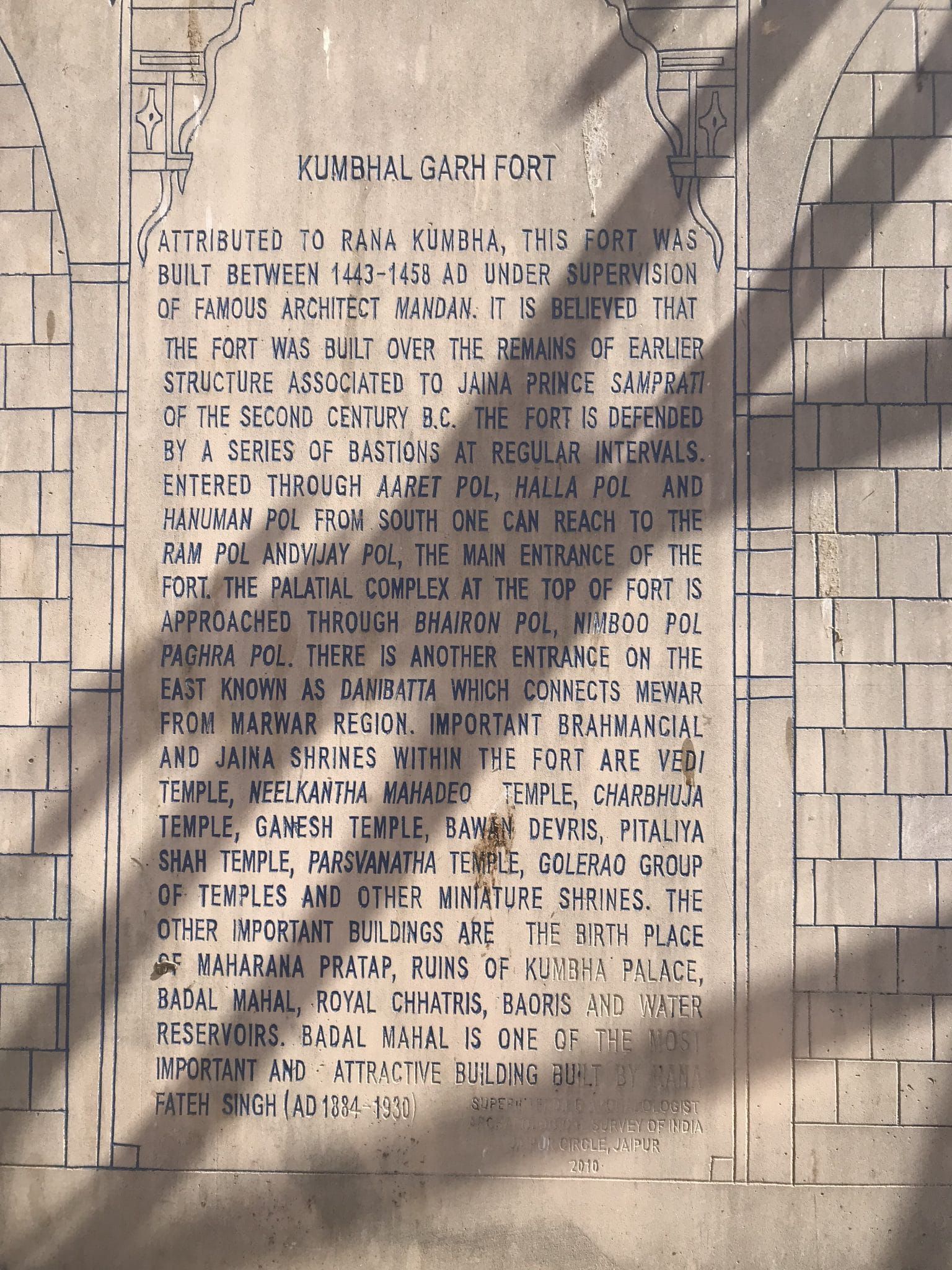 The Impregnable Fort of Kumbhalgarh

From the lens of a Vastu consultant

The Jewel of Rajasthan.

Kumbhalgarh fort is situated amidst the beautiful hills of the Aravalli range in the state of Rajasthan.

Built between 1443-1458 CE, this fortress was used as a backup residence by the royal family of Mewar, in the event of seizing or capture of nearby Chittor fort. We attribute the construction of the fortress to King Kumbha, so the name Kumbhalgarh.
However, there existed many structures before the 14th century as well. We can find many Jain temples built by Ashoka’s grandson, Samprati, hailing from the Maurya dynasty. In the year 2013, this fort, along with the other five forts, was declared a UNESCO World Heritage Site. The boundary wall of this fort is the second highest in the world, which runs 37 kms across the Aravalli range.

This fort was built under the supervision of Architect Mandan who also wrote many books like Raj Vallabh, etc. He worked very hard to preserve the ancient scriptures which were dying down due to the Mughal invasion. He is known to have applied ancient principles to the structures which were constructed under his supervision. He was the favorite architect of the Mewar region belonging to the Sompura Architect community known to have built the famous Somnath temple.

Perhaps even more astonishing than the fort is the surrounding wall and parapets. At almost 23 miles long, it’s the second-longest wall in the world, second only to China’s Great Wall. At most sections, it is 15 feet wide, but broader stretches reach 49 feet. Legend claims eight horsemen could ride side by side at the top. At each of its seven gates is a formidable rampart with circular bastions for archers and other fighters. The ramparts were often folded within each other in places where the wall was crenelated. But unlike the Great Wall, Kumbhalgarh Fort contains a powerful religious influence, with large and ornate temples.

The drive from Udaipur to the Fort is spectacular. It is through the Aravallis that we drive-through and the view is breathtaking…

From the prism of Vedic Vastu :

1)DESIGN:
The fortress is designed by architect Mandan, a staunch follower of ancient Vastu texts like Maymat, Viswakarma Prakash, Mansaar, etc,. Some scholars claim his real name might have been derived from Scripture Mansaar (epic text). It’s the most impregnable fort known to mankind.

The design is such that it cannot be seen from any height, that’s why it’s called impregnable. That is the specialty of this fort. It is surrounded by the hills in such a way that this fort is almost invisible. It is also called a mirage fort. That’s the beauty of ancient wisdom and it’s sad that it got lost due to invasions… And Indians themselves say all ancient studies are superstitious.. it’s beyond a normal mind’s comprehension is what I would say.

2)ENTRANCE GATES:
Like many fortresses, there are multiple entry gates, totaling 9 in nos, this is keeping the vastu tradition of odd-numbered gates or entrances, furthermore, the entrances are in descending order in terms of size, [the first gate being the biggest and last (9th) called the Paghara pol(gate) the smallest, the gates have detailed column design, the description of these designs can be found in ancient vastu texts.

3)HORSE STABLES:
The stable for horses is on the west side of the fortress, as suggested in ancient vastu scripture. Again there are odd-numbered slots in the stable (nine, 9).

4)ARMORY:
The armory and cannons are in the south direction. There are 5 (odd number) slots for cannons, again keeping the usage of odd numbers in usage.

5) TEMPLES:
All the temples (almost all ) are on the east side of the fortress, this is well-defined in Vedic texts that place of worship should be in east direction as the number 1 option, the surprise is that temples are exactly aligned at 90 degrees east, in 14th and 15th century, getting such precise alignment and placement is a miracle, it can be safely assumed they followed a system called “Shanku Sthapna”, a complex process for direction alignment explained in detail in ancient vastu texts.

The Shiva linga faces the north and you can find a peaceful NANDI in front of the lingam. They designed the temples following all the principles of ancient architecture. This is a west-facing temple overlooking the fort. I managed to take a pic of the fort from the temple. Since the road is on the west, it had to be a west-facing temple. Such entry is called as “Utsang” entrance. For details on dvar please refer our scriptures, available on Amazon. Link below.

6) KITCHEN :
The kitchens are in the north direction, the veg and non-veg kitchens are separated, for brahmins and for warriors or Kshatriya. this is again as prescribed by Vastu. There was also a chimney above for proper ventilation.

7) QUEEN’s RESIDENCE :
The Queen’s residence is in the north direction, further up from the kitchen, the palace has a big open area in the middle, known as brahmasthan , the temple is in southeast direction; the interiors are painted in green color representing the Kuber energy( deity of wealth), the open courtyard and temple location follow Vastu rules.

8) WATER BODY :
The water tank or storage is in the northeast direction of the campus. We find mention of this in all the books of Vastu (scriptures). The reason is that the Sun is in the North direction during the night. As we know, Sun travels from north to east from night to dawn. The energy or the fire element is minimal. So the water stays cool. If the water stays cool and we drink this water, we stay cool..as we are 70% water. So water bodies are best placed on north or east, west avoiding the south. In my practice, I have seen many vastu consultants placing overhead water tanks on the southwest which is dangerous and none of the scriptures mention this. As per Brihadvastumala Granth, if the owner places a waterbody on the southwest, it may lead to his sudden death. As per Samrangan Sutradhar granth, if a Vastu consultant without reading scriptures practices vastu, he should be punished by the king (government in present scenario) as he may lead to someone’s early death or may push the owner to some misery.

9) MISCELLANEOUS Observations :
a) the walls and terrace have mandala paintings or patterns considered auspicious.
b) the knobs and hooks are in the shape of peacocks, lions etc.
c) many depictions of cow and calf, to create positivity.
d) temples are elevated with a base platform.
e) toilets and washrooms are separated from the living area.

CONCLUSION :
We can safely deduce that architects and designers of this fortress were well aware of Vastu and ancient architecture science, the alignment and precise position of all elements suggests that they followed Vedic texts. The design pattern allows the free flow of light and air.

The Architect of this fort was the author of many books. One such book is Sri Raj Vallabh. We, as authors, have tried translating it. Do read it to know the details of the ancient science of vastu.

Here is the link:

The Ancient Science of Vastu-III, The Raj Vallabh Retold

Other scriptures translated by us: Available on Amazon, flipkart, bluerose, ingram

The Ancient Science of Vastu-I, The Vishwakarma Prakash Retold.

You can follow me on insta for great vastu tips:insta/drjayshreeom

Author of the bestseller, The Ancient Science of Vastu- I & II. A Ph.D. in Vedic Vastu and Geopathology. Follow me on insta@ drjayshreeom for genuine vastutips facebook:-https://www.facebook.com/jayshreeborad