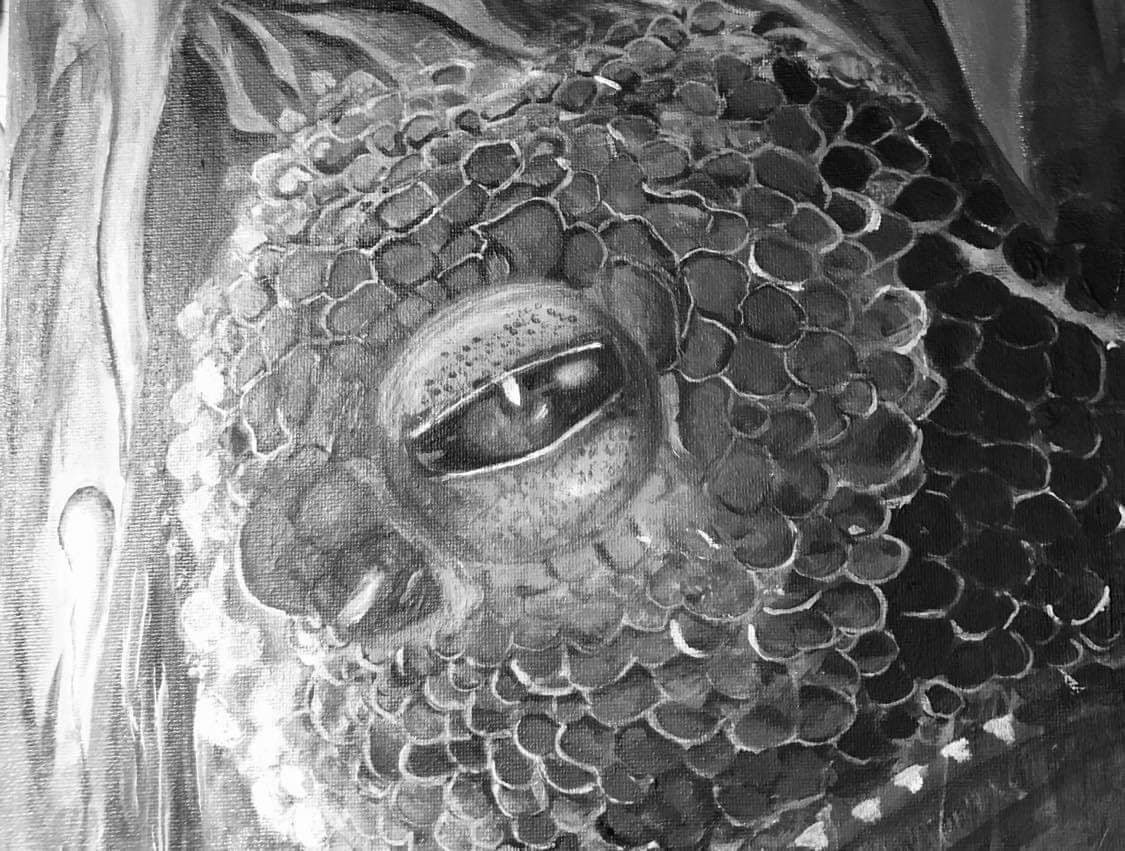 The deep oceanic expanse breathes Divine warmth and love . How big is His Ocean?

I offer my humble Pranaams to you Rev. Sri. Sri. Om Swamiji🙏 Wishing you love, good health and peace 🙏🕉

Humans have always experienced an intense relationship with the oceans. Pouring feelings into the seas is an ancient practice.“Limitless and immortal, the waters are the beginning and end of all things on earth.” – Heinrich Zimmer

Balance and self connection has unique ways to show up , and I  found myself waking up with a soft touch to a bright  and amazing world dripped in waves of Grace. The heart of this tiny speck ( me) kept offering flowers of gratitude  to the Universe as I witnessed The BIG day watching this ecstatic documentary  “ My Octopus Teacher”.

The Ocean Superstars undoubtedly proved to be far more remarkable  and advanced in making humans their big fans.  The movie cast a magical spell to the extent that I ended up striking an immense liking for molluscs .

Strangely,  as a kid I really found molluscs a bit creepy, maybe because of their bobble like structure and sticky appearance but after watching the documentary  I could not but help worshipping the Octopus.

It opened a whole new world of exploration within me. The ripple effect was profound.

Without any schooling how do these oceanic species function? What is it that guides them to be who they truly are, and still have this uncanny ability to teach the world !

I so wanted to hug the Octopus . The overwhelming feeling of warmth towards it lasted for days. There were moments  when tears would roll down my eyes with the thought of this gifted creation’s abilities.

There was a mystic fluidity in this “Cephalopod” that left me spellbound . It reflected tremendous amount of sensitiveness and heightened awareness,  be it’s touch, it’s sophistication and above all a unique  keenness of sensing its world around. It was just reveting!

Its eyes had a solitary ability to overwhelm not just the heart of the ocean where it dwelled but even the human heart .  It was contagious. No wonder the Divine himself has Blessed it with three hearts!

Three hearts!!!?? What sort of species is this , so spectacularly made? What is its world all about?

I could not but help explore more about the Octopus  and came up with amazing facts that are simply out of the world.

Sharing some strange but true facts of these amazing little monk creatures:

Research by the World Animal Foundation and  National Geographic.

Octopuses have 3 hearts, because two pump blood to the gills and a larger heart circulates blood to the rest of the body.

Octopuses have 9 brains because, in addition to the central brain, each of 8 arms has a mini-brain that allows it to act independently.

That means that an octopus can focus on exploring a cave for food with one arm while another arm tries to crack open a shellfish.

**Speaks volumes of, their ability to problem solve.

Octopus blood is blue because it has a copper-based protein called hemocyanin that carries oxygen in its system.

When scared, octopuses will shoot a dark liquid, sometimes called ink, at the thing that scared them

This will temporarily blind and confuse a potential attacker. The ink can also dull the attacker’s smelling and tasting abilities.

***Speaks of their intelligence

In case if they loose any of their arm during an encounter, they can regrow them again.

The mimic carnivorous Octopus can easily  change color to hide and match their surroundings like blue, gray, pink, brown or green and also  able to flex its body to resemble more dangerous animals, such as eels and lion fish. ‘

They have suction cups on the bottom of each arm. Their suckers have receptors that enable an octopus to taste what it is touching. . In fact, two-thirds of an octopus’ neurons are in its arms rather than its head.

The only hard part of their bodies is a sharp, parrot-like beak that is on the underside, where the arms converge. Octopuses have powerful jaws and venomous saliva and excellent sight.

They are the most quick witted and behaviourally diverse of all invertebrates.

Last but not the least they have their own unique individuality…

Octopuses tend to be solitary….

It is a lunar creature affected by the tides and the waxing and waning of the moon.

Since most of its neurons are in its arms, which raises the possibility of diffuse consciousness or even multiple selves.

One could still  dig deeper and deeper into exploring the  history and functionalities of these amazing  Cephalopods .

Speaking about the movie, it has touched millions of hearts and truly deserves much credit .

A little brief of “My Octopus Teacher”…

Craig foster a South African documentary film maker has managed to touch and develop a deep connection with nature and it’s species through his movie to many hearts all over the world.

The story that begins from the ethereal looking shores is deep and so visually engaging. It had so many magical and captivating moments of emotions where Foster goes with the flow  of time, racks forward through an aquamarine dreamland of  deep swaying kelp forests, to patiently each day building a rapport with an  Octopus. It takes days for her to trust Foster but once she does a whole new beautiful and healing world  opens up esp for Foster. .

. “Her entire being,” rhapsodizes Foster, “is thinking, feeling, exploring.” For her part, the octopus is busy studying Foster, but eventually he realizes how much he gets to learn from the Octopus as a Teacher, that  lead to reawakening  his dormant passions for photography and the ocean and  made him feel emotionally sentimental and deeply connected towards species and animals for the first time.

Amazing, isn’t it! How an Octopus/ Species/ Animal can ably bring forth a big transformation.

Roger Horrocks’ the cinematographer who  has captured the diverse metamorphosis of the Octopus is bewildering.

Can’t but help thank this wonderful team for giving us such a Masterpiece of Awakening.

My journey into the movie that took my breath away….

It felt that this marvellous , cogitative, curious Octopus had immense depth of understanding, love and heightened awareness  to offer …..

One is transported to a different world altogether with it. The movie projects  the glorious world of the ocean and deep interactions of its beings.

There is  this one moment that swept me completely, a scene where in the deep oceanic water of swaying kelp, Foster is in eye-level with the octopus. The Octopus  remains half-tucked in her rocky den with just the reflection of her curious eye popping out sensing to trust him. That moment spoke of two unknown worlds looking straight into the eyes of each other. A bond that eventually was created in days.

I could not but help pick up my canvas to paint that “Expressive eye”…reflecting deep inner persona , of this ambidextrous, sophisticated ,multi hearted , oceanic being.

The intensity also carried an immense softer side that oozed of selfless love, especially the female octopuses ( they have a short life and leave their body soon after the reproduction process of which they are completely aware ).It was the most heart breaking scene to witness the process, of it fading.

What better way than to recreate my emotions having an eye to eye contact with the Star Octopus equally good as getting  autographed by it.  As strange as it may sound I just did not know how to begin it for it was the first time I  was attempting to paint such a unique oceanic species.

It’s been almost over 3 months , bit by bit I painted, immersing myself in communication with the graceful Octopus.

The Painting… “Eye to Eye” 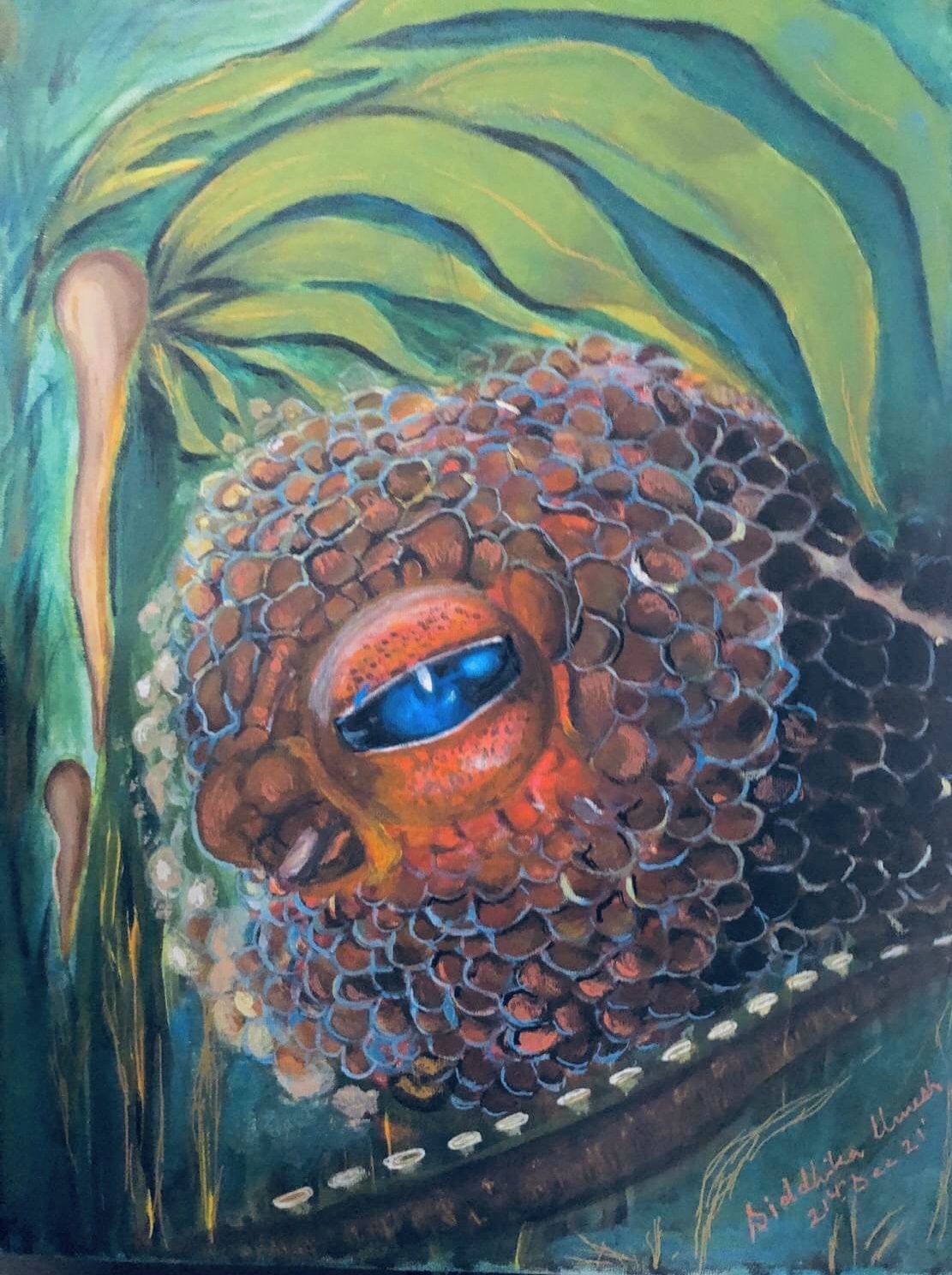 So Blessed is our Planet and so are we…

An invisible yet invincible spine ( as the Octopus has no bones in it) is an awakened one  and carries immense charm and beauty of Soul consciousness .

It leads us to a higher learning to simply  tap the self to living  a life of awareness, facing waves and tides, breathing stillness of  Trust and faith in this deep oceanic creation, so that when the final curtains are drawn it delights one to see “ eye to eye” with its own Universe. A  legacy that would echo impactful frequencies to a better world for generations .

Nature has its own beautiful way of healing and impacting our lives. It teaches us about being more caring and sharing.

Let’s in all kindness keep honouring  and connecting to nature like never before and keep  respecting every Species, animals, creatures, on this planet,  allowing them their space.

In the bigger scheme of things we are here because of the Grace of Mother Nature. Our very kindness manifolds and leads into  our own deeper realization and  grace our lives beautifully too.

“Advice from the Ocean: Be shore of yourself. Come out of your shell. Take time to coast. Avoid pier pressure. Sea life’s beauty. Don’t get so tide down on work that you miss out on life’s beautiful waves.”~Unknown

In all please do watch  this documentary,  in quietude, “ the me time”  through the lens of the Octopus that leads us to explore the ocean of our very own heart. Even if you are not an animal lover it would make you fall in love with them😊

Thank you immensely for your precious time my OS family and dear readers. With Christmas and New Year round the corner , I extend my good wishes to all. Divine Bless you with good health, cheer and peace abundant. 🙏🕉

Pic above: Painting done by me.

The Message
My Rendezvous with an Aghori Sadhu