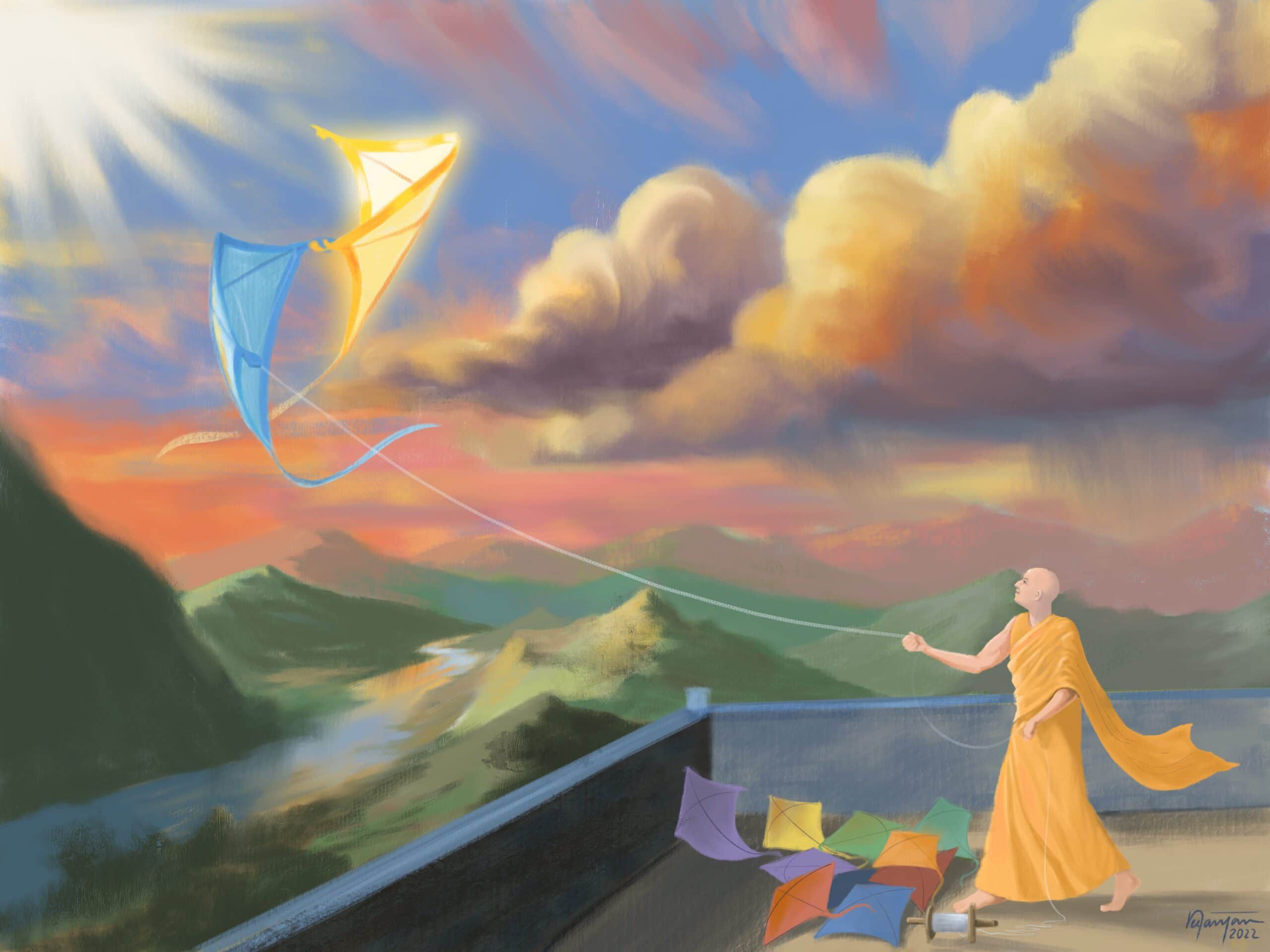 The Liberation of Kites

A Tale of the Master, Shveta, Blue, and hundreds more 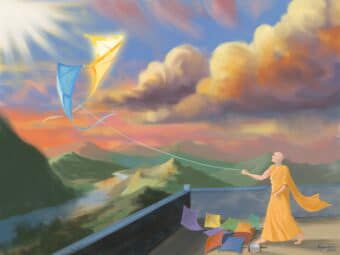 On a stormy evening, a man stood on his terrace. The sun was about to set, and the orange light bounced off his robes enveloping him in a divine halo. The clouds whispered as they floated around aimlessly.

“He shines like another sun,” said one cloud.
“Look at his nimble fingers as he threads the kite,” said another.
“You guys love his eccentricity, don’t you?” chuckled the darker storm cloud drifting into the horizon.

Eccentric was the most polite way of describing him. He walked around the town and sometimes broke into a mad song and dance as he sang the glories of his lord. Somedays he played the flute that mesmerized onlookers and at other times wore a colored dupatta on his head and swayed like a gopi in the middle of an invisible Raas Leela. At times, he sat outside the temple and expounded on the principles of oneness and just kept shouting Tat Tvam Asi.

He never took on any human disciples. His parents had died early and left him a house and some money. The only affinity he had was towards his kites. He had hundreds of kites at home. He sat on the terrace with bamboo paper, twine, and thin bamboo strips. People heard him whispering to kites, advising them, caressing them, and telling them stories as he shaped them.

Over time people concluded he was someone who danced on the thin passage that separated the sane and the insane. He was not rational enough to be civilized or insane enough to be institutionalized. So, they just left him alone.

Every evening, you could find him on his terrace as he flew different kites. It was an intimate experience to watch him. His kites seemed to be wilful as though they had lives of their own. He seemed to teach the kites to befriend the winds, dance in the sky, and find their rhythm. He flew them in calm weather and stormy evenings as thunder and lightning split the clouds.

Under his tutelage, the kites learned how to dive sharply, rise swiftly, float serenely, and compete fiercely if any other kites came looking for a fight. No one had ever seen his kite lose a skirmish, and hence they all left him alone.

A new rumor had recently been doing the rounds. Onlookers reported these days, he was launching his kites into the clouds and releasing them. Children ran for miles trying to capture them, but they seemed to disappear behind clouds and never drop back onto the earth. Some just called it one more yarn that can be added to the tapestry of oddities of this man. Others found a dozen mystical meanings and whispered them to anyone willing to lend an ear.

Today evening, he was knotting Blue to the string. He gently made a special knot to fasten her to the twine and whispered how he had taught her everything she needed to know, and now it was time to let go. He launched her into the sky, and she hummed as she rode the winds. She went higher than ever before, eagerly tugging at the twine as she went beyond the white clouds that marked the boundaries of this earth.

Today was her liberation day. Her master had trained her for today. The wind, the paper, the twine, the bamboo, everything that used to bind her would dissolve, and she would be free. All she needed to do was willingly dissolve the secret knot that the master used to bind her to the twine. She flew higher than ever before till the mountains appeared like tiny pebbles dotting the earth.

It was now time. She steadied her mind, ready to tell him she was ready to detach, and he could undo the knot. A few more seconds and she would be free. Suddenly she shuddered and trembled. Instead of feeling the joy and freedom her master promised, she felt panic flooding into her. The twine that had been her lifeline for all her flights would soon disappear.

How will she swoop and swerve without support? What if the master was playing a cruel joke? What if he was simply tired of her and wanted a new companion? She had never seen any kite be liberated. They merely went beyond the clouds and never returned. These thoughts flooded her mind like an army of locusts invading a field.

Suddenly, the freedom she longed for seemed impossible to achieve. It was foolish to abandon the safety of the string. She resolved to descend back to the terrace and beg her master to keep her with him forever when she heard a whisper.

“Don’t panic, little one. I am here for you. Open your eyes.” The voice was shy and sweet but carried a certain authority. It was phrased like a request but seemed to be a command from the master.

“Master,” shouted Blue and opened her eyes. Instead of the master, another kite glided alongside. She was a pure white kite with golden borders and a bright red tail that flapped as she rode the wind. “I am Shveta, little one,” the white kite whispered.

Blue trembled and tried to whisper the master’s name. “Don’t worry. I promise, he will not let go till you are ready,” said Shveta. “Now relax and move with the wind. Up you go to ride the wave and swoop down when it becomes too strong.”

They did this for a few minutes as the master watched them with a proud smile. Shveta was his first liberated disciple and the greatest one. The master’s eyes misted up as he helped Blue focus her thoughts by flowing with the wind.

The master felt the strings slacked as Blue drifted further away under that watchful gaze of their master, the White Lotus. Blue had climbed her second mountain.

The master heard her words in his mind when Blue whispered, “I am ready, master.” He gave a special tug, and the knot that held her gently loosened before coming undone.

Blue felt light and suddenly felt her papery existence dissolving into light. “It’s so beautiful, Shveta. Why don’t you join me? How can you be so solid and help me dissolve? Don’t you want this?” Blue screamed.

Shveta smiled shyly, and suddenly she dissolved into bright light before becoming a kite again. “I am already free. The master liberated me first, but I chose to come back. I knew he needed someone to help guide children like you.”

Blue felt a small tear descend before entirely dissolving into the light. The master looked on proudly as Shveta drifted off, waiting for the master to set the next kite free.

The master wound up the twine and smiled as the full moon peeked from behind the cloud. He had made and liberated so many kites. They were all his children. They all achieved it when they were ready, but Shveta was the only one who returned.

It’s almost impossible to resist the call of the beyond, and yet Shveta returned, waiting for the master because she knew that he had come back for her and hundreds more who still needed to drop their attachment.

Note: This story is a joint creation by Akshay Om and Neelanjan. It is dedicated to our revered guru Om Swami and our divine mother Sri Devi Om. Swami has written a post about attachments and my mother had also been coaching me about the same. This post started out as a protest to getting detached but very quickly turned into what you see today. We defeat the purpose of having a guru if we cling to their robes and refused to walk our own path. The more quickly we let go the easier it for them to work on us. They can show us the way and guide us but we need to have the courage to walk the path.