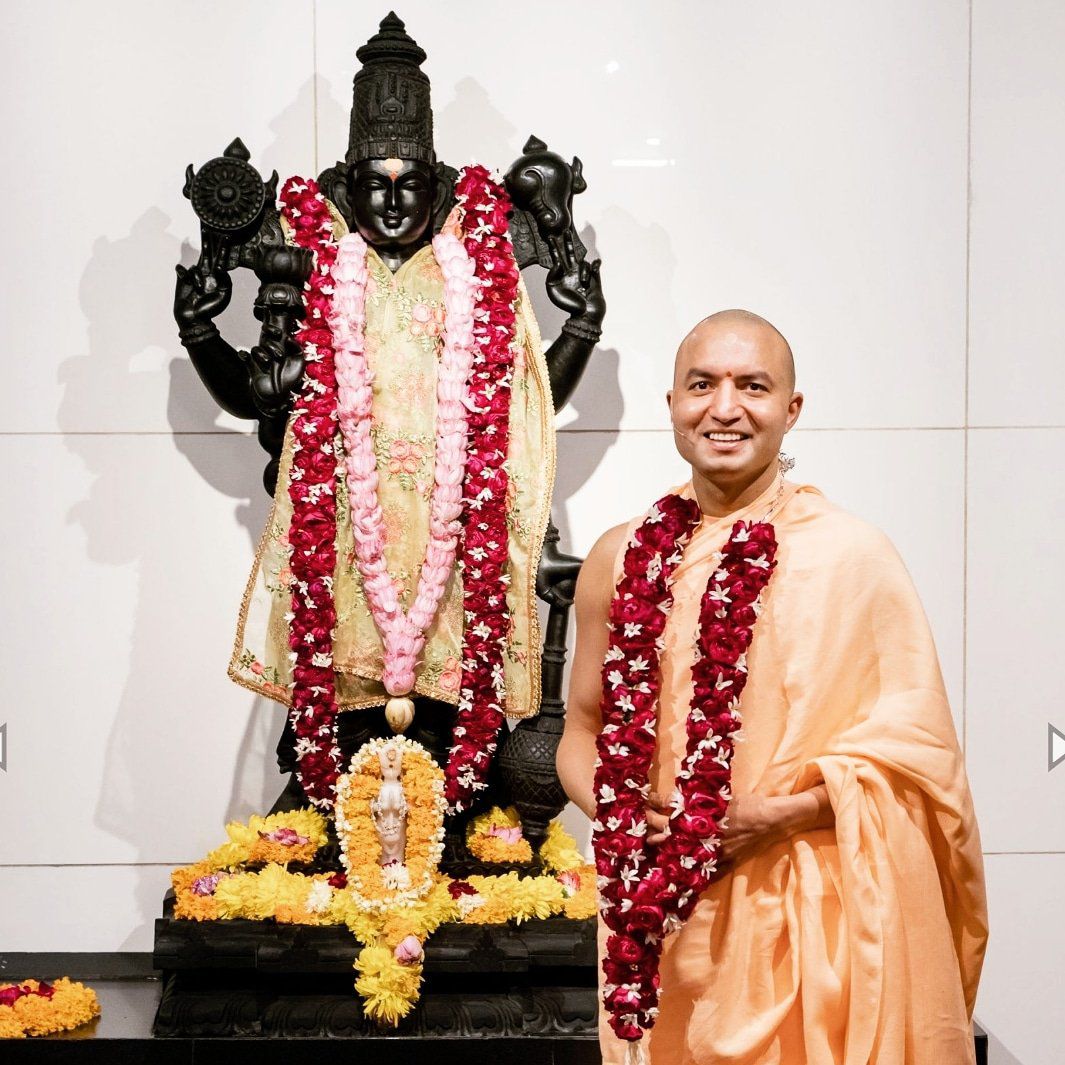 The Longing of Sant Namdev

An Amsa (part) of Lord Krishna.

Over the past couple of days, I have come to a conclusion about my beloved Guru Om Swami. He is a bhakti saint who is doing so much more in this avatar simply to fulfill the purpose assigned to him by the divine mother.

The seed for this was planted when I first heard him talk about legendary saint Namdev in his audible series. The level of intimacy and warmth in his voice as he described Sant Namdev’s bhakti pierced me. Namdev was not a servant of Lord Krishna but His companion. Namdev was an Amsa (part) of Lord Krishna.

That was my Swami at his core. A bhakta beyond comparison. A simple monk in a complex world. Let me tell you the story Swami narrated about Sant Namdev.

That was my Swami at his core. A bhakta beyond comparison. A simple monk in a complex world. Let me tell you the story Swami narrated about Sant Namdev.

Sant Namdev lived in Pandarpur, Maharashtra, and prayed to Pandurang Vitthala (Krishna). On one occasion, Namdev was dancing so enraptured in the glory of God that Vitthala himself wore a pitambar and came to dance with him and his band of kirtan wallahs. Krishna danced with such enthusiasm that his pitambar fell to the ground, and Namdev had to request him to slow down so that others could keep pace with him.

One day Namdev was lost contemplating on the divine when his wife got him some chappati, ghee, and gud for lunch. Namdev told her to keep the food aside since he did not wish to eat at that moment.

After a few moments, a dog saw the food. The dog also Namdev lost in his own world, chanting the name of Vitthala. Sensing an opportune moment, the dog grabbed a couple of chappatis and bolted off. Namdev grabs the ghee and gur and starts chasing the dog. Namdev was shouting Vitthala Vitthala and chasing the dog because he only saw Vitthala everywhere. The dog was running scared, and Namdev was running faster than him.

Swami says a true devotee runs faster than God when he sets his Mind to it.

Sant Namdev could see Vitthal in the dog and continued chasing him until he cornered him. Namdev walked up to the dog and said, “Vitthal, please don’t eat the dry chappati since it will get stuck in your throat. You are the gentlest and softest of beings. Don’t sit on the floor.”

Sant Namdev took the dog on his lap and started feeding him gently. People around him are amazed to see such a renowned saint feeding a dog so tenderly and gently.

Swami goes on to say that we have two choices:

He recommends that we definitely choose the second route because that’s the purpose of a spiritual journey.

A Second Story About Sant Namdev

This story has two versions. I will give you both versions, and you can select which one you like. Let’s start with the part that is common to both stories.

Namdev and his best friend, the legendary Jnanadev, were on a spiritual pilgrimage across India. They met other saints such as Narsi Mehta at Junagarh; Kabir, Kamal, and Mudgalacharya at Kashi; Tulsidas at Chitrakut; Pipaji at Ayodhya; Nanak at a place in the Deccan and Dadu, Gora and Matsyendranath in other places.

Namdev’s world began and ended with the deity ‘Vithoba’ of Pandharpur, and he would not recognize any other Deity as the symbol of God. The pilgrimage lasted about five years. During this period, Jnanadev advised Namdev to adopt a Guru so that he could realize the manifestation of the all-pervading God. Namdev hesitated because he thought such action might alienate his loyalty and devotion to Vithoba and stated Vithoba was his Guru.

However, Jnandev and other saints felt Namdev’s view was narrow. They asked Gora, another saint and a potter by trade, to ascertain which of them were half-baked, which means they have not realized the Brahman yet. Gora took a small, flat wooden board and began to pat everyone’s head. When it was Namdev’s chance, he cried aloud, thinking he was hurt. Immediately, Muktha Bai said Namdev was only half-baked and had not realized Brahman yet and all the company members laughed.

Namdev grew agitated and bitterly complained to Vitthal. He stated he did not need a guru since he had a relationship with Vitthal. Hearing this, Vitthala challenged him that Namdev could not recognize him if he appeared before him.

Here is where the story diverges a little.

Vitthala took the form of a Pathan horseman. He passed before Namdev, who could not recognize him. Namdev agreed to go to a Guru, and Vitthala advised Namdev to take Visoba Khechar as his Guru.

Namdev was resting in the evening when he saw a Chandala (scavenger) and his wife (Vitthala and Rukmini) cooking their evening meal. The Chandala told his wife that since the cooking pot was not full, they should add chickens to the pot. These represented the twenty-five tattvas. Namdev did not realize this and thought this was extremely violent, but this is also God’s will. Next, the Chandala asked his wife to cut four dogs and add them to the pot. Namdev watched, horrified, not realizing they were the four Vedas and thought these people were going to pay for their actions. Vitthala was teaching Namdev that when you butcher all Tattvas and Vedas, only the ultimate reality remains behind. This was the last lesson for Namdev because he was still caught in the duality of seeing Vitthala as different from the ultimate truth. Suddenly, the Chandala said, the pot is empty, so let’s cut up the man and add him to the pot. Namdev forgot all about Vitthala and took off at full speed.

After this, Vitthala directed Namdev to his Guru Visoba Khechar.

The Story Of Janabai

No account of the life of Namdev would be complete without mentioning Janabai. The only thing we know about her life is that she was Namdev’s maidservant. She forgot her individual existence and only thought of herself as the maidservant of Namdev. In several poems on devotion which she has left behind, she describes herself as ‘Nam’s maidservant’ or ‘Namdev’s Jani.’ She was one of the closest followers of Namdev and had no ambition other than to serve Namdev and sing the praises of Lord Vitthal.

This entire post was inspired by a bhajan I heard a few days ago. It’s been with me for a few days. I would highly recommend, you watch it before you read on.

Oh Mind, how will you swim across a world full of toxins

Seeing the false Maya, you have gone astray Oh, Mind

If you understand the Paarbramha

Desires will not trap you

You will keep your Mind worry-free

I was born in a calico printer’s house

Still, I was blessed with Guru’s wisdom

With the blessing of the saints

I was able to meet Hari

This may be just a song for some of you, but I am living this reality today. I was recently offered a good price for a house I invested in and was considering selling it. I could then buy a bigger house that would be more valuable in a few years. As I was speaking about the idea to a few people, something from deep within me spoke.

“You are already trapped in a body. Then you build this concrete trap on top of your head. Now you will buy another giant trap and spend time searching it, finalizing it, designing it, and finding a tenant for it. All this for what? More Maya?”

It really shook me. Then I heard this bhajan and researched about Namdev. The supreme bhava that came from Namdev reminded me so much of Swami. Our dear master burns himself up to fulfill his mission of reviving Sanatana Dharma, but those dearest to him know that at his core is the greatest bhakta born in modern times. When we were in the ashram, and he organized an impromptu kirtan on Ramnavami, he refused to participate. He said it would send him into a state of bhava that he would be unable to do the havan in the evening. Like Namdev, our master is an Amsa (part) of Lord Krishna.

Just look at the world around you. We live in a world obsessed with productivity and a win-at-any-cost attitude. If you take a step back or openly talk about your faith, people call you crazy and delusional. It’s OK to eat unhealthy food, recklessly buy and sell guns, pump toxins in your body to look younger, continuously desire more wealth, and deliberately design technologies that will incite humans, but it’s crazy to talk about liberation.

If you finally find your guru, the chances that your spiritual ego will flare up and say your truth is the only truth is so high. If Namdev could not escape it, imagine how hard it is for us. If we somehow cross that, there are just so many distractions waiting to pull you back. What hope do we have? The Guru is our only hope. So I bow down to my dearest Swami and my amazing divine mother and request them to hold on to all of us and help us cross this toxic ocean of samsara.