The Luthier of Calcutta

The magic of Violins

We are all surrounded by stories. Every person is carrying a load of stories, some their own, some they are living and some they have just heard. And sometimes  chance to witness these stories and sometimes just hear them. And then the story continues again, and the story becomes a part of us one way or another. This story I wanted to share with you today, I have partly been a witness to and partly heard about it.

In the old winding streets of Calcutta, in between the tram lines and roads filled with honking yellow taxis, every summer I would sling my violin case on my back and navigate my way to a luthier. This shop was an old ram shackled shop, it was quite run down and cluttered with things and tools needed to fix violins. There would be wooden bench in the workshop which was as rundown as the shop and I would plonk myself trying to catch my breath from the summer heat. If there was anything neat in that shop, there was a small un pretentious display of violins for sale. On the red floor of this very old shop in one corner over looking the busy street was a man called Biren da. He was not very ancient, but they way he sat almost motion less fixing things on a violin often made me wonder if he was even alive. 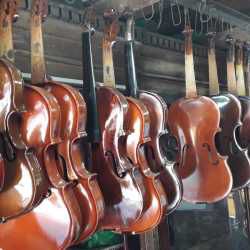 He would look up nod to acknowledge and then get back to work. If you were a violinist, he was the one you would want  your violin to be fixed by.  Never mind which city you stayed in. Violins are very sensitive instruments and the slightest  mis-handling could wreck it forever. So often times when I travelled from Delhi, many other violinists would thrust their violins asking me to carry it to get it repaired or maybe get a bow fixed. Till there was a time I never disclosed I was travelling to Calcutta, imagine one person running with 2 violins and a few bow cases across an airport.

Well, luthiers are a rare commodity especially someone who understands an instrument and then treats it. Biren da was thc kind of guy who would tell you, you are wasting money if I asked him to do anything extra for my violin.  This was obviously bad for his business. And he really could do with some extra money.

“It’s not needed now, I will fix it when you come next time”, he would gruffly say.

“But I can’t come before next year”

“Not needed “.  And then the conversation would end. And then there were times I also felt he was torn between trying to make a living from this profession that few understood or needed. And he wouldn’t hesitate to quote an high price for a set of strings. I never bargained with him. For me he was an artist, there was no price on his skill. If I could,I would pay. If I couldn’t, I would tell him, most often he always made a concession.

There was one time I told him he should market him self well, do up his shop, so people are attracted, his skills were rare but he had to market himself as well. I reminded him about the cheap Chinese violins making a killing while his handcrafted ones were not selling.

He turned around and said” We all live according to our destiny, it’s fine what I have”. And he bent back to a violin he was working on.

I don’t exaggerate when I say he was a craftsmen, quite extraordinary and perhaps if he was born in Europe he would have been known or been more well off. Luthiers learn skills from family. It’s handed down. In this run down shop, there was an entire wall which had old dusty pictures of rather famous violinists and other string players. They all sent their instruments to be repaired from this shop. One of the pictures in that shop was the following one. 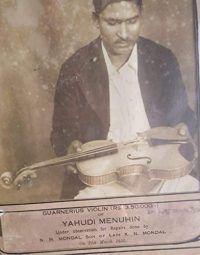 This gentleman was Biren da’s father (To my knowledge) and that violin he is holding belongs to Yehudi Menuhin, perhaps one of the most prolific violinists in the history of Western Classical music. There is story behind this. And I heard it not from Biren da, but someone else who knew him well. So when Yehudi Menuhin was in India, he felt there was something wrong with his violin. He was in a bit of fix he was in the middle of a concert tour and here his prized violin was not playing as it should. Some one suggested he should show it to this luthier who had a shop in Calcutta. Menuhin was very reluctant. You have to understand these artists play on instruments worth millions of dollars ,some of the violins are even 100 years old. And to be fair instruments are very personal to all musicians and so Menuhin wasn’t confident someone in India could even fix it. After all his violins went to the best luthiers in Europe.

Anyway an Indian gentleman accompanying told him he will not have to allow the luthier to touch it. How about he just invites him and while he plays maybe the luthier can hear what the problem was. Yehudi Menuhin agreed after all what was there to lose, besides no body could actually tell you what was wrong by just hearing it. Anyway to move to the end of the story, while Menhuhin played Mr. Mondol sitting in one part of the hall identified exactly what the problem was. So I don’t have to tell you what happened after, he fixed the violin. The violin he wasn’t supposed to even touch.

So you can imagine why pretty much anyone with a violin would prefer sending their violin to this shop. I had the pleasure of sitting around Biren da many times as I patiently waited for him to take my violin. His shop was not a busy one. Often some parents would come in with kids and ask for a violin. He would look the kid up and down and take a violin of a rack and say this will suit him.( Ideally violins are made for the handwidth of the person, however that luxury doesn’t exist anymore and most violin makers sell a general size).

Then one summer, I went with  my violin, the summer before that I had told Biren da I wanted my violin polished in a different colour. He had promised me he would do that the next time I came. I thought I had arrived early because his usual place was empty. A few minutes later his brother came out. When  I asked for Biren da, he told me, “He passed way  last year from a heart attack as he was coming to the shop, right in the street behind”.

The store is still there. That is the story of an unknown luthier tucked away in a small street, his expertise made many of our violins play. Like I said some stories we witness, some we live and some we hear. Whatever it is, those stories become a part of us. Now that you know this story of an unknown luthier, I hope his story to is something you can narrate to someone.