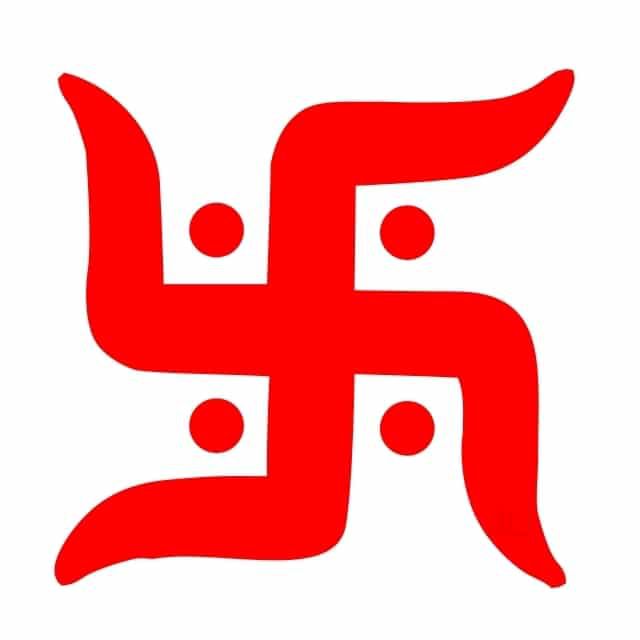 The word Swastik has a definite etymological origin in Sanskrit. It is derived from the roots su – meaning “well or auspicious” and as meaning “being”.

Swastik is that symbol through which everything auspicious occurs.

Scholars believe the word’s origin in the Vedas, known as the Swasti mantra;

O famed Indra, redeem us. O Pusha, the beholder of all knowledge, redeem us. Redeem us O Garudji, of limitless speed and O Bruhaspati, redeem us.

This can be represented as a figure in the manner discussed below.

The swastika represents the living creation in the whole cosmos. Hindu astronomers divide the ecliptic circle of the Cosmos in 27 divisions known as Nakshatras (asterisms). They are named after a prominent start or asterism in the respective parts of the Zodiac.

Opposite Chitra nakshatra lies Revati, the last and 27th asterism. Its presiding deity is Pusha.

Midway between Chitra and Revati, lies the 22nd, Shravan nakshatra. Its presiding deity is Vishnu, represented by his vehicle Garud (cited in the mantra above as arishtanemi)

Midway from Revati, towards Chitra lies Pushya, the 8th nakshatra, whose presiding deity is Bruhaspati.

In this manner, across forms in four directions in the celestial sky. At the center of this cross is Dhruva (Polestar).

In a line from Dhruva, the starts known as Saptarishi can be observed. Saptarishi means seven rishis (sapta – rishis). In the present yuga of Vaivasvat Manu, the seven rishis are

Gautam
Bhardhvaj
Vishvamitra
Kashyap
Jamadagni
Vasishtha
Atri
A smaller start lies next to Vasishtha, which is Arundhati, his wife.  These Saptarishis revolve (perform pradakshina) around Dhruva.

By drawing a line connecting the cross and the Saptarishis, the swastika is formed. In this way, the whole cosmos is incorporated in the swastika. When the swastika is imprinted during a puja ritual, the underlying sentiment is of veneration to all the living creation in the whole Cosmos, represented by the seven rishis.

Swastik in other cultures

Swastik was known and often commonly used as a symbol of fortune and prosperity in many other ancient cultures and lands as found on various artefacts discovered worldwide in different countries like Egypt, Greece, Italy, Japan, England, and the USA.

In 1889, Flinders Petrie discovered Greek pottery fragments with a Swastik in Naucratis, Egypt of the 12th dynasty, circa 3000 BCE. The oldest painted swastika appears in a Paleolithic case dating back 10.000 years. It was also found on early Christian tombs and on 2000 years-old Jewish temples in Palestine. Though the Swastik may have been used as a religious symbol in these religions, it did not have the same meaning of being redemptive (kalyankari), as it does in Hinduism. Neither did these religions have an exact etymological (relating to the origin and historical development of words and their meanings) origin for the word “Swastik”.

Such ubiquitous occurrence of only one symbol, the Swastika, throughout the ancient world from Europe, North, Central and South America to China and Japan, presents a compelling proposition; that of migration of people out of India. In his well-researched book, The Swastika, Thomas Wilson, in 1896 posited precisely this theory:

“If the Swastika was a symbol of religion in Indian and migrated as such in times of antiquity to America, it was necessarily by human aid…. Is it not equally strong evidence of contact to find the same sign used in both the counties as a charm, with the same significance in both counties?”

Furthermore, considering the probability of independent invention, Wilson opined, “….the chances of a duplicate invention by different persons in distant countries, without contact or communication between them, are almost as one to infinity”.

The Swastik then can well be presented as a tangible and contributory piece of evidence along with other findings which have recently emerged, for the case of people migrating out of Bharat and not invading it. In their recent book, Hidden Horizons – Uncovering 10,000 years of Indian Culture, (2006), N.S. Rajaram and David Frawley present irrefutable and impressive scientific evidence supporting this event, from diverse sources such as the human genome project, natural history, satellite images of the great Vedic Saraswati river’s paleo channels, flora, fauna, and climate in the Vedic literature and astronomical events in the Vedas.

The Swastik is one of the 16 sacred signs found on the lotus-feet of the Supreme Reality – Parabrahman Purushottam Narayan, the Supreme God, present in many different forms. In the Padma Purana, Brahma describes these to Naradji. Swastik is one of the eight signs on the right sole. In his Vaishnavatoshini commentary on the Shrimad Bhagvatam, Jiva Goswami cites that of these 16 signs, the more the number found on the soles of an avatar, whether two, four, five, the greater the avatar.