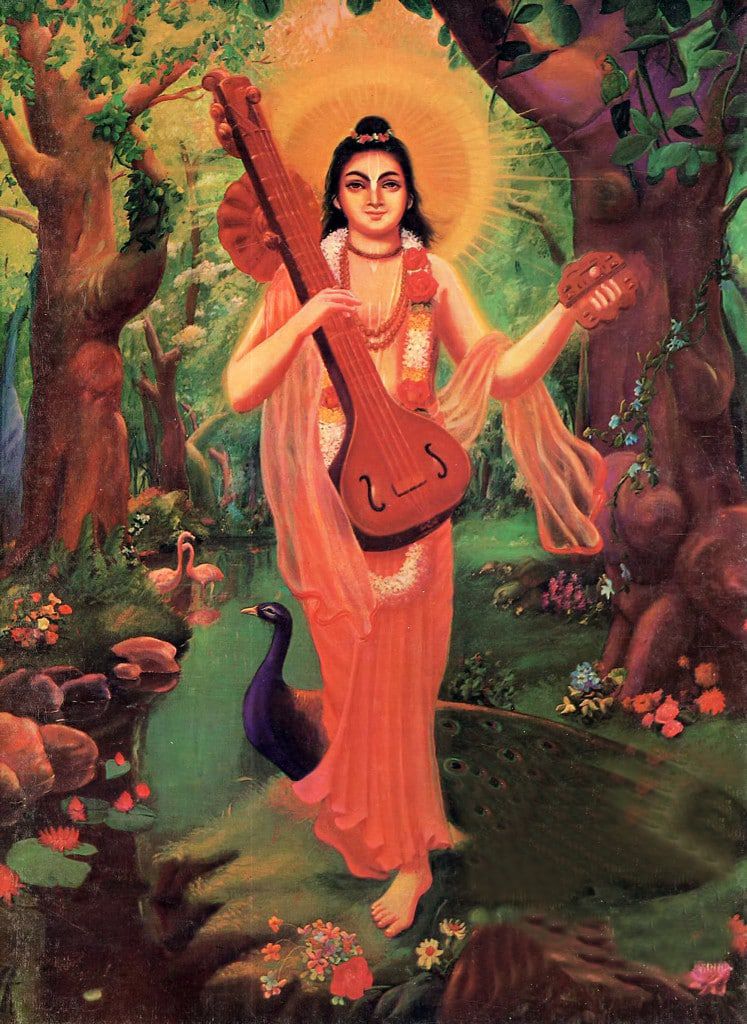 The Omnipresent Google of the Ancient World

I am sure the by line and the feature pic has taken away the mystery but do you know aside from being a Google of the ancient world , Narada muni was also the first journalist .Can you imagine Narada Muni — the perennial mystic presence across our scriptures is in fact the father of journalism and sting operations and he is is worshipped as such too . Narada Jayanti falling on May 27th this year is celebrated is “Patrakaar Diwas” or journalism day

One of the most famous sting operations of recent times was called the Narada Sting operation in which journalist Samuel Mathews caught on camera several politicians of the Trinamool Congress accepting cash in return for political favours . Its called Narada sting — because the journalist worked for the channel Narada news .

Narada Muni of the yore, however ,did not have a TV channel of his own like Arnab Goswami . He was roaming everywhere from Swargalok, the abode of the Devas , to Kailasha- Shiva’s majestic home , to Brahmhalok — home to the creator if the universe , Vaikuntha — the serene home of Sri Vishnu and on earth — home to us feeble humans . He often went to Pataala — and was welcomed by the demon kings too. A Manas Putra (mind’s progeny) of Brahma — he was cursed by his own father — that he won’t be able to stay in one place and has thereafter been a constant roaming presence .

Narada is visible across yugas from Satya yuga to Treta and Dwapar- an immortal presence , being a great Guru to numerous bhaktas — from Dhruva to Prahlada to Vyas and Valmiki among others — guiding them on different paths -but all of which lead to Sri Hari . Always seen with his Kartaal and Veena — Narada is always singing God’s glories and trying to please him through his alluring music .He is famous for the supposedly ‘ungodly’ activities of spreading gossip and information and also subtly inciting and instigating jealousy and conflict .That’s why even today the gossiping social butterfly kind of family members are often called Narada Muni .

One of the glorious descriptions in Vishnupurana says, “Naram nar samuham Kalahena dhyati Khandayatiti.” The one who is a fomenter of disputes among people is Narad. But he is never malicious or vengeful and never has any vested interest. He works for the ultimate good.

He tattled to Kansa , the king of Mathura — that the 8th progeny of his sister Devki would be his death and would eventually rule the world . This lead to Kansa murdering all the newborns until Sri Krishna somehow escaped his clutches by divine play (Leela). In the first sting operation of the world , Narada took to Sri Vishnu the news of the cruelties being done by the demon king Hiryanyakashyapu to his son and Vishnu’s bhakta Prahlada and pleaded with Sri Hari to take the Narsimha avatara . Even before that sting operation, Narada being the fearless Dev Rishi (sage of the devas ) took to Vishnu the stories of the corruption and ill intentions of the Devas and protected often the victims of the misdeeds .

Narada had the complete news of the world — he knew exactly what was happening , where and with whom and was often there as a divine messenger to shape the course of events — and therefore like Google was relied upon by the ancient kings and gods to really know the truth and the happenings across the Universe .

Through this series I hope to tell some interesting ( known and unknown ) tales of Narada Muni — the vedic sage , the divine messenger , the immortal bhakta , the great guru and the foremost devotee of Sri Hari . I will start with the story from Bhakta Prahlada’s life but it’s a story that starts before his birth .

However Hiryanakashyapu was obsessed about ruling the world and being more powerful than Vishnu and he decided to do penance and please Lord Brahma .Hiranyakashipu instructed his minister Vidal to look after her well, as he loved Kayadhu a lot. And soon after entrusting Vidal with the responsibility of taking care of his kingdom, Hiranyakashipu started performing austerities to please Lord Brahma. Indra on learning about Hirayanakshyapu’s penance became nervous and decided to kill the unborn baby to save this throne . But Narada took this crooked tale to Sri Hari and Bhagwan always guarded the baby .

Indra made the most of Hiranyakashipu’s absence to abduct Kayadhu after killing Vidal, who battled with him with utmost bravery and valour. Kayadhu pleaded for mercy and appealed to Indra not to do anything that would be unbecoming of a Deva. But Indra drunk in his triumph and arrogance refused to heed the desperate pleas . Unbeknowest to him someone was listening — the universal journalist- Narada.

When Indra dragged a pregnant Kayadhu to the Deva Loka, he bumped apparently accidentally into Devarshi Narada Muni. And that’s when the sage showed him the mirror and made him realize that how gravely he had sinned by abducting a pregnant woman. Back in his senses, Indra felt ashamed of his deed.

He apologized to Kayadhu and left her under the protective custody of Narada Muni..

Hiranyakashipu, who wanted to eliminate Lord Vishnu, was oblivious of the fact that his wife Kayadhu and his unborn child were chanting the name of Lord Vishnu, coached and inspired by Narada Muni . Dev-rishi ensured that the unborn child got the blessings of Sri Hari and did not show demonic traits of the Asura Hiryanyakashyapu. Under the guidance of Narada, her unborn child later named Prahlada, became affected by the transcendental instructions of the sage even at such a young stage of development

In this manner Narada played the crucial role of an enabler of Sri Hari’s leela and laid the foundation his role in Prahalada’s life much before the Narsimhavatar. More on that next time . Jai Sri Hari !

PS : I offer this humbly at the feet of Sri Hari . The idea of the series is inspired by Sri Devi Om didi to whom I remain indebted . Would love to hear your thoughts and feedback dear parivaar.

Exam Fever
What you do is not important.