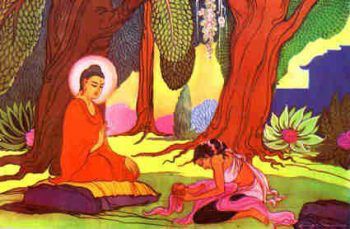 In one of his sermons, Buddha narrated the story of a grief-stricken woman called Kisa Gotami who was going from house to house carrying her son’s body in her arms. In desperation, she was looking for someone who could revive her dead son. People guide her to the Buddha. He, they said, was the only one who could help her. Kisa Gotami is ready to hold on to any glimmer of hope. She approaches Buddha and requests him to bring her son to life. Buddha senses that she is distraught and beyond reason. He does not break out into a discourse straightaway. Instead, he guides her to get a handful of mustard seeds as alms from a house that has never witnessed any death. She goes around the city in a frantic search for a home like that. People pity her state, some empathise with her, but none can help.

“Do not remind us of our dead, lady. Their memories bring grief.”

What happens next in the story is very interesting. The act of talking to people and begging for alms, and knowing the bitter truth settles her restive energy. Kisa Gotami takes time to assimilate and reflect. She observes the city’s flickering lights: they come and go much like the ephemeral human lives. Gradually, the thought dawns on her that she has been quite selfish in her belief. She realises that death is an eventuality, the only certainty. Having gone through her share of observation and scrutiny, she gets ready to receive Buddha’s sermon about pain and suffering.

What strikes me is the importance of silence, solitude, and reflection in the story of Kisa Gotami. Despite being in the presence of Buddha, she was hardly in a state to receive. He gracefully guided her into the world, where she learned the truth. Most importantly, she had to spend time in contemplation. This is what the word ‘Satsang’ connotes to me at the level of an individual. He/she will have to go through the mental, emotional tussle, face the truth and meditate upon it—Satsang’ with self.

‘Satsang’ or the practice of being with the truth, is two-pronged: individual (solitude; spending time contemplating about truth) and collective (gathering of people sharing common belief and working towards a common purpose, trying to know the truth)

A community of like-minded people with a well-defined purpose can empower an individual. Fellow ‘Satsangis’ form a ‘tribe’ that provides valuable insights and support when needed. Doesn’t it happen often? When you are confused or downhearted, help comes in the form of a Black lotus thought for the day, a pic/song/post or video shared by another seeker? We live in times where this connection is possible via video conferences and whats app chat groups. Nothing can discount the importance of a physical setup, however.

Let me share from my own limited experience. I had been thinking a lot about conditioning, and one morning I woke up a muddled mess. Side effects of overthinking, you see:P What gave me grief was the thought that having gone through all the conditioning in life to align with the world, I now had to drop all that conditioning and go back to the age of innocence. ‘What a whammy?’ I thought. A friend, who is a seeker, and a student of Indian philosophy came to my rescue. Unwittingly, she shared an article where she had posed a similar question to her teacher. The teacher answered, ‘yes, you would have to decondition, but you will do it consciously this time.’ For the time being, the answer made sense and satisfied me. It also taught me the valuable lesson that one needs to seek within and without. Some people have already asked the questions you are grappling with, and they have insights to offer. But, as always, it’s a tight rope to walk—what to ask, when, to whom, and how to receive and imbibe the answer gracefully.

The idea of Satsang as a gathering is prevalent across all religions. Consider Sunday masses, choir singing (Christianity), kirtans, Satsangs and Samagams (Hinduism, Sikhism), majlis, and namaz (Islam). Similarly, Buddhism emphasises the importance of ‘sangha’ or community for spiritual growth. Invariably, prayers and chanting become the pivot of ‘Satsang’ as a group. I feel there is strength and energy when people pray together. Not everyone is a perfect singer; there are discordant notes, yet it all blends as a single powerful, harmonious sound.

The only flipside to spiritual social gatherings is that they can quickly veer from the purpose. As a child, I often got to attend Satsangs with elders. The Satsang would begin on a sanctimonious note replete with discourses, bhajans, prayers, and meditation. After the Satsang, people would emerge pure and vulnerable with a spillover of bhava. However, if they socialised or talked for too long, invariably, the conversation degenerated into brickbats and criticism. The time from the morning Satsang to the evening Satsang used to be a case in cruel irony.

It, therefore, becomes important to be mindful when with people because before you know it, you might start acting like a frisky reporter of an over-the-top news channel. And the bad news is, it will all seem NORMAL.

Satsang in a group can provide the necessary vigour and discipline if approached with mindfulness and purpose.

What Does Being an Orphan Mean
आशीर्वाद 😍