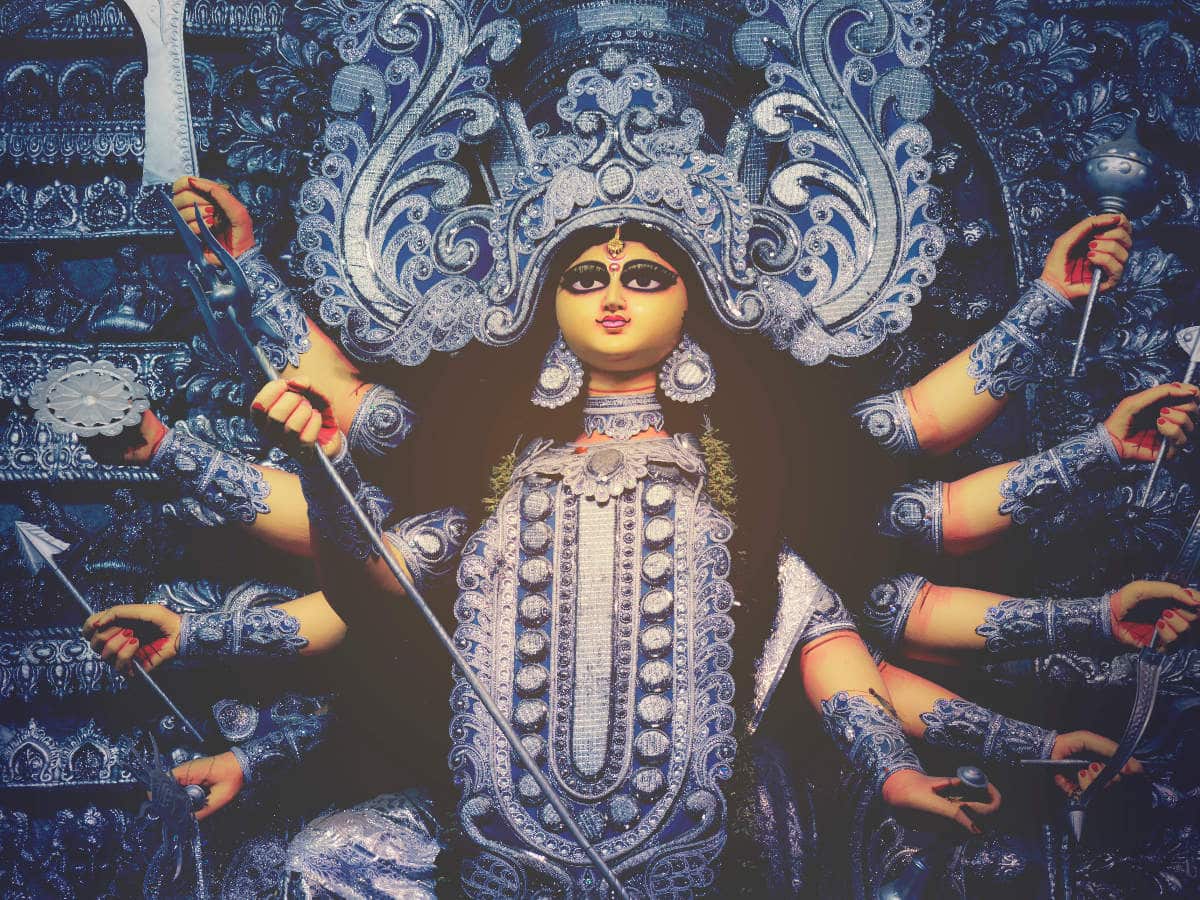 The Story of Dhyanu Bhagat

Hello everyone 😄 i hope everyone is safe and happy and enjoying their lives 😇 i was thinking what to write and suddenly a thought came in my mind… that i should write on excellent devotees 😃 so here i present a story of dhyanu bhagat… who was the devotee of maa jwala ji … who is the presiding deity of jwala ji shakti peeth 😁 where mata sati’s tongue fell.

Jawala ji has since times immemorial is the greatest pilgrimage site for hindus. Akbar once tried to extinguish the infinite and ever glowing blue and red flames of the temple…by covering them with iron disks and channelizing water to them. But the flames blasted all these efforts. Akbar then presented a gold chattar to the goddess as a sign of respect for her immense powers…However, his cynicism at the power of devi caused the gold to convert into another metal which is still unknown. His belief in the goddess was all the more strengthened after this incident.

This is the incident of the days when India was ruled by Emperor Akbar. A resident of Nadoun Village,Dhyanu Bhagat was visiting to Jawala Maa Darshan with a thousand devotees. Seeing such a large crowd, the Emperor’s soldiers stopped them and brought Dhyanu Bhagat and presented him to the court of Akbar.

Akbar asked, “Where are you taking so many men along?”

Dhyanu Bhagat replied with folding hands, “I am going for a darshan of Maa Jwala Devi. These people with me are also devotees of Mother goddess and are going on a pilgrimage.”

Akbar heard this and said, “Who is this Jwala Maa? And what will happen by visiting there?”

The devotee replied, “Jawala Maa is the creator and preserver of the world, she accepts prayer from her devotees and fulfills all their wishes. Her glory is such that at her place, flames keeps on burning without any kind of fuel. We all visit her every year for her darshan”

Akbar said, “how can i believe that your Jawala Maa is so powerful? After all you are a devotee of the mother, if you show any miracle then we will also accept it.”

Dhyanu Bhagat answered very calmly. Sir! I am a small servant of the mother, what miracles can I show?

Akbar said, “If your devotion is true, then Goddess Mother will definitely preserve your honour. If she does not take care of devotees like you, then what is the use of worshiping her? Either she is not worth a Goddess or your devotion is a falsehood. For the test we cut the neck of your horse, you will be able to get him alive by praying to your Goddess. ”

After leaving from there, Dhyanu Bhagat along with other devotees reached and gathered in the Jwala Maa Temple. After bathing, Devotees worshiped the Goddess throughout the night by singing bhajans, reciting aarti and singing her glories. Next day morning, Dhyanu said, “Oh Maa! You are residing in my heart…you are antaryami.The King is testing my devotion, Please keep my honour. Please give life to my horse with your miracle. If you do not accept my prayer, then I will cut off my head and offer it to your feet, because it is better to die than to live ashamed. This is my pledge. Please answer.”

There was silence for some time. No answer was found.

After this, Dhyanu Bhagat cut his head with the sword and presented it to the Goddess.

That very moment, Jawala Maa appeared and the head of Dhyanu Bhagat got fixed to his body and he stood up alive. Mother said to the devotee, “The head of the horse has also got fixed to its body. Leave all your worries completely. The reason for being ashamed has been solved and ask for whatever you desire”

Dhyanu – The devotee, bowed down at the feet of the mother and pleaded, “O Jagadamba! You are all powerful, we humans are ignorant, i do not even know the method of devotion. Still, the Holy Mother! Please don’t take such an extreme tests of your devotees. All cannot offer you their head. Please, O Mother Goddess, fulfill the desires of your devotees with ordinary offerings.”

“So be it! From now on, I will fulfill the desire of my devotees…by an offering of a coconut instead of sheesh(head) and a prayer with a true heart.” By saying this, the divine Mother disappeared.

Here this incident happened, in Delhi the horse’s head got attached to his body with the grace of the Goddess. After this the king and all his ministers were shocked and surprised. The king sent his soldiers to Jawala Ji. The soldiers came back and told Akbar, “There are flames of fire emerging from land, Perhaps the miracle is happening because of the flames. If you order, then we will extinguish these flames, By this way the place of Hindu Worship will also be destroyed.

Akbar Approved this But some historians believe that without the acceptance of Akbar, the royal soldiers did so. It is said that the royal soldiers first kept the flat iron disks on the holy flames of the Goddess. But the divine flames came out and broke the iron disks. After this, the flow of a canal was further twisted, causing the water of the canal continuously falling on the flames. Still the burning of the flames did not stop.The soldiers informed Akbar that the burning of the flames can not be stopped, all our efforts have failed. Whatever you feel right please do so. 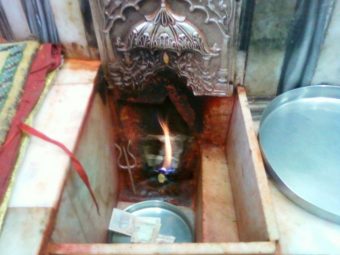 After receiving this news, Akbar consulted the scholars of the court. After discussing the scholars suggested that you should go and see divine miracles and arrange and offering according to the rules and please the Goddess.

Akbar accepted the suggestion of scholars. A grand golden chattar (parasol) was made. Then he put the golden parasol (chattar) on his shoulder and reached Jawala Ji bare feet. Then he had Darshan of divine flames, his head bowed down with devotion, he started feeling guilty in his heart. Then he started saying. O mother, I am offering you a golden chattar. Till date, no king would have offered you a grand golden parasol. Please accept my offering. Speaking with the boastful words, a divine flame appeared on the golden parasol (chattar) and then parasol fell down from Akbar’s hands…And as soon as the golden parasol fell, it changed into a strange metal, which was neither iron, nor brass, nor copper nor any other metal (unknown metal).

Hence, the Divine rejected the offering.

Seeing this miracle, Akbar praised in many ways and asked for forgiveness from the mother and returned to Delhi after performing many prayers. After reaching Delhi he ordered his soldiers to behave lovingly with all the devotees.

Even today, In the Jwala Maa Temple, The fragmented parasol offered by  Akbar is still displayed, which by appearance looks like gold. Weight is also of gold metal. But the metal is still unknown to the world. 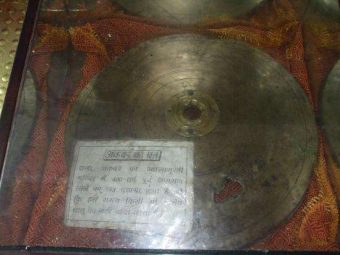 Thank you! i hope you liked the story 😄