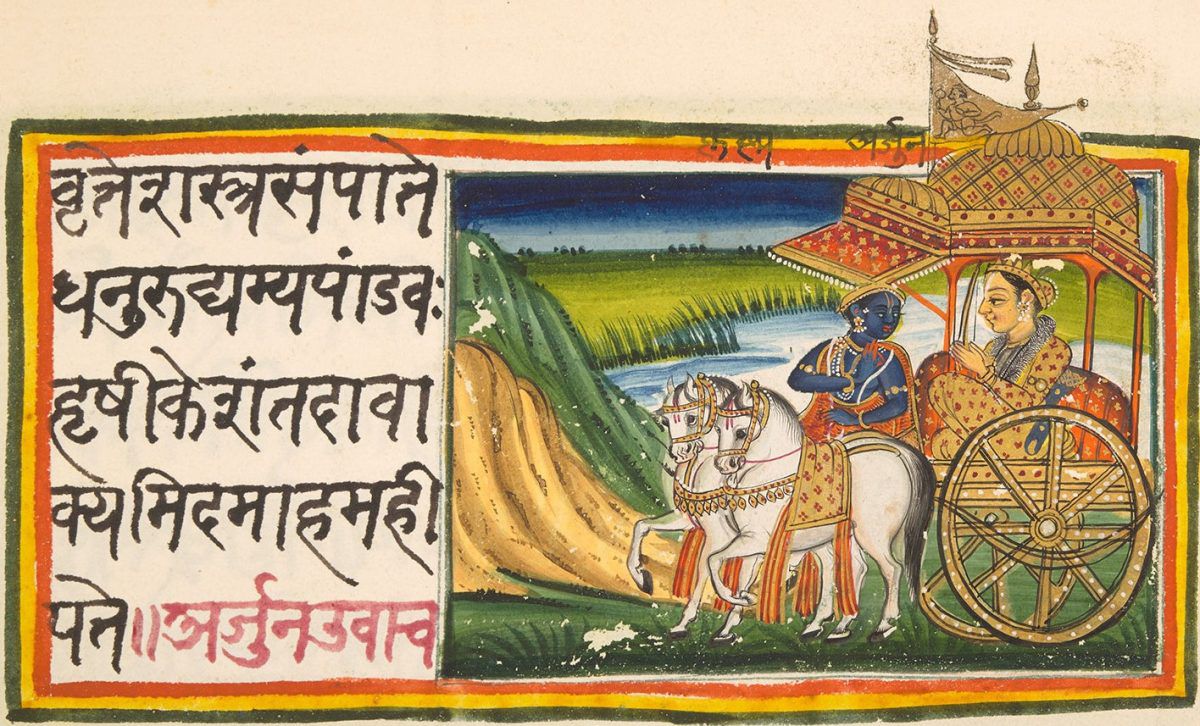 Three Verses from Bhagavad Gita That Attracted Me

I was forced to memorize the Bhagavad Gita in school. My classmates did so. I rebelled, but I too followed suit. I ended up memorizing four chapters. Little did I know this was the seed for me to learn the Bhagavad Gita later in life.

In 2008, when I came to India for a vacation, I had a turbulent summer. One day, serendipitously, I found a copy of The Holy Gita by Swami Chinmayananda in our bookshelf. This was a book that either my brother or I had won as a prize in a school competition. I started reading this book, and it resonated well with me, though in retrospect I didn’t undetstand much of what I read. When I returned back to the US for my second year in graduate school, I continued to have a turbulent time. One of the activities that gave me great peace was to drive down to one of my favorite bike trails in Arlington, Virginia, take a long walk while listening to the Bhagavad Gita chanting on my iPod touch. This also helped me memorize the Gita.

While I didn’t know much of the Gita at all at that time, there were three verses that seemed to be particularly special, and that holds good till this date. Without further ado, here they are:

It took me reading several books by several authors to make sense of this. First of all, that we respond favorably to favorable situations and vice versa is a conditioned response. Second, the law of attraction states that we have it all in reverse. It says that when we possess happy feeling inside us, we attract happiness from the outside, and not the other way round. Marci Schimoff interviews 100 of the happiest people she has seen and concludes that these people have a high “happiness set point”. They maintain a happy state most of the time, and even if they get sad, they bounce back quickly. They are not happy due to some external reason, they are happy for no reason.

This made me open to the possibility that it is indeed possible to get to the state that Krishna mentions – a state of evenness where the dualities are merely transactional and does not affect the tranquility of a person. Rudyard Kipling’s wonderful poem If has a line captures this sentiment, and it is written on the wall of the players’ entrance to the Wimbledon Centre Court:

The first part of the sloka mentions the need to treat dualities with a sense of evenness. Krishna mentions a second step – fighting the war for its own sake. The reason this is so important that it makes us live in the present moment. Doing something for its own sake, rather than for the anticipation of some result.

And finally, having done all this, what great reward am I going to get? “You will not incur sin“, says Krishna. Wow. So, this arduous, insanely difficult set of instructions, need to be followed just to break even. Not doing this, one will incur sin; this must be done just to avoid incurring sin.

ये हि संस्पर्शजा भोगा दुःखयोनय एव ते ।
आद्यन्तवन्तः कौन्तेय न तेषु रमते बुधः ॥ ५-२२॥
The pleasures arising from the contact of sense objects, they are rooted in the wombs of sorrow. Furthermore, they have a beginning and an end. Discerning this, the wise do not hanker after them, Oh Kaunteya!

I wrote about the story of Yayati and his conclusion from 1000 years of enjoying sense pleasures that desires grow stronger when fulfilled. Krishna gives a logical reason why the pursuit of pleasure is an exercise in futility. Every pleasure has a beginning. And that which has a beginning must necessarily have an end. So, in the big picture, what is the big deal about fulfilling this pleasure?

In the Mundaka Upanishad, the Rishi says

Krishna exhorts Arjuna to eschew finite pleasures. The wise, knowing the futility of pursuing desires, do not hanker after them Oh Kaunteya, concludes Krishna.

In the sixth chapter of the Gita, Krishna explains how to do meditation to Arjuna in detail. After listening to the instructions, Arjuna poses a valid question. “Oh Krishna”, he says. “The mind is verily fickle, prone to inadvertence, and is faster than the speed of the wind.” To which, Krishna responds with the above Sloka. This gave me great hope and courage when I heard this initially. The seemingly impossible task of mind control can be done with persistence and by displaying dispassion towards distractions.

Do you have any favorite verses from the Gita? I’d love to know!
Image Credit – By Unknown artist