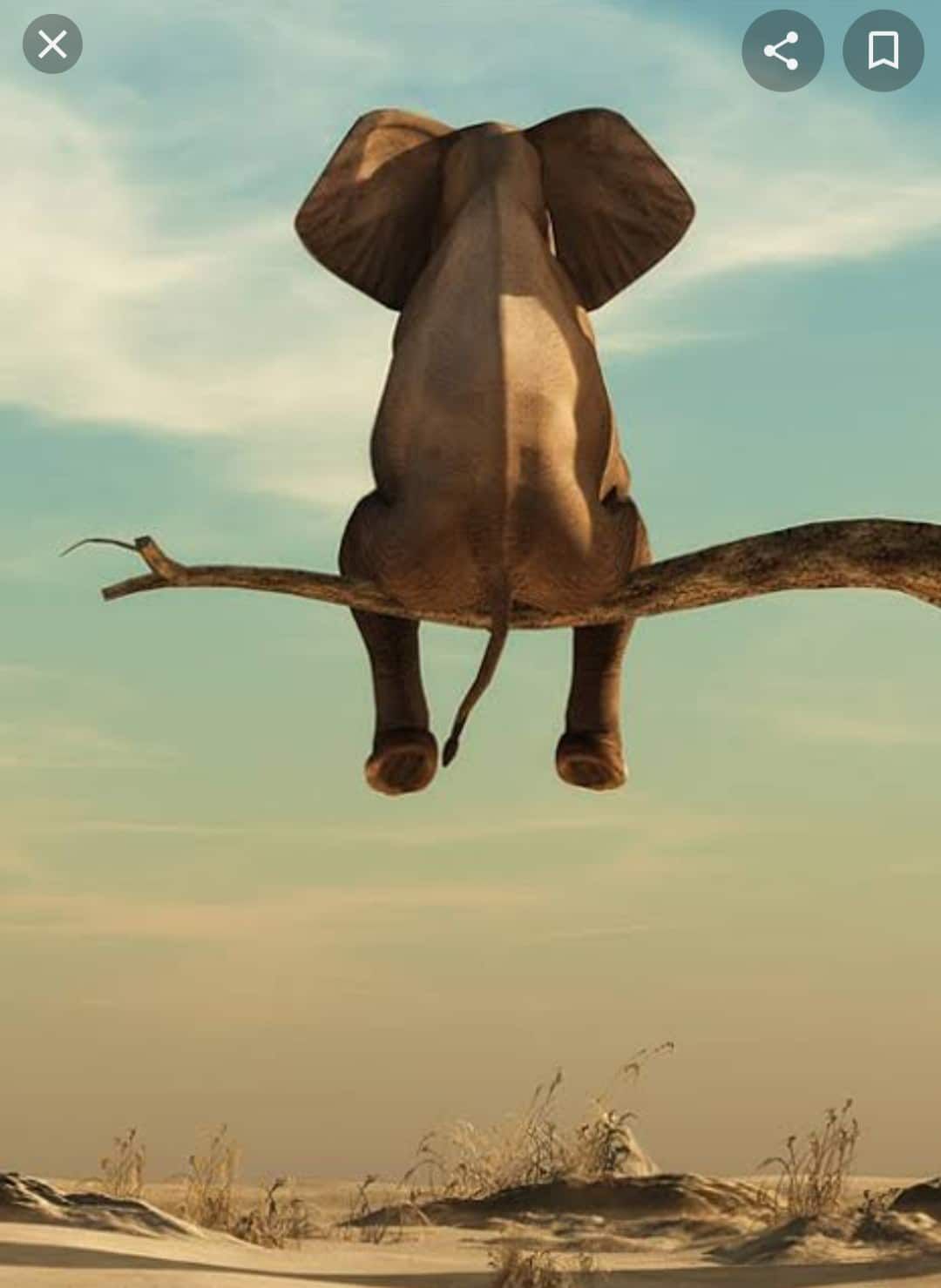 After looking at the picture of an elephant sitting on a branch of the tree, my creative juices detoured and my mind went into the state of inaction itself. But this afternoon, when I was listening to music while taking a nap, something beautiful got woven into my mind and lo! It was a story of the elephant named Molly, sitting on the tree in the picture. In many ways it doesn’t fulfill the requirements of the competition but somehow the creative piece was resembling a story of our lives…so here goes the story…

Molly lived on the distant island of Elephantia with his parents and a baby sister. As a child, Molly always dreamed big. He would think that once he became big like his parents he would climb the highest mountain of their area that stood far away, crossing various jungles and a large desert. He would also daydream about filling up 20 litres of water in his trunk altogether and then irrigating the vast lands, becoming the strongest and most reliable elephant of their tribe.

Molly with all zest carrying inside his heart for living a purposeful life, learnt everything that was possible. He worked sincerely, and  also showed compassion to all other creatures and with his smart wits he even learned different sounds and words of human beings from the men who came down to their island for hunting.

The time passed beautifully…but as the responsibilities piled up with the coming of age they took away all the enthusiasm of Molly, leaving behind a meaningless life to pass. He still had his childhood dreams flickering in his mind but their flame was not enough to make him work in that direction.

Every morning he would wake up with a new promise of doing something new and creative, but at night he would fall asleep with his guilt filled mind and lower self esteem snuggling him in.

One day, he asked his little sister what should be done to have purpose in life and to get less exhausted everyday, with the expectation of hearing some fistful words of motivation. With little experience did she have, she suggested,” Molly! Just relax and don’t worry about anything, all the things will fall in their place when the time will be right, you just love yourself and have a break.”

Molly nodded with every word she spoke and contemplated on the advice that her little sister gave him.

“I  must take a rest as my sister says. It’s true that our species is known for wisdom, sincerity, peace, and stability but it is a generic notion and absolutely not applicable to everyone. I can be an exception. I must put my dream for purposeful life to rest and just wait for the right time for them to come true,” Molly thought.

Molly would now sit idle for days and snored the whole night. He could not work anymore, thinking he needed rest and time to love himself. Discipline was something that he thought was getting hard to oneself and he must not treat himself like that.

Days, weeks and months passed…Molly put on 25 kilos, he could not sit or walk like before. He became the object of mockery for everyone. No matter how hard he tried to do something, he failed every time as if some mental blockage had clogged the way of whatever he thought of doing.

All his power drowned into an ocean of guilt and shame. Fed up of all the overthinking and inactivity, he went to the outskirts of the jungle, one day and walked to his favorite tree, which was the only source of peace he could find in his messed up life. This tree remained withered for almost the whole year and had just one or two branches. He pulled its branch down with his strong trunk and sat on it. As he sat down with his heavy body, the branch moved into a see saw motion for some time and then stopped.

Molly looked at the desert that spread into miles just before him, with a sulky face. When he tried to look farther, the mountain that he dreamt of climbing in his childhood stood in the same way and stared back at him as if asking him something.  At the right, the crops stood waiting about the ones he fantasized of irrigating with his strong trunk.

He murmured to himself, ” Dear Molly, you have the pair of legs to walk and climb the highest peaks, you have a strong trunk to irrigate the crops and make them dance with their lush green grass…Molly why are you unable to do anything anymore…what makes your life look less enthusiastic than ever before? Have you led yourself astray by the idea of self love and misunderstood what your sister advised you? Or you just don’t know how to work in the direction you need to work in?

Suddenly Molly stopped murmuring as soon as he saw a human female and a baby walking hand in hand and coming near the tree. Both the humans came to the tree and sat beneath it with their backs resting on its trunk. The female seemed like a mother to the baby with her. She was panting while the baby was settling himself to sit cross legged. She pierced the whole landscape with her squinted eyes and then after the moments of cooling down, she took her baby into her lap and took out a book from a bag she carried on her left shoulder.

The book had a velvet cover of wine shade. She opened the book and started narrating something from its pages to her child. Molly had mastered a few words and sentences of human language and could understand what the story was trying to convey. He now listened to the story very carefully as the lady started reading it a little louder while making gestures with her hand and sometimes even thumping the fist on the ground when something powerful would come into the story.

The words that were coming out of the lady’s mouth seemed magical to Molly. They made meaning to him as she recited these words to her baby. The words were,

” TOUGH LOVE is the way to a meaningful life my child! Self love doesn’t mean the absence of discipline rather discipline itself is a form of showing care to oneself. Face inaction as a challenge in the path of your disciplined life…never give up on your dreams or hard work even when the adversities knock at your door…love yourself but don’t forget to include tough love into your basket and you will see the magic unfolding…”

Molly had his moment of realization through these remarkable words of wisdom. He knew what was lacking in him and what could turn his inertia of rest into the passion he had for life during his childhood.

The whole island was filled with the trumpet sound made by Molly and his friends. They all danced in excitement, celebration and love, sorry Tough love! 😉

Astrology As a Self-Analysis Tool
Go On , Explore Yourself