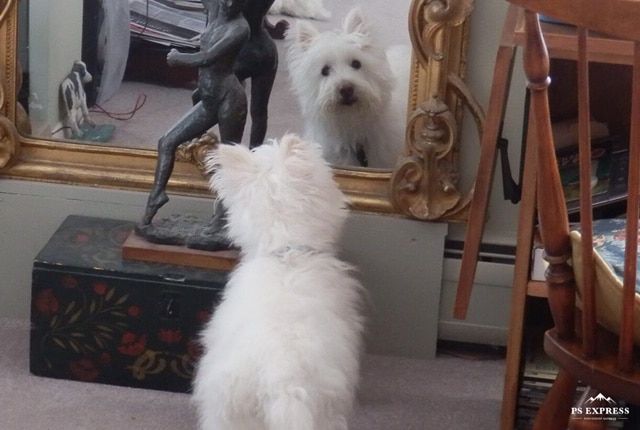 Be careful what you wish for

Be careful what you wish for

When we decided we wanted to get a West Highland White Terrier, I was ecstatic!  We named her Phoebe and she was a wonderful little dog. I  dreamed of breeding her someday and picking the very best puppy to join the family.

I began looking for a mate for her when she was old enough and found one fairly easily only a few miles from us.  The breeding was successful but she did not conceive.  We tried again and again with no success.  I found another mate but once again she did not conceive.

Then we moved to Maine and I was determined we could find a suitable match up here  and we did!  We drove 3 hrs to meet and the dogs bred almost immediately.  Somehow in my heart I felt it was useless. BUT, I was wrong and week by week her little belly got bigger and bigger.  On the 63rd day she delivered NINE puppies which was unheard of in a 20lb dog!

Every puppy was a perfectly white, perfectly healthy, little bundle with a little black nose. Not even a runt!  And we could not tell one from the other.  However before they were 24 hrs old we found one alone and cold.  I warmed him in a snuggly towel and fed him with an eye dropper.  He was starving and I had to limit his milk! We put him back with his mother and he appeared to be nursing but a few hours later he was alone again.  So for 3 1/2 weeks I fed him goats milk with an eye dropper and he thrived.  Unfortunately, I soon discovered he did not respond properly to stimulation, but how could I give up on him?  I named him Razzle for his sort of jerky and unnatural movements.

When he reached 4 weeks old the other puppies picked on him and we had to separate him if we went out.  He never objected in any way. So while the other 8 puppies played and wagged their little tails, Razzle stood alone oblivious to the world.

Then one day my husband announced “You know we have to keep him.”  And my reply was, “Oh no we don’t!”  He went on to tell me that anyone else would kill him!  Gradually I resigned myself to this situation.

Little Razzle never responded to our voices. He developed an eye infection at 7 days which affected his sight.  He never had eye contact till he was 4 mos.  He couldn’t climb stairs until he was two.  He was very difficult to house train!  And at 8 mos he found his voice and would have spasmatic barking fits that we were unable to stop.  Oh did I tell you he didn’t like to be touched?  He was a perfect case of Autism that we could imagine.

But he was the cutest dog ever!

So my life had become very difficult and although my husband was so very compassionate towards Razzle (more than I)and there were times when we took turns helping each other to keep from totally losing it!

The years passed by and I must admit, I was somewhat bitter about how things had worked out.  I thought many times about humans expecting a perfect baby with all of the joy they had imagined fulfilled in their lives, only to have a child with physical or emotional issues that forever interrupted the peaceful, loving home they had dreamt of.

In the fall of his 14th year he began to fail.  It wasn’t a big surprise because small dogs often live into their teens.  So we carried him in and out of the house to do his business and carried him up to bed at night.

Then in January I received an email that Krishna Das having a 5 Day retreat in New York in September.  We had been following him for a few years and felt a true devotion.

So after discussing it with my husband we agreed that we could make it our 40th anniversary trip! I immediately bought tickets and I was over the top excited!  We had a pet sitter and friends to help with Razzle and our Siamese cat, Shelby!  Whoopie!  After all, Razzle couldn’t possibly last 8 more months…..?

In April Razzle became very sick and was diagnosed with cancer.  The vet said he probably only had a couple of weeks.

Within a couple of days that little dog was doing much better.  I found myself analyzing his every move in search of his true condition.  After all I still had 4 months before the retreat. But even with our busy spring and summer passing by as it always does, Razzle continued to hang on.

I began to feel quite desperate, all the while praying to my God and Guru, Meditating deeply morning and night. He would not do this to me?  It makes no sense that he wouldn’t let little Razzle pass in time for me to go to the retreat, would He?  But nothing changed and I was overwrought with fear and disappointment.

About a week before the retreat I talked to my husband about who could care for Razzle when we were away.  Oh Lord, help me…  He said “We can’t go and leave Razzle in someone else’s care now.  I won’t do it!”  My world just collapsed.  I knew he was right. Absolutely!

After that, a great peace came over me. I saw myself for the selfish person I had been, wanting what I wanted, when I wanted it and never realizing it was God’s leela, and His teaching from the moment He put Razzle into my life.  The retreat was no longer important as the realization of this precious life that had been given into my care.

Razzle did not do this to me. It wasn’t his fault that he was born with such adversity and difficulty.  All of the times that I was SO angry with him I could scream, and occasionally did, he was simply incapable of understanding.  I then began to see him as the most precious little soul.  My whole self became focused on what little time I had left with him.

We all have the choice to go with the flow of the river or against it.  It amazes me of the vast amount of time and energy I wasted in attempts to make things work the way I wanted them to.

He passed 6 weeks later, 3 days before his 15th birthday.  On the way to the vets office, he lay limp with his head down on my lap for the very first time. When the vet gave him the shot, I sobbed uncontrollably like I never thought I would.  We took him oome and buried him in our back yard.

Thank you to Deepali for encouraging me to write this story.