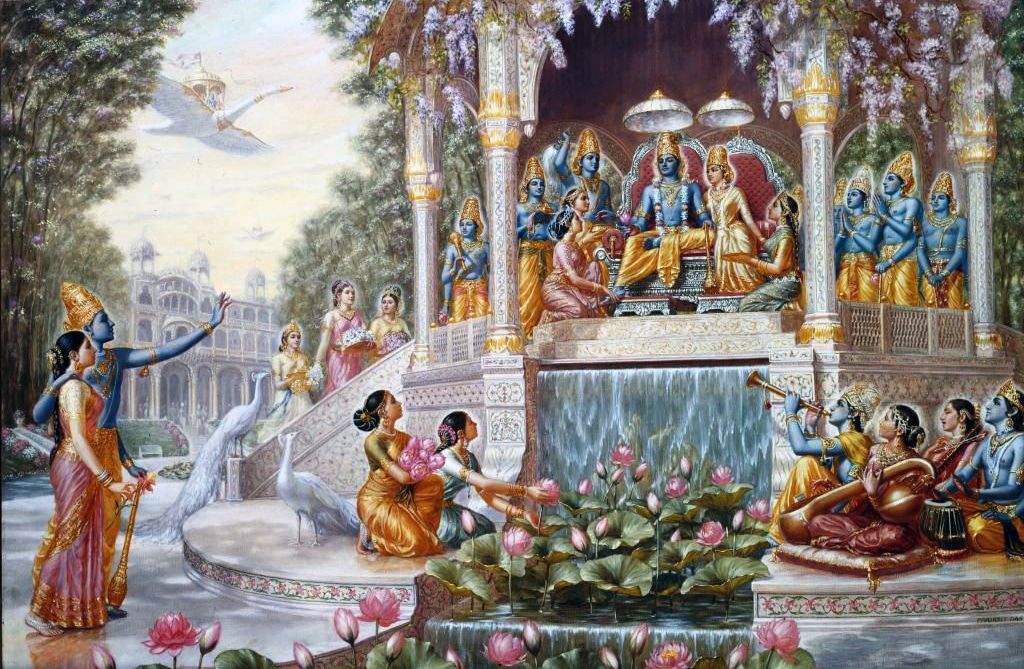 Exploring The Vishnu Sahasranama In The Abode of Lord Vishnu

This post today is to share something I hold very dear and close to my heart – The Chanting of Divine Names. Chanting the Lalitha and Vishnu Sahasranamas is not just something that gives a lot of joy to me but also something that has brought about a gradual but profound transformation in my being over the years.

After a few years of chanting the Vishnu Sahasranama, what began as self study and contemplation on each of these thousand names every day, a group on Whatsapp was created in July 2020 by Dipti Om ji  along with some like minded devotees. The idea was to share the learning and imbibe the teachings of our beloved Swamiji and Siddhas of the lore, who offered deep insight into the essence of each name.

A human mind is in no way qualified to even attempt deciphering the meaning of Bhagwan’s holy names. In fact, it is rather an audacious thought, for a tiny drop cannot comprehend the depths of an ocean unless the drop merges into the ocean and becomes the ocean itself. However, as seekers of truth, with love and devotion for Sri Hari in our hearts, stemmed a deep desire to learn about Lord’s names in the Vishnu Sahasranama. One cursory glance at any number of books written on the topic will make one aware of the wealth of knowledge that surrounds this seemingly small topic. Meanings of the names found in the Vishnu Sahasranama highlight one important thing. What we know about God is just a fraction of what we do not know. But what we know from these names in itself gives plenty of means and ways to celebrate and get absorbed in Him. The names in Vishnu Sahasranama offer a lot to contemplate about. The more we contemplate, the more we get absorbed in the beauty it offers. It took few years before the interest in the Vishnu Sahasranama expanded from mere chanting to knowing a little bit more about its purpose, meanings of the names and its significance. Soon this large body of study became too large to just contain in a group.  These detailed contemplation on Bhagwan’s names in Vishnu Sahasranama have now shaped into a consolidated website for easy reference, accessible to everyone for reflecting on the blessed names of Lord Vishnu. Detailed insights into the first ten verses of the Vishnu Sahasranama have been uploaded on the website, as we continue this sadhna of Naam Smaran, Chintan and Manan, walking into Lord Vishnu’s celestial abode – The Vaikuntha. True Vaikuntha is where HIS glories are sung with devotion.

i.e., “I dwell neither in Vaikuntha nor in the hearts of the Yogins, but I dwell where my devotees sing my name, O Narada.”

What better way of singing His Nama than by reciting Vishnu Sahasranamam!

Once we started researching and delving into the deeper meanings of these names in the light of the messages given by various enlightened Masters, we realized that there is a treasure of knowledge hidden behind these thousand names. There is much joy in reading about the beauty of Lord Vishnu’s various names when it doesn’t remain a mere intellectual exercise, but becomes a tool for transformation in the way we conduct ourselves in our daily lives. It has been our desire to share what we have learnt in the realm of our expanded interest in self purification through these blessed names.

Meaning “In the age (of Kaliyug) the only means of deliverance is chanting the holy name of God”. Naam Jaap is the surest and easiest way of purifying and pacifying one’s mind and aligning our energies. The scriptures define tools of transformation which include the five human values of truth, love, peace, right conduct and non-violence that must be employed every day. The super glue that connects these tools and the people who employ them is naama smarana – the relentless chanting of Lord’s name.राम से बड़ा राम का नाम  – The name of God is everything. Its glory is as inestimable as the glory of God Himself. The Viṣhṇu Sahasranāma says that names (namani) are gauna i.e. based on gunas or attributes – (yāni nāmāni gauṇāni). They are not mere empty sounds. The Bhāgavata Purāna says that the names of the Lord are each expressive of the fame, exploits, divine pastimes and greatness of the Lord. Just as the Lord’s manifestations are infinite, His names too are also infinite.

Why this website when there are already so many existing on this subject?

There are many translations, explanations and commentaries on Vishnu Sahasranama but we haven’t come across a detailed one on a single platform that fills ours heart with a lot of love and joy for the Lord, inspiring one to work on self purification. Every name is interpreted differently by different authors and that is the greatness of each name. The meanings shared on the website, after deep daily reflections on the divine names, is an attempt to achieve a very detailed and exhaustive compilation in order to gain a comprehensive understanding from the classical commentaries expounded by renowned authorities on the subject as well as deep insights gained from the words of saints, mystics and our revered Guru. Guru Vakyam from our beloved Swamiji and pearls of wisdom from many enlightened saints is shared for each name as an interpretation guided by Sant Vani (Words of Saints) to help imbibe the name as a living value system, every sadhak walking on the path of truth to Vaikuntha Dham would aspire to inculcate pertaining to each one of those thousand names.  Two commentaries are referred constantly- The Shankara Bhashyam, an eloquent commentary written by Adi Shankara (the quintessential hero of vedic revival in India) and Bhashya of Sri Parasara Bhattar. These commentaries have several translations and is also the basis for many other commentaries written by others. Unfortunately there are hardly any comprehensive commentaries in English language in print and on digital mediums. There are a few books and websites that provide short meanings on the names but as such there are no major detailed texts based on authoritative commentaries in the English language.

Vishnu Sahasranama chanting with deep faith and conviction, after knowing the meanings results in a joyful heart that is deeply content. This exercise leaves us in no doubt that the omnipotent, omniscient and omnipresent consciousness represented by Lord Vishnu is impossible to comprehend intellectually. We may transcend the limitations of our puny minds by constantly reflecting and contemplating on the infinite forms of Sri Maha Vishnu. Vishnu Sahasranama truly offers thousand ways to transcendence.

Lord Vishnu is the all pervading administrator of the universe. He puts in place, the laws of the universe and administers the universe as a strict disciplinarian, yet he is highly compassionate in nature. He presides over not just this universe, but all the seven planes of the multiverse. All that we see is indeed Lord Vishnu. Sarvam Vishnumayam Jagath – asserts the Vedas. i.e., The Entire Cosmos is a Manifestation of Lord Vishnu. The first Shloka of Isavasaya Upanishad says – ‘Isavasyam idam sarvam‘. All that is here is Divine! This means everything that is around you is filled with divinity and are essentially divine! Concepts of eternal condemnation and a permanent sinner does not arise in the Sanatan Dharma.

When everything is filled with Lord Vishnu, what can we offer Him? The only thing He seeks is our Heart! Our Heart should yearn for Him, turn towards Him and Finally be ONE with Him.

The abode of Lord Vishnu – Vaikuntha Dham is supposed to be the Supreme one. He has prescribed various paths through which one has to travel to reach His abode, the point of no return for a soul known as liberation.

We(Dipti Om Sanghavi, Mallika Pandey, Vyjayanthi Mala and I) invite you on a virtual tour of Vaikuntha Dham, expounding His greatness and venerating His attributes at https://vaikunthanath.com/

A video rendition of Sri Vishnu Sahasranama has been offered to Bhagwan Sri Hari in Vyjayanthi’s sweet voice on the home page. I hope it touches your heart as much as it did mine.

We hope you find the readings shared on the website useful. The purpose of this endeavor is fulfilled if it helps in garnering a greater interest and desire to chant the Vishnu Sahasranama with devotion and mindfulness. Any value you find in this attempt belongs to the Lord and any mistakes that may have occurred is attributable to a limited human mind’s minuscule attempt to know about the limitless existence of the Lord.

A crazy cuckoo in love, singing glories of my Mother Divine; a teardrop at the pink lotus feet of my Master, a nobody, just a happy bundle of life, full of my Mother's joy who only wishes to spread loving kindness, smiles, hope and compassion around, truthfully treading the path that my Master lights in his playground. I am not a Bhakta, I am not a Gyani, I am not a worker for the Lord. These are only what I aspire to be blessed as. What am I then? A tool in the hands of my Master, a flute blown by the Divine Enchanter, a leaf driven by the breath of the Goddess - that's all the labels I would wish to identify with to introduce myself for the rest will fall off anyways.