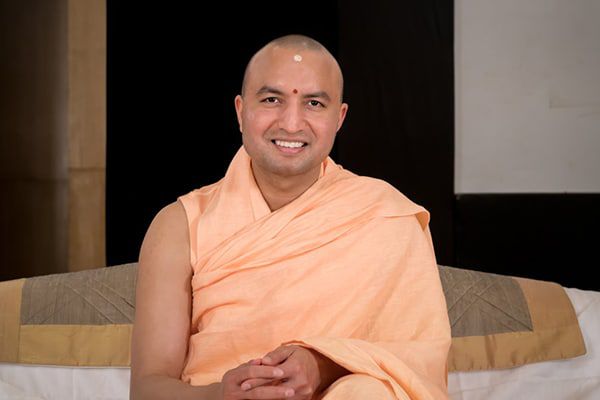 Sastang Pranam Swamiji. Let me continue from where I left in Part-2.

And then, Swamiji arrived at the door designated for his entry into Shri Hari temple accompanied by Vidyanand Swami and Bidu Swami with black face masks and ochre robe. The combination of the trio was just awesome. The temple premises was filled with the chant of ‘Jai Shri Hari’. Swamiji’s walking on the ‘red velvet’ was outstandingly graceful and the way in which he greeted all of us present for the discourse was really heart-warming. Previously, we were told not to try to touch his feet after Meeraji’s misadventure 😉 while he is walking. His eyes were so deep that the entire universe can sink inside them. His smile was beyond any description. One needs to physically witness the smile to savour the nectar of it. Soon after his entry, the door was closed.

Vidyanand Swami took charge of the video recording of Swamiji’s discourse which will later be uploaded in YouTube. After bowing down before the shining black handsome hunk idol of Shri Hari, Swamiji took his seat. I glanced at the digital clock on the temple wall which read 06:30:15 PM (look at the time management!) and at the same time, Samil started crying! Swamiji gently told, any infants in the premises who might cry during the discourse, may be escorted out. Sanghamitra took Samil out and for the entire duration of the discourse she kept on standing near the window outside the temple listening to the discourse. When Sanghamitra was exiting the hall, Swamiji had a glance at her for a couple of seconds.

Then Swamiji started as per his usual style 😊. First, he enquired about the wellbeing of the visitors. He was very courteous, and his words were carrying a personal touch! A warmth that can even melt granite! He wished all of us a very happy Holi and cracked some funny one liner. As it was a bit hot, he expressed the will to switch on the AC, but it would have led to chaos, and he promised that AC will be switched on for the next 2 days of discourse.

He was a bit upset because, during the previous Ashram event, someone who was COVID Positive, attended the events and lot of visitors and Ashram residents including Swamiji himself fell ill. The events had to be terminated abruptly causing great rather grave discomfort to the devotees. Another point of his disappointment was someone entered into the Gabhagrih of the sacred temple where even Sushree jis and Brahmachari ji also cannot enter. Swamiji stressed on the importance of following rules rigorously. I was a bit scared.

But soon Swamiji came out with these funny lines, “you are all beautiful people and please don’t try to be adventurous to show your beautiful faces by lowering or removing the mask. I can see beyond the mask and that is my area of specialization.” The entire hall was relieved and there was audible laughter all around. Swamiji went on adding the significance of Holi and stressed upon the permanence of colour. “Jo rang kritrim hota hai wah jaldi chadhta hai aur utni hi jaldi utar jata hai. If you are attached to wealth, you start worrying if there is some fear of losing it and so on.. So, try to colour yourself in the colour of bhakti to the almighty. Though it is a slow process, once it is established, it will be the permanent colour and it will keep you stabilized in the face of any kind of disaster or disruption in your life.”

I will not write more about what he said in the discourse as I think I am doing injustice to the upcoming videos. I should not play the spoil sports 😉. Actually, I am nobody to describe what he told in the discourse, because listening to the direct source is the best way to learn his preaching rather than me writing something as per my interpretation. But at the same time, I will write some of his nuggets of humours!

After the discourse was over, Swamiji proceeded for Shri Hari Aarti. Sanghamitra came inside the hall along with Samil as she could not stop herself anymore! And what a blessing to watch Swamiji performing the Aarti! Swamiji, Vidyanand Swami, and Vidu Swami started blowing the conch shell in unison and divine harmony for such a long duration at a high pitch that the entire ambience became divine. The reverberation of the sound filled positivity in each and every atom present. The bhakti, the devotion in which he started chanting “Jai jai Aarti Hari tumhari…” and the crowd followed the same was marvellous. If we can perform our Puja even one hundredth of Swamiji’s bhakti, it will be enough for us to get elevated to a whole new dimension.

Swamiji lighted agarbattis and after performing Aarati with it handed over the same to the ever-smiling Raghu Swami ji. At light speed he ejected from the temple and planted the agarbattis at the Tulsi pot with a thud and stormed back! Then Swamiji lighted the diyas and performed the Aarti. After a while, he handed it over to the other Swamijis and took up the lion fur fan to fan Shri Hari. There was a very artistic simple harmonic to and fro motion as he performed this fanning action. It is as if a child was dancing in front of its father in a playful loyal mood with utmost enthusiasm. There was a totally different level of devotion which was visible in his face. I have the expression saved in my heart but cannot put in words. The expression of Sadhvi jis, Sushree jis and Prabhuji was equally divine. I am not able to pull myself out of the bhav!

At the end of the Aarti, Swamiji chanted Jai Shri Hari, Govinda, Govinda, Gooovindaaa… Bolo Parvati Pati Har har Mahadev! I can still hear the echo. After that, Swamiji came out of the Garbhagrih and addressed the gathering in a joking manner, “I have given meeting appointments to devotees. Aap log meeting hall mein padharen, main aap logon ka darshan karunga. Aap log mujhe bahut sara gyan denge, kuch log bolte hi jaenge aur kuch bilkul kuch bhi nahin bolenge aur request karenge Swamiji, aap hi boliye! But please have mercy on me. I am very hard pressed for time. I have to write the Saturday Article which I have not completed. I will be grateful to you all, if you do not take much of my time. Let us meet.”

Then he started moving gracefully and one kid requested him, “Can I play Holi with you?” to which, Swamiji smiled and touched the cheeks of the kid very affectionately. Then he moved out of the temple and proceeded towards the Meeting Hall. We came back to our room and ate the food we saved for night and went to sleep switching on the Hitachi AC. Soon we all fell asleep due to the tiredness induced by the journey.