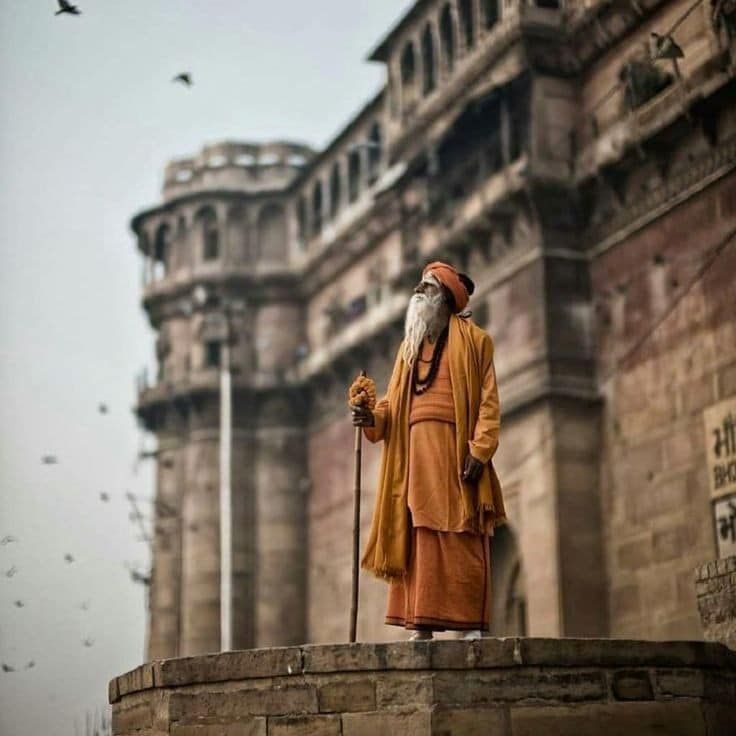 Nanak ,my beloved Nanak is a householder.

In the meantime, an attendant came and said,” your  majesty, a sage has come in the dried abandoned garden and claims that he is, ” NANAK SHAH FAKIR “……

The moment the king heard ,” NANAK” , he stood up and started running barefoot,even though the strong wind could not cope up with his speed. Queen followed him in her plank while pandit ji headed back to his home.

In the garden, a sage with long saffron clothes sat in upright posture.

The king fell straight to his feet, his throat was dried up while his eyes were brimming in love.He paid his obeisance to the saint who pulled him up and blessed him.

The king also sat in an upright posture, the queen and other attendants had also arrived till now. King pleaded to the saint to come to the kingdom along with him so that he can serve him with all his mind, body and soul. The saint replied, ” we are the renouncers, what value do kingdoms have for us ? “.

After hearing his reply, king was perplexed.He thought, ” Nanak ,my beloved Nanak is a householder, he is not a renouncer,” I think i am cheated on for the poor condition which love has festered on me.The king bowed the saint and stood up and walked away with his head down. His heart also got abandoned like the garden, his eyes became  dried as if drought took over . He went to his kingdom in his plank. The whole night he had a heavy head and could not sleep.

Queen: ” Swami ! I have told you millions of times to avoid any arguments with pandit ji.Now see you what rotten condition you are in ! and please excuse me but the sage that has arrived does not carry any fragrance of Nanak. The aura that Mansukh carried along with him, he doesn’t even have a speck of it and moreover, the peace which I felt when I am around you, wasn’t felt when I had his darshan. There is no comparison between him and Nanak.

King : ” Chandarkala I feel the same about him, but I don’t have any energy left from the day long discussion with pandit ji.Please do arrange something that till the morning we can test his reality.

Queen went to one of her attendants and asked her to serve the saint staying in the garden with meat, alcohol and do some arrangements for dance and entertainment.

King couldn’t sleep, however in the early morning, he fell asleep and saw the face of Mansukh with golden aura around him, all the fatigue he had gone through was washed away in his dream. When he woke up, the attendant was already standing beside his bed with the news that the saint was fake and came here to fraud the king.

The Yogi Immortal
Neither a Sinner, nor a Saint