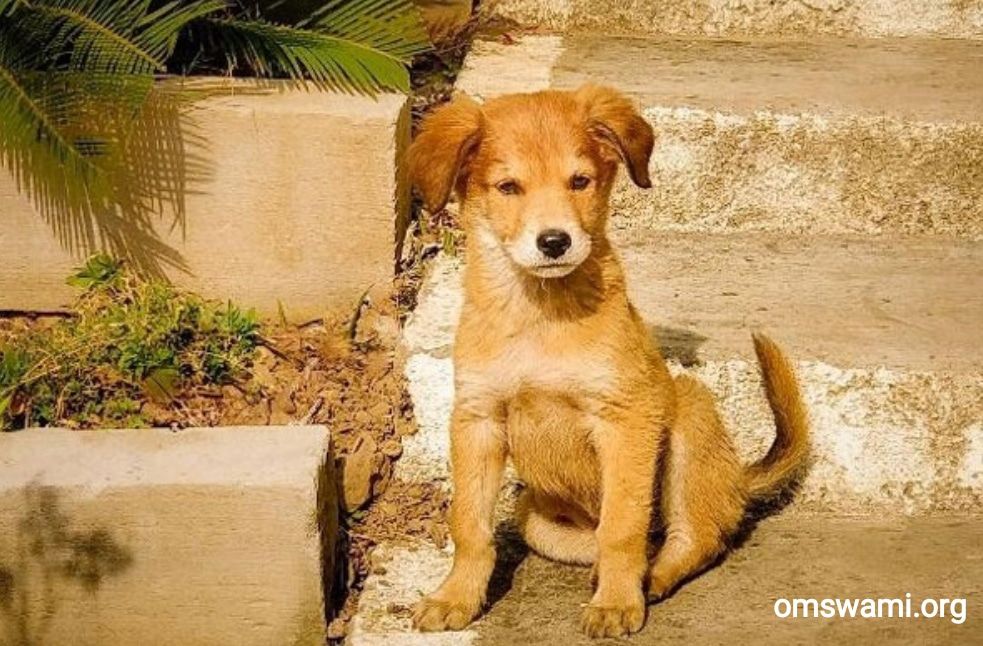 Such a happy news with an suspense story in it! You go Wally!

A while ago when I made a short visitation to ashram. Most of my time was spent with Sri Hari. Literally devouring on Lord’s form for the little time I had in hand. It was so greedy of me. Not even in a good greedy way! Greed for Lord is not always good. And besides being at temple, I met Wally, the lovely puppy 🐶at ashram. Wally had made his spot to rest and sleep near by the room I stayed in. He caught my eye the first instance I saw him.

Calm, alert and energetic; that’s Wally for me! 🙂

When I returned home, I kept thinking about him, he was a bit low on energy for those two days I saw him. When I approached him I was a bit hesitant as that was my first time making an effort to be friendly with a dog! But his loveliness was hard to be overlooked or just be appreciated from far!

As I looked at him with attention, he jumped and came forward. Sniffed me and then played for a while. It was such a liberating feeling! All those years that I have fed Parle-g or milk to dogs at street, there was sense of care and being responsible for them but the connect missed! 😌

As I met him during winter time, he was seen mostly curled up to keep him warm and low on energy until sun shone next day! But I kinda worried if he liked to play by himself and not mingle much. That brief meet got me so attached to him, I have no clear idea as to why, so much so I ended up asking ashram volunteer to tell me how he did and if they could share his pics. His little brown unique hue and white color distinctly left an impression. He seem like a delicate bundle of furry joy 😊

God! I was so happy to see him but then again He wasn’t playing! 😭

Moment I saw Sri Badrika Ashram flash on my email. I jumped to see it in spontaneity! Almost mysteriously went to the last part of the newsletter first!

New Resident at Ashram – Dogs and Puppies! My eyes looking for his name – Wally……. 🔍👀

But what do I find? As I begun to read… What? Was that my last seeing Wally?!

One by one all the siblings of Wally were being given to their new care taker! Oh no! 😞😓

And what a sweetheart Wally is, kept running back to his mother. 😭😍🤩

For some reason Sri Hari’s sweet smile kept flashing as if He is pulling Wally back. His Leela!

A bundle of furry joy; expressing relentless love for the Divine. Wally!

You may want to read the whole story from the newsletter. It will be amazing to read it.

It was so sweet and surprising to read about the little one I was occasionally and stupidly wondering about?

I just feel so proud of Wally’s zeal. So enthralled by it. And more so by the compassion of HH PP Swami ji 🙏💐 and ever mischievous Sri Hari whose Birthday Anniversary/ Consecration anniversary is awaited so eagerly! 😃😍🤗