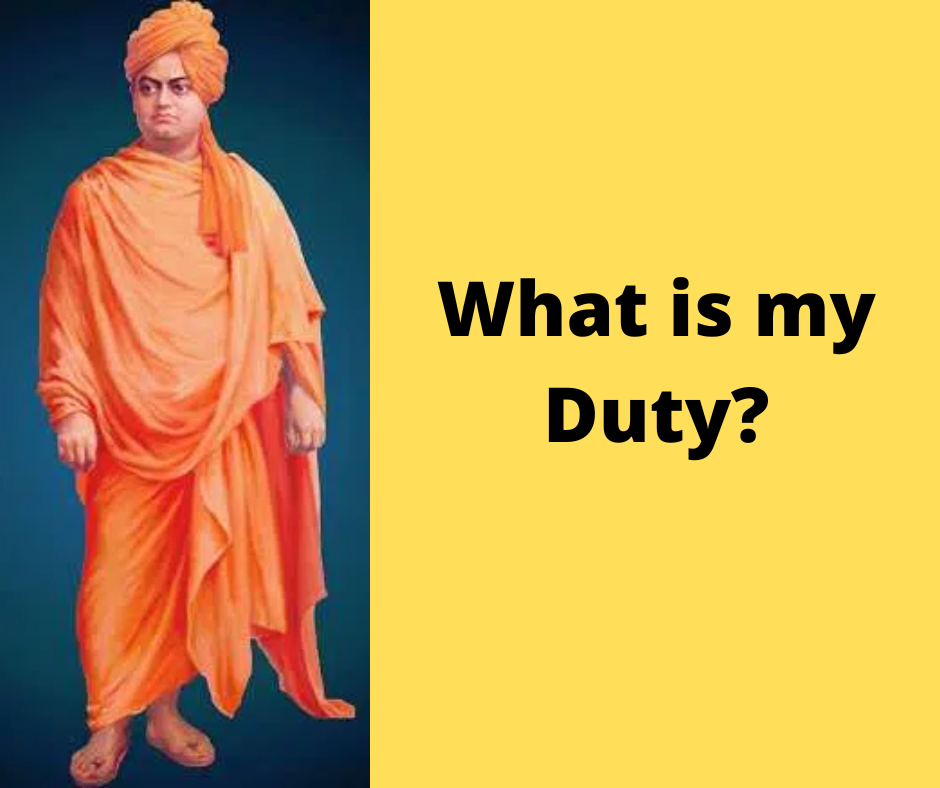 What is My Sva-Dharma or My Duty?

It is necessary in the study of Karma-Yoga to know what duty is. If I have to do something I must first know that it is my duty, and then I can do it.

The idea of duty is different in different nations. A muslim may say what is written in Koran is his duty, a Christian, in Bible and a Hindu in Vedas. There are varied ideas of duty, differing according to different states in life, different historical periods and different nations.

The term “duty“, like every other universal abstract term, is impossible to clearly define; we can only get an idea of it by knowing its practical operations and results.

The ordinary idea of duty everywhere is that every good man follows the dictates of his conscience. But what is it that makes an act a duty?

Robbers vs Soldiers – There were notorious bands of robbers in India called thugs; they thought it their duty to kill any man they could and take away his money; the larger the number of men they killed, the better they thought they were. Ordinarily if a man goes out into the street and shoots down another man, he is apt to feel sorry for it, thinking that he has done wrong. But if the very same man, as a soldier in his regiment, kills not one but twenty, he is certain to feel glad and think that he has done his duty remarkably well.

Therefore we see that it is not the thing done that defines a duty.

Yet there is duty from the subjective side. Any action that makes us go Godward is a good action, and is our duty; any action that makes us go downward is evil, and is not our duty. From the subjective standpoint we may see that certain acts have a tendency to exalt and ennoble us, while certain other acts have a tendency to degrade and to brutalise us. But it is not possible to make out with certainty which acts have which kind of tendency in relation to all persons, of all sorts and conditions.

One Universal Idea of Duty

One idea of duty which has been universally accepted by all mankind, of all ages and sects and countries which is summed up in  a Sanskrit aphorism thus:

The Bhagavad-Gita alludes to duties dependent upon birth and position in life.

The one point we ought to remember is that we should always try to see the duty of others through their own eyes, and never judge the customs of other peoples by our own standard. I am not the standard of the universe. I have to accommodate myself to the world, and not the world to me

There is, one great danger in human nature, viz that man never examines himself. He thinks he is quite as fit to be on the throne as the king.

Even if he is, he must first show that he has done the duty of his own position; and then higher duties will come to him. When we begin to work earnestly in the world, nature gives us blows right and left and soon enables us to find our position. No man can long occupy satisfactorily a position for which he is not fit. There is no use in grumbling against nature’s adjustment.

The greatest work is done only when there is no selfish motive to prompt it.

Yet it is work through the sense of duty that leads us to work without any idea of duty; when work will become worship — nay, something higher — then will work be done for its own sake.

So there is a progression –  first you work with idea of duty, then you treat work as worship, does for its own sake.

The whole organization of society has thus been developed, consciously or unconsciously, in the realms of action and experience, where, by limiting selfishness, we open the way to an unlimited expansion of the real nature of man.

Duty is seldom sweet.
It is only when love greases its wheels that it runs smoothly; it is a continuous friction otherwise.

Duty is sweet only through love, and love shines in freedom alone. Yet is it freedom to be a slave to the senses, to anger, to jealousies and a hundred other petty things that must occur every day in human life? In all these little roughness that we meet with in life, the highest expression of freedom is to forbear.

The only way to rise is by doing the duty next to us, and thus gathering strength go on until we reach the highest state.

Here is a story from Mahabharat, which explains Sva Dharma or our duty

A young Sannyâsin went to a forest; there he meditated, worshiped, and practiced Yoga for a long time. After years of hard work and practice, he was one day sitting under a tree, when some dry leaves fell upon his head. He looked up and saw a crow and a crane fighting on the top of the tree, which made him very angry. He said, “What! Dare you throw these dry leaves upon my head!” As with these words he angrily glanced at them, a flash of fire went out of his head — such was the Yogi’s power — and burnt the birds to ashes. He was very glad, almost overjoyed at this development of power — he could burn the crow and the crane by a look.

After a time he had to go to the town to beg for his bread. He went, stood at a door, and said, “Mother, give me food.” A voice came from inside the house, “Wait a little, my son.” The young man thought, “You wretched woman, how dare you make me wait! You do not know my power yet.” While he was thinking thus the voice came again: “Boy, don’t be thinking too much of yourself. Here is neither crow nor crane.” He was astonished; still he had to wait.

At last the woman came, and he fell at her feet and said, “Mother, how did you know that?” She said, “My boy, I do not know your Yoga or your practices. I am a common everyday woman. I made you wait because my husband is ill, and I was nursing him. All my life I have struggled to do my duty. When I was unmarried, I did my duty to my parents; now that I am married, I do my duty to my husband; that is all the Yoga I practice. But by doing my duty I have become illumined; thus I could read your thoughts and know what you had done in the forest.If you want to know something higher than this, go to the market of such and such a town where you will find a Vyâdha (a butcher.) who will tell you something that you will be very glad to learn.” The Sannyasin thought, “Why should I go to that town and to a butcher?” But after what he had seen, his mind opened a little, so he went. When he came near the town, he found the market and there saw, at a distance, a big fat butcher cutting meat with big knives, talking and bargaining with different people.

The young man said, “Lord help me! Is this the man from whom I am going to learn? He is the incarnation of a demon, if he is anything.” In the meantime this man looked up and said, “O Swami, did that lady send you here? Take a seat until I have done my business.” The Sannyasin took his seat; the man went on with his work, and after he had finished he took his money and said to the Sannyasin, “Come sir, come to my home.”

On reaching home the Vyadha gave him a seat, saying, “Wait here,” and went into the house. He then washed his old father and mother, fed them, and did all he could to please them, after which he came to the Sannyasin and said, “Now, sir, you have come here to see me; what can I do for you?” The Sannyasin asked him a few questions about soul and about God, and the Vyadha gave him a lecture which forms a part of the Mahâbhârata, called the Vyâdha-Gitâ.

It contains one of the highest flights of the Vedanta. When the Vyadha finished his teaching, the Sannyasin felt astonished. He said, “Why are you in that body? With such knowledge as yours why are you in a Vyadha’s body, and doing such filthy, ugly work?”

“My son,” replied the Vyadha, “no duty is ugly, no duty is impure. My birth placed me in these circumstances and environments. In my boyhood I learnt the trade; I am unattached, and I try to do my duty well. I try to do my duty as a householder, and I try to do all I can to make my father and mother happy. I neither know your Yoga, nor have I become a Sannyasin, nor did I go out of the world into a forest; nevertheless, all that you have heard and seen has come to me through the unattached doing of the duty which belongs to my position.”

When you are doing any work, do not think of anything beyond. Do it as worship, as the highest worship, and devote your whole life to it for the time being. Thus, in the story, the Vyadha and the woman did their duty with cheerfulness and whole-heartedness; and the result was that they became illuminated, clearly showing that the right performance of the duties of any station in life, without attachment to results, leads us to the highest realization of the perfection of the soul.

It is the worker who is attached to results that grumbles about the nature of the duty which has fallen to his lot;
to the unattached worker  all duties are equally good, and form efficient instruments with which selfishness and sensuality may be killed, and the freedom of the soul secured

Our duties are determined by our desires to a much larger extent than we are willing to grant. Competition rouses envy, and it kills the kindliness of the heart.

To the grumbler all duties are distasteful; nothing will ever satisfy him, and his whole life is doomed to prove a failure. Let us work on, doing as we go whatever happens to be our duty, and being ever ready to put our shoulders to the wheel. Then surely shall we see the Light!

Gospel of Sri Ramakrishna
A Prayer