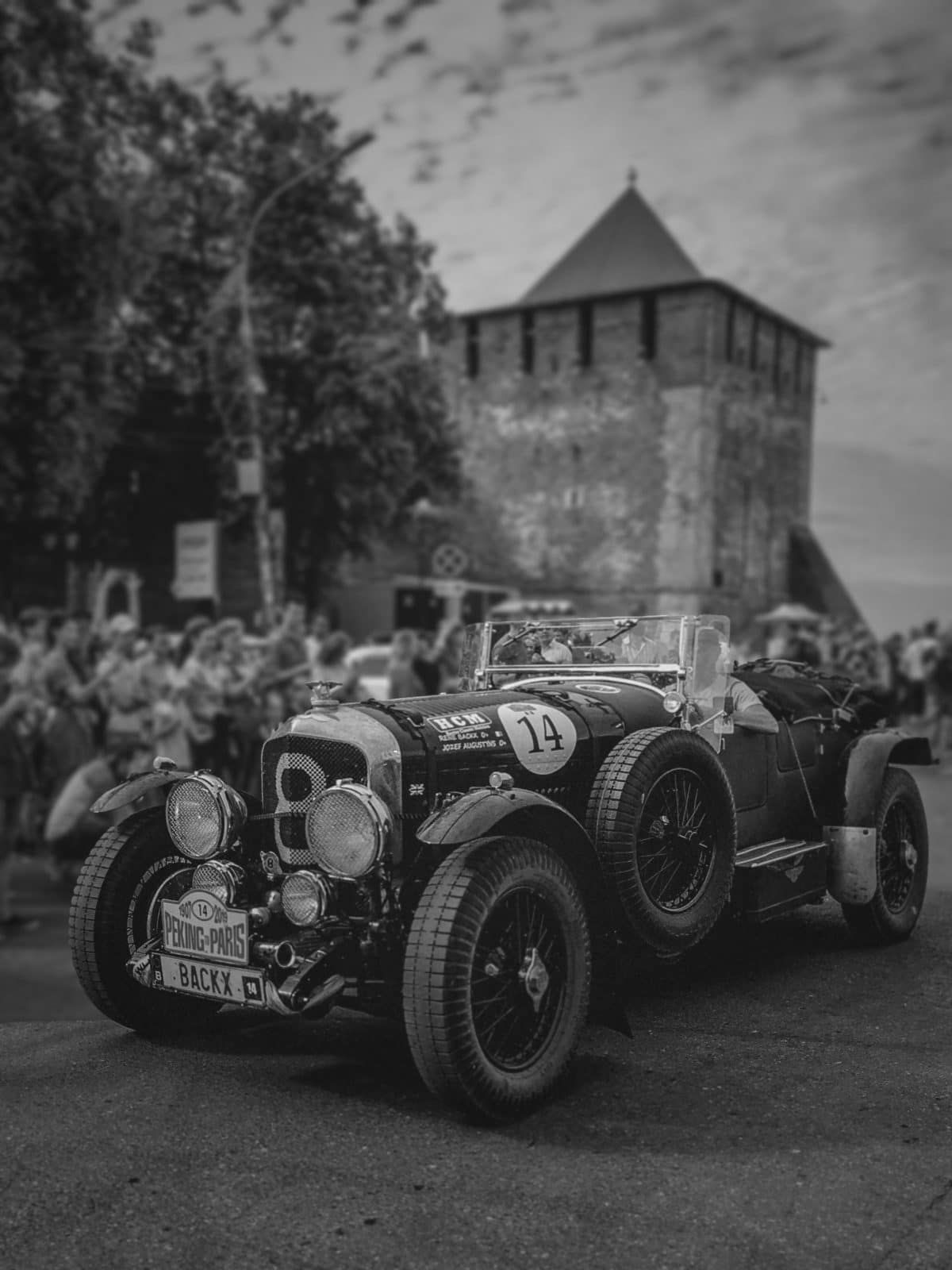 The day I learned how to drive a car is etched in my memory for all the wrong reasons. You see, I come from an illustrious family of automobile lovers, starting with my grandfather. It was only natural for my childhood clique—my brother, a cousin, and me— to aspire to drive cars rather than ride bicycles, the more appropriate form of transportation for someone my age.

I often went with my grandfather as he took his cars to the repair shop. Once asked him if that was a parking spot that he had rented for his chronically ill car. His sense of humor, which was abundant, did not extend to his cars. He prohibited me from being anywhere near his cars for two whole weeks. Cars were his jewelry. Every morning he would spend about an hour detailing his cars, cleaning them inside and out. It was a meditative experience for him. He often emerged in a great mood after spending time with his cars.

One morning, the three of us waited behind a small bush as my grandfather polished the chrome bumpers with a muslin cloth. His hands worked at a furious pace until he could see the reflection of his face on the bumper. When we spotted a satisfied smile, we approached him. I dialed the pitch of my voice a notch lower to sound older than I was and asked him if he would let us learn how to drive one of his cars. He said “Pakla” and walked away. “Pakla” was a convenient word the elders used against us. It means, “we’ll see.” It is neither a firm yes nor a firm no. It gave rise to hope, and clinging onto that hope made any elusive desire of ours that met “pakla” easier to bear.

My grandfather once boasted to me that he had bought and traded over two hundred cars. It was an incredible number. I had owned only two vintage hand-me-down diecast toy cars in my life. But I had no reason to disbelieve him. A priest from a local temple was a regular visitor to our house to cleanse old cars of their ability to inflict misfortune on its owner and to consecrate the latest iteration of humankind’s greatest invention on wheels—at least in an eight-year-old’s world view. I could remember many of those priestly visits to our garage.

My all-time favourite amongst my grandfather’s cars was the Citroen Traction Avant. It was a mean-looking behemoth painted in black, considered by thieves, bootleggers, gangsters, and other dangerous elements as their chariots. My grandfather had two of them. One was in good working order, and the other was in gradual decay, parts regularly stripped from it to fix what was broken in its luckier cousin. Although his tailored three-piece suits with a stylish chain and timepiece would have been a perfect ensemble for that car, it was not his vehicle of choice for everyday use. He grumbled about fuel consumption and its unreliable nature. It was more of a yard ornament for him. But for us, it presented a chance of a lifetime to learn driving.

My brother, cousin, and I had plenty of practice pretending to drive that monstrous metal on wheels. The Citroen served as the setting for our version of cops versus robbers. While my brother sat in the driver’s seat struggling with the steering wheel, which looked like it belonged to a giant ocean liner rather than a car, my cousin and I stood on the floorboards. With one hand clutching the door, pretending we were the gunslingers hanging off the side of the vehicle during the mock car chases, we held on for dear life. I was responsible for making noises that sounded like the engine, and my cousin made the loud musical honking sounds.

We longed for the day when we could gun the engine and get the wheels of our beloved gangster mobile moving. Many things had to fall into place. First, my grandfather’s absence from the house. This was the easy part, as his schedule was predictable. He was out of the house from ten in the morning to two in the afternoon at his medical clinic and dispensary. I don’t remember a single instance when he unexpectedly came home during those hours. My grandmother was almost always home, and her favorite haunt was the living room; the windows overlooked the driveway. Even if she did not see us, the deep thunderous hum of the Citroen’s eight-cylinder engine would give us away. We never thought to ask her if it would be appropriate for us to gain valuable driving experience by going up and down the driveway, forwards, and reverse. We assumed that the answer would be a firm no. Nobody in the house wanted to be in the crosshairs of my grandfather’s wrath.

When the opportunity came, we grabbed it. Or rather, I followed along as my brother set the plan in motion. He was the oldest in our clique, and we looked up to him for such important decisions. After all, he was the one with the most experience wrestling with the steering wheel. My brother decided that it would require the three of us to get the car moving. He was the obvious choice for the wheel, and my cousin and I fought for the rights to the gear stick or the brake/clutch/accelerator combination. I did not want my hands over the pedals, which were stomped on by my grandfather’s shoes. He frequented hospitals and made house calls to tend to his patients, and so did his shoes. I traded one of my two toy cars for the right to handle the gear stick.

The keys were well hidden. We had spent several days on recce and knew where they were. My grandfather had an ornate cupboard built into the wall in which he stored his clothes and belongings. Tucked towards the back in a small lockbox were the keys. The closet itself was locked, and its key was hidden on a small ledge on top of the cupboard.

It took us just over sixty seconds to retrieve the keys of the Citroen on a day when only the cook was at home. He was taking his usual late morning slumber after feeding the clan at the ten am brunch. Every minute counted. We wanted to get as many runs as possible between the garage door and the main gate. The driveway was a long narrow strip of concrete between the house on one side and a strip of dirt filled with shrubs. There was little room for error, and I was glad I was not behind the wheel. My task was simple, moving the gear stick from the first gear through neutral into the second. My brother said that we would not need to go up to a higher gear.

Three seconds to accelerate and three to brake, he estimated as he sized up the driveway from one end to another. We opened the garage door. Luckily the car was facing the right way. We would not have to reverse out of the garage. The three of us climbed into the Citroen. My brother sat cross-legged on the driver’s seat. His legs were not long enough to reach the pedals, which were manned by my cousin, while I crouched by the gear stick, ready to pull and push as my brother yelled out gear one or two. Every time we rode with our grandfather, we observed the sequence of events on how he got the car to start–push the clutch, bring the gear to neutral and turn the ignition key while feathering the accelerator pedal.

The engine sputtered and died several times before we heard a healthy roar that made the car vibrate and our hearts pound with excitement. As my cousin leaned his thin body against the clutch pedal, I pushed on the gear stick to lock in the first gear. With his free hand, my cousin squeezed the accelerator as he eased off the clutch. Barely a second later, my brother yelled out, “brake.” The squeal of the brakes continued as the car came to a stop and lurched forward. I manoeuvred the gear into reverse, which was a complicated affair. After a short prayer to the car gods, we put the car into motion, in reverse. The vehicle lunged backwards as if it was trying to grasp a lifeline, and the engine stalled. Each time, we moved a few inches. When we got the car into the garage, we were exhausted from the effort. Once was enough, up and down the driveway, we had gotten away with no scratches or bruises to the car’s shiny exterior.

We stood by the large wrought iron gate, hoping to distract my grandfather when he returned from work, afraid we had left evidence of our mischief behind. He stopped his car on the driveway well short of his usual parking spot. Something had caught his eye. He knelt and ran his fingers on tire marks made by the Citroen. He walked over to the garage and was relieved to see his precious car intact. He left without a word, returning with his mechanic, who hoisted the Citroen on four car jacks and removed all four wheels. Cars were now out of our reach, and we returned to dreaming about one day owning a bicycle.

Am I Self Sabotaging??
Vaikuntha Dham