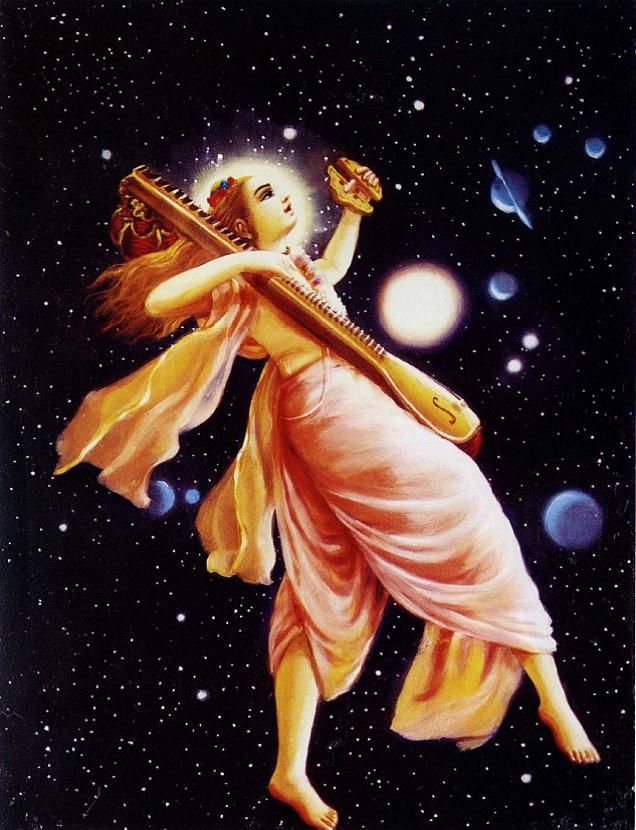 Narada and the prequel to Ramayana

The image of Narada -with his khartal and veena chanting “Narayan , Narayan” has been carved in the mind of Indians by Ramanand Sagar’s serial Ramayana . Even if you haven’t watched this highest TRP grossing series of all times – you would have heard stories of Narada being proud of being the foremost bhakta  of Sri Hari .

Why did this Bhakta – whose every breath was the Lord’s holy name , curse his  own lord then ? And what happened thereafter ? The first story in the post covers the story of Narada’s curse and the lord coming to earth as Sri Ram. The second story(next post) looks at Narada getting lost in Sri hari’s leela

Once Narada was blessed by Lord Mahadeva to do undisturbed penance in the sacred Tapovan . (Tapovan available in Sadhna app as well ) When Narada was lost in his meditation on the Lord – Indra as usual got insecure about his throne and authority – and sent his friends Agni (Fire) Vayu (Air ) and Varuna ( Water) to disrupt Narada’s tapas . Gale storms soon rocked Tapovana with howling winds uprooting trees like twigs . Varuna and Indra further wrought torrential rain to leave no stone unturned . However ,Narada continued to meditate without getting distracted . Finally ,  when they were frustrated ,they asked Agni to devour the forest with his insatiable flames . The heat and fire too could not move Narada . Indra then sent Kamadeva – the God of Love / lust along with the finest apasaras to distract the muni . The forest was now filled with flowers and fragrance and mating calls of birds .With  mesmerizing celestial music , the apsaras danced sensuously trying to win over Narada’s attention. But Narada stayed unmoved . Finally , Kamadeva and Indra gave up their efforts.

When Narada’s meditation was complete – he went to Kailash and paid his obeisance to Mahadeva . Narada being Narada couldn’t help boasting about the fact that he had defeated Vayu Agni Varuna and even Kamadeva himself . Lord Shiva smiled sensing that Narada was full of pride and couldn’t see that it was Shiva’s blessing that had enabled him to continue praying peacefully  and cautioned him – “You did well , O Narada , but please don’t tell any of this to Vishnu” . Narada threw him a puzzled look before departing for Vaikuntha where before his beloved Prabhu he once again boasted about defeating Kamadeva and other devas .  Sri Hari decided to teach Narada humility and rid him of his self conceit .

As Narada was going back , he crossed King Sheelnidhi’s palace . The King welcomed him warmly and informed him that he was organizing a Swyamvara for his beautiful daughter Srimati and then requested Narada to see his daughter’s palm and reveal her future .Kamadeva entered Narada’s heart . As Narada saw the Princess he fell head over heels in love with her . As he held her palm in his hands , he was totally bewitched by Kama’s control and just managed to mumble that the Princess would marry a very handsome and talented suitor  who would be the ruler of the three worlds.

Narada flew right back to Vaikuntha and prayed to Sri Vishnu to transform  him into his most endearing and handsome form of Hari and adorn him with  fine silks and jewels . Narada wanted to be as desirable and as irresistible as possible . Bhagwaan reminded Narada – “But you just conquered desire and Kamadeva ,you said”. “No doubt about that , responded Narada, but now I am in love with the princess and want to marry her so please make me radiant and give me the most distinctive appearance .

“ So be it ! said Sri Hari and gave Narada his golden crown , dazzling invaluable jewels and finest silks  but also the face of a monkey .(** Hari can refer to tawny colored animals including lions and monkeys )

Unaware of the same and believing himself to be   Mr Universe (of his times) and absolutely invincible , Narada arrived at the majestic assembly of the  Swyamvara . The Princess appeared with a garland and went from one suitor to the next , evaluating each one silently . When she reached Narada – she broke into a hearty laugh .”

“Why is she laughing  ?”thought  Narada . And as she moved on , he tried taking the next position again to get her attention. The Princess, however kept laughing – she walked to the end of the line and stood for a moment silently as she found no worthy suitor .In that instant Bhagwaan appeared disguised as a king but the princess recognized him and  instantly put the garland around his neck.

Rebuffed and jealous Narada couldn’t believe he had been over looked .  The pain of rejection seared his heart .Jaya and Vijaya – companions of Bhagwaan then tried consoling him , mumbling under their breath about his unique appearance . When Narada saw other kings and princes laugh at him –  he decided to figure out the secret himself and looked into the mirror . He found a well adorned monkey staring back .

Filled with rage and anger – he walked up to Sri Hari and accused him of perfidy and of being crafty,scheming and evil. Burning inside – he cursed Sri Hari that – just as a passionate desire for the beautiful princess was created in his heart and then she was taken away – Sri Hari too will suffer the same fate of being separated from his  beloved wife . Having some mercy Narada  added that only monkeys will be able to help him win back his wife .

Sri Hari absorbed the curse and the bitter words with a smile . As the veil of maya lifted from Narada’s consciousness , he  regained his devotional sentiment – and on realizing what had happened felt really contrite .

He fell at the feet of Vishnu and apologized for his acts . The ever compassionate Bhagwaan lovingly lifted him up and told him it was an act of maya from Bholenaath– to rid of him of his conceit and pride and give him the karma phala . Finally , Sri Hari revealed  that he would be born as Sri Rama in Treta Yuga and would face the suffering of losing his beloved and win her back with the Vanar Sena as predicted by Narada .

Stay tuned for the next post where Narada falls in love again in another endearing leela . Jai Sri Hari !