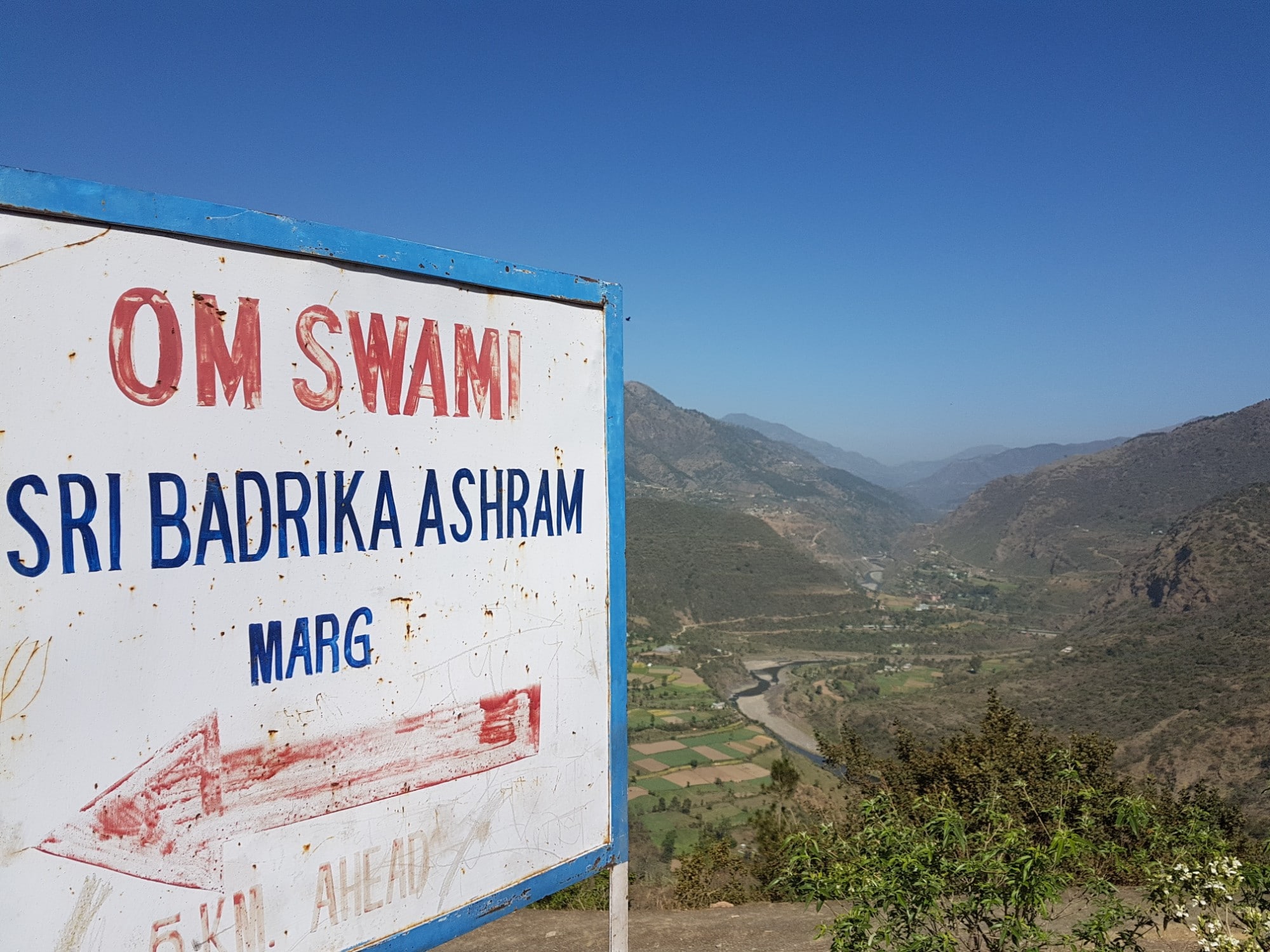 When He Calls: Part 2

Arriving at the ashram!

This is Part 2 in a series.

Faces adorned with palpable eagerness & hearts flowing with a strange curiosity, we set out to see the Guru living at foothills of Himalayas, where one can find their way only with His blessings and grace🙏🏻. And so we began our journey to Kasauli on 31st March, 2017, us having decided to stick with the plans of overnight stay because we had already booked our vehicles (Haridwar to Kasauli, Kasauli to the ashram.) for the same. Reaching there around noon, we spent some quiet time at hotel , engrossed in thoughts, wondering about the ashram and papa’s health.🤔 Kasauli is one the most beautiful towns in Himachal Pradesh. It also has a Cantonment area adding to its beauty. Alok being an ex Army officer ( He is an AFMCite who retired from the Army as a Major) has a natural pull towards anything and everything related to the Army, so we decided to  take a stroll in Cant area. It was an absolutely scenic area, overlooking the valley and lush green surroundings, the familiar Army quarters, in all their glory.  It  immediately lifted our moods and it set the tone for an exciting day ahead. 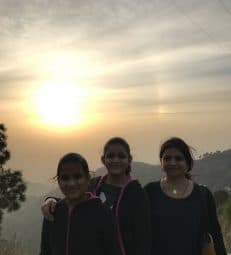 An evening stroll amongst the whispering pines at Kasauli.

The next morning, on 1st April, it was Bhavita’s birthday.🤡🎂 She cavorted about wearing new clothes and we were in our high spirits of celebration, wanted to reach Ashram as early as possible, so we got the breakfast packed to have a quick bite on the way.🤗

Birthday girl ready to leave for the Ashram.

Alok had already spoken to Sanju regarding how to reach the ashram- Sanju, whose name is available on Swamiji’s website for Ashram bookings. He is one of the most soft-spoken, helpful and kind persons we know. I wonder what good karma he did to meet Swamiji right at the beginning, even before the beginning of the Ashram construction. He once told us the story of how he met Swamiji and he was totally overwhelmed by even just recounting it.

He had once been sitting at home when his brother burst in exclaiming, “Bhaiya! I just saw a Swamiji, he is so radiant, just like the Buddha. It almost feels like the Buddha is sitting there!” He had hurried to the place to find Swamiji sitting at the Ashram site under the shade of umbrella, His divine self giving off rays of beauty and bliss, causing him to be awestruck. One can simply not help but be mesmerised by His form. It’s one of the most beautiful things the human eye can observe, isn’t it?🌺🌸

Sanju has taken Swamiji to & fro from the Ashram many times. Alok sometimes even envies him and wonders what it would be like had he been at Sanju’s place. Could he not fit into Sanju’s shoes? What  a bliss would it be, to travel with Swamiji in a car! The mere thought puts a wide smile on Alok’s face. 🙃😊 At home, Alok is the man of our family, but in Swamiji’s presence , he is no more than a happy child. His grin says  it all.😁

However, Sanju was busy, and so he sent along Vikas, a young and enthusiastic driver who highlighted our journey with beautiful tales about Swamiji.

Although Alok & I had read As We Know Him twice and we had almost memorised all those beautiful mentions of His  playfulness and grace, listening to His Divine Leela can never be enough- it is an insatiable quest, a thirst only His sweet self can quench. The more one hears about Him, one yearns for more, and we were no different. Our ears ached to hear more about Him from Vikas and he was only happy to oblige, being rather talkative, but like a little child. Well, after all, we are all His children, aren’t we?💛

Amongst the many things he told, we particularly remember one of them- the folklore of Giriganga, a popular tale amongst the villagers. Hemanya was so happy to hear it, her creative juices grasped it  and she later wrote a poem about the same, which she’s also published here. The memory regarding the poem and Swamiji, remains her most cherished treasure till date. More about it later…..😊

We were already joyful after listening to the story of Giriganga, and it only further thrilled us to know that Vikas had one day accompanied Swamiji, and had a hard time keeping up with His incredibly fast walk. Whoever has witnessed this first hand knows how out of breath most of his disciples are as He paces into the temple. They all almost have to run. 😁

We had decided to go to the Ashram via Solan, as we thought it would be appropriate to take along some fruits and sweets as Prasadam before we visit the temple. Look at our naive attitude at the time- we also bought some finest mangoes to offer it to Swamiji as we had read in “As we know Him’ how as a child Swamiji was fond of mangoes and sweets. 😊 We thought He would still be eating it fondly only to find out later that He doesn’t accept any material offerings.

It was about a three-hour journey but it felt as if it passed in no time at all, though we kept Vikas constantly  asking “Bhaiya, aur kitni der?” How much more time? We weren’t impatient, but definitely very enthusiastic to step onto those pure, beautiful lands of His.

When Vikas declared that the turn to the Ashram was only about ten minutes away, we took a quick halt for ten minutes and had a quick breakfast, which turned out to be a beautiful experience for the kids, as they munched upon their food, standing amongst tall and gracious Pine and Sal trees, later picking up a few pine cones as souvenirs (which still grace our garden).

Within a few minutes, Vikas announced that the ashram’s turn was right there. We all sighed deeply in relief. “Finally!” We could hear a mumble from the backseat, followed by a slightly disappointed grunt to know that we still had 12 kilometres to go!🙄😯

The ashram is at the end of a twelve kilometre Kaccha or unpaved  road, which cannot be seen in cities. It can barely accommodate two cars at a very few specific turns, so if you’re the only car on the road and you see another car heading your way, only Sri Hari can save you.🤭 Just kidding- the drivers there practically fly the cars along, being absolute experts in finding space on the narrowest of roads. Although we have  heard plenty of stories of cars being stuck on cliffs and later rescued by Sanju and his team, we were strangely calm and serene, for we knew we were heading to His abode in His own lap, and there could be no possible mishaps in our way. So, instead of freaking out, like we would have done had we travelled such a road otherwise, we simply enjoyed the enchanting views of the lush greenery, deep valley, crop blanketed fields and the kids excitedly pointed out the step farms that they’d only learnt about in their textbooks. Even though our hearts ached for a view of His lands, one had to wait, for it is visible only half a kilometre before actually reaching the ashram, and all one can do till then is wait.

Our patience had just about reached its pinnacle when an announcement from Vikas caught us off guard. “We’re here!”

And so, were soothed our eyes and souls, for the very first time in a manner like never before, as we stole a look at His divine abode. It was a sublime experience, unlike no other.

We had come a long way- literally & metaphorically .Papa undergoing angioplasty on 28th to reaching Ashram on 1 st April, our faith was renewed as we moved from uncertainty to security, from just curious inquisitive souls to devotees. And so, we were home.

Little did we know, just a  few minutes into the Ashram, we would be granted His divine Darshan. He had called us home, after all. And, He was waiting for us. 😌🙏  (I guess we like to think so.)

I am deeply grateful to each one of you who spent your precious time reading this post,encouraging me in the sweetest possible words.

Immensely grateful to  Alok[ my dear husband and spiritual partner]  whose vivid memory made  writing this post  possible and Hemanya, the blessing of my life, who edited it beautifully and showed tremendous patience with her not-so-tech savvy mom. 🤗

Alright then! Until next time…

Doctor by profession, seeker by nature,forever on the journey of self purification.

95 comments on this post. Please login to view member comments and participate in the discussion.


Login with Email
No Account? Create One
The Arrogant Sweeper
My Mom’s Fear of Sleeping Alone…