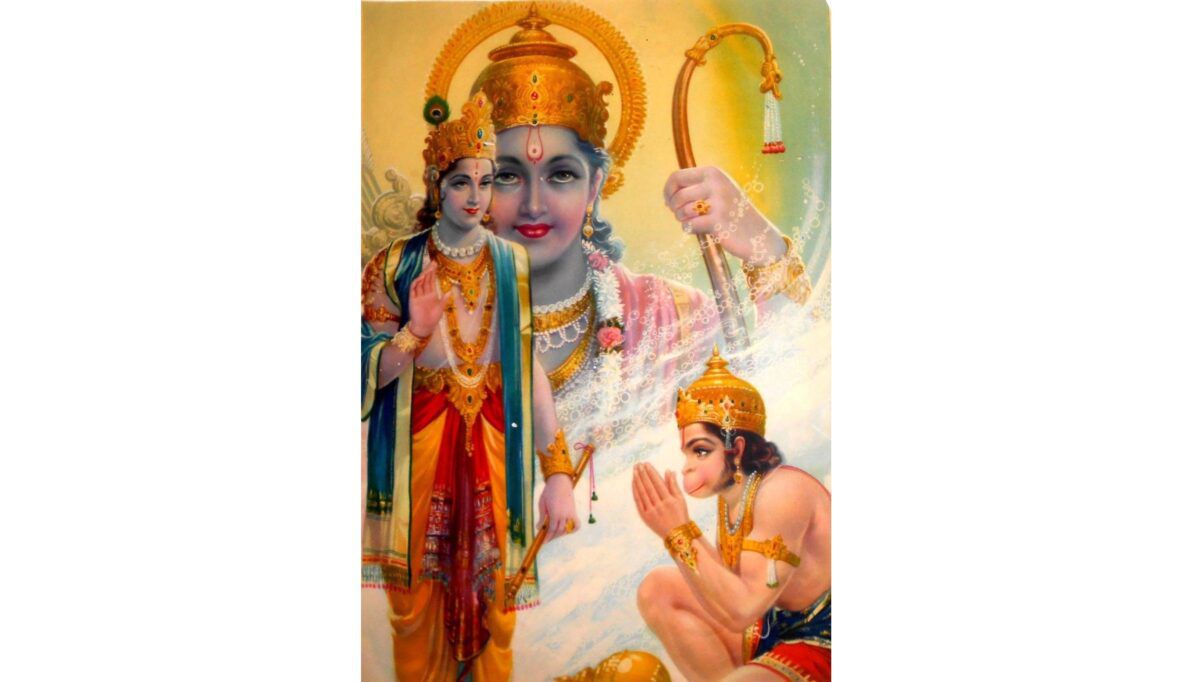 Here's how and why the two legends from different epics met.

The great Indian epics Ramayana and Mahabharata happened in different yugas (eras) and are separated by at least a thousand years. Yet, there are a few crossover incidents between the two epics. The one about Bheem from Mahabharata meeting Lord Hanuman from Ramayana was covered in this blog some time back, which you can read HERE.

Similarly, there’s another meeting between two personalities from the two different epics that is interesting and moving. This one is between Lord Krishna and Hanuman.

Ramayana happened in Treta Yuga. But Hanuman remained on earth because of him being immortal. Hence, he was present in the following Yuga as well. Called Dwapar Yuga, this is the era where Mahabharata took place.

Hanuman is the ideal and the best devotee of Lord Rama. Lord Vishnu had taken birth as lord Rama in the Treta Yuga to finish off the evil Ravana, who had also kidnapped His wife Sita. After Rama defeated Ravana, with the help of Hanuman and the vaanar sena (army of animals), He left the earth as his task was completed.

In the following yuga (Dwapar Yuga), Vishnu again arrived on earth, this time as Krishna. His aim was to finish off his evil uncle Kans and other demons, as a child, and later help the Pandavas defeat the evil Kauravas in the Mahabharata war in Kurukshetra. Just before the start of the war, Krishna’s biggest aim was to speak out the holy Bhagavad Gita to Arjuna. The book continues to remain sacred.

It was during this Yuga before the Mahabharata war that Narada Muni spotted Hanuman meditating on the name of his beloved Lord Rama on Gandhamadan mountain in order to get his darshan. Narada is touched by Hanuman’s love and respect for Rama. He asks Hanuman why he is not willing to visit Krishna in Dwarka since he is also the incarnation of the same God – Vishnu.

Hanuman politely refuses as he feels if he visits his Lord uninvited, it might not look good. Further moved by Hanuman’s devotion and respect towards his lord, Narada quickly visits Krishna in Dwarka, where he stayed with his wife Rukmini, and urges him to meet his ardent devotee from his previous birth.

Narada doubts if Hanuman will recognize Krishna as his Lord from the earlier Yuga as he believes he himself is His biggest devotee. But Krishna is sure that Hanuman will recognize him even if they impersonate someone else. Coincidentally, the next day was Ram Navami (the birthday of Lord Ram as per the Hindu calendar).

On this day every year, Hanuman, while impersonating a worldly man, organizes a feast for Rama’s devotees and priests in Ayodhya. Hence, Krishna and Narada decide to impersonate ordinary priests to gather for the Ram Navami feast. They sit with the rest of the devotees while Hanuman serves each one of them with love.

Just then, Hanuman stops serving when he notices one among the many priests. Hanuman instantly notices his lord through His lotus feet. Krishna is proven right, while Narada humbly accepts defeat. Krishna reveals that the purpose of this visit was also to politely teach a lesson to Narada since the latter had started to show some arrogance by proclaiming himself as the greatest devotee of Krishna.

Meanwhile, Hanuman gets overwhelmed and emotional to see his Lord after ages, as expected. This remains one of the most moving incidents from Indian mythology.

But there is more to it as Hanuman again gets a chance to serve his Lord in another mission. More about it in the following post.

Keyur Seta is a senior film journalist working with Bollywood Hungama. He writes on spirituality on his blog 'Road to Divinity' for personal satisfaction and hobby. His topics are mostly about but not limited to Swami Vivekananda, Mahabharata, Bhagavad Gita and Ramayana. For him, being spiritual doesn't not mean putting a religious label on himself. Hence, he believes in visiting the places of worship of all faiths. He hopes to inspire people to lead a more peaceful life through his writings.