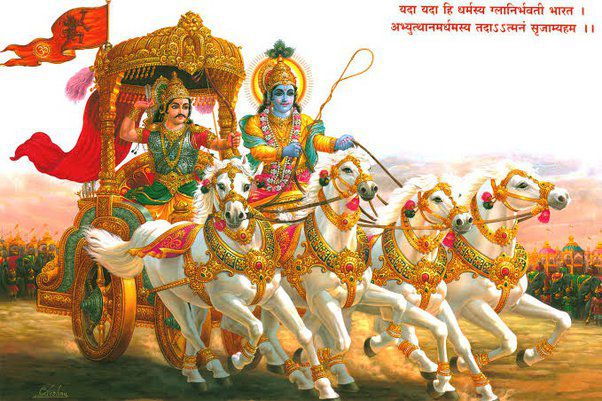 A crossover between Ramayana and Mahabharata

Ramayana and Mahabharata appear as two different epics but they are interconnected. Apart from the key players’ Lord Rama and Lord Krishna who appeared in both the epics as avatars of Lord Vishnu, there are few other interconnected incidents in both the scriptures.

The most prominent instance of all is the meeting of Hanuman and Bheem. When Bheem, along with Yudhisthir, Arjun, Nakula, Sahadeva, Draupadi and Kunti, is in exile for 14 years, he comes across a monkey in the forest. He humbly asks the monkey to lift his tail from his way, so that he can pass ahead.

The monkey asks Bheem himself to lift his tail and keep it aside. But Bheem, despite being one of the strongest creatures, is unable to lift a mere tail. He realizes that this is no ordinary monkey and offers his respect to the creature.

This is when the monkey reveals that he is none other than Hanuman and takes his actual form.

Both of them were moved by their sudden meet, which was nothing short of iconic. In today’s cinema language, this was a crossover between Ramayana and Mahabharata.

During the meet, Hanuman also promised to protect the Pandavas in their future war against the Kauravas that would take place in Kurukshetra. Hence, Hanuman’s image can be found on the flag fluttering over Arjuna’s chariot. In some versions, Hanuman himself is seen seated on the top of the chariot near the flag.

Interestingly, the chariot that Hanuman was protecting was being driven by Lord Krishna. In the previous Treta Yuga, Hanuman was the biggest devotee and follower of Rama, who incarnated as Krishna in the next Dwapar Yuga in which Mahabharata took place.

चॉकलेटी चॉकलेट केक 😋😋
Listen to Heart or Succumb to Conditioning?