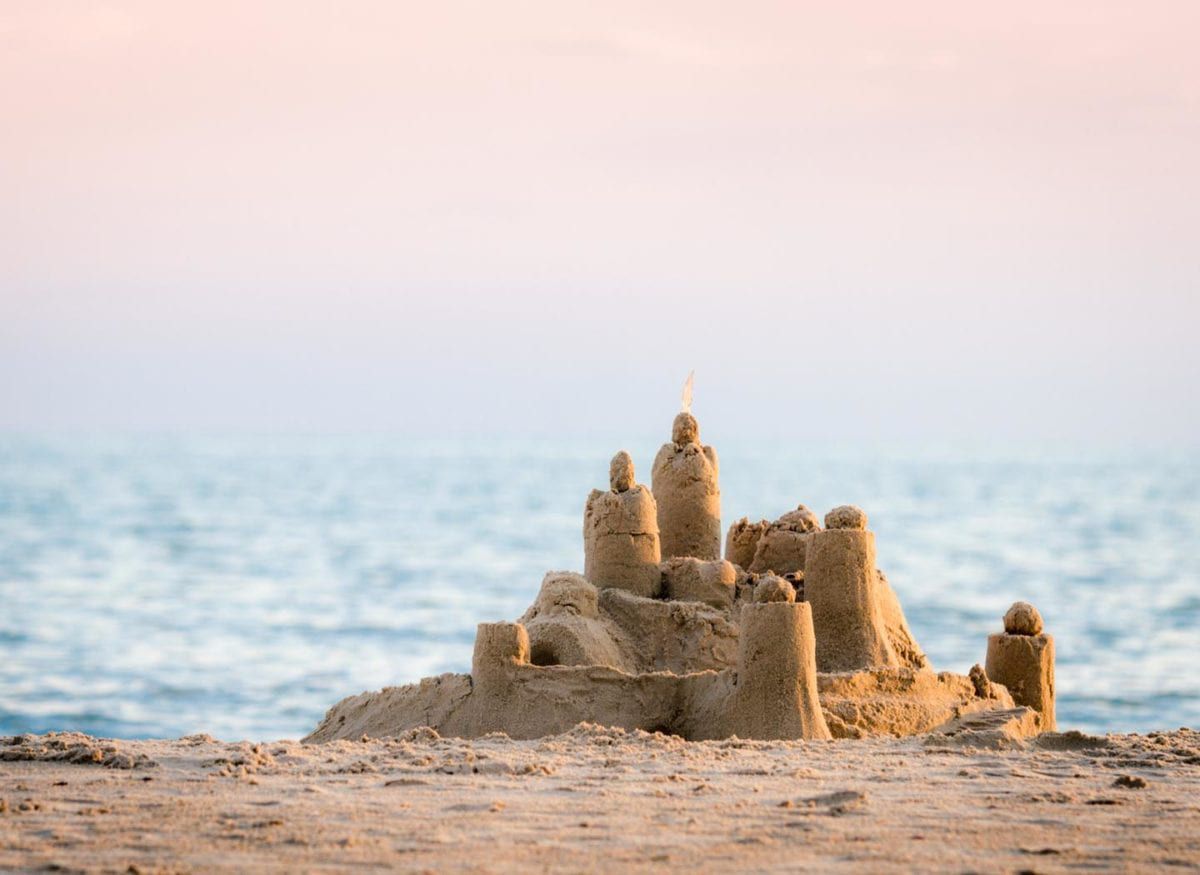 No matter how beautiful the sandcastle, it's temporary. Waves will wash it away. What are you holding on to?

Before I get to talking about angry people, let me share with you a story.

Once upon a time, some kids were playing on a beach. They were busy making castles and other structures in the sand. Some were better equipped than others. They had shovels, buckets, mugs, and other tools. They spent several hours building their castles.

One of them was not interested in erecting structures, he was simply observing them. Later in the afternoon, as the others moved towards completing their castles, he could not resist the temptation to stomp on them, to flatten the whole lot with one mighty kick. And kick he did blasting the castles.

The other kids got together and gave him a thrashing, they punched him, hit him with the plastic spade, and threw sand at him. It left bruises on his body and a scar on his face. He went away and started crying. The other kids were too angry to empathize, they resumed building their castles. Barely had another hour passed when it began to get dark. People were starting to return home. The kids decided to call it quits for the day.

Before leaving, they gleefully trampled on each other’s castles. After doing so for a few minutes, after reducing to sand their whole day’s worth of labor, they went home.

The lonely, beaten-up kid sat at a distance thinking, was it his action that was wrong or the timing, or did he get beaten because he had no right to destroy what he had not built? How come the same action he performed triggered anger in others whereas it brought joy when they did it themselves? he thought.

Let us not judge anyone’s actions in the above story for a moment. Let us simply reflect on the meaning of the story. No matter what you are defending, it is no more permanent than a sandcastle. While discipline may be necessary, anger can only ever be supported by an excuse. You may justify it somehow, but the truth is, it hurts both the doer and the recipient.

As I indicated in my previous post, let me help you understand different types of angry people.

They mainly fall into three categories, as follows:

Think of engraving a line in rock using a chisel. It will stay there forever. Anger in some is like that line in the rock. Circumstances, occurrences, and incidents in their life and their own outlook towards such situations leave them angry. They are not able to forget what they went through, and they are unable to forgive the ones who wronged them, as a result, they hold anger and negativity in their hearts.

Like a sculpted feature, anger leaves a permanent mark on their minds. These ones are the hardest to heal. Think of the stone, irreversible damage has been done to it. There is no way of going back and restoring the stone to its original state. This is anger of the worst type.

Those who let negativity brew in their hearts and allow it to boil over too are comparable to sculptors of stone. They remain mostly pessimistic and negative, flustered, and cross. For every adverse situation, for every negative emotion, anger is their only response. With each episode, their resentment only grows, and the lines of anger become deeper, thicker, more ingrained.

Angry ones of this type are more common in our world. Envisage drawing a line in the sand, no matter how deep or how thick, it is not permanent. Irrespective of how firm the wall of a sandcastle is, one wave and it is washed ashore. Similarly, there are many who get angry but they do not keep anger in their hearts, they let it go.

While frenzied, they may build castles of thoughts, of decisions, but one wave of bliss, a tide of good times, an act of apology, a show of remorse from the offender, and they immediately bring down their walls and go back to their usual, happy self. The wise ones keep their kind hearts pure enough to not become sculptors of stone, they may get angry but they let it go. Ultimately, it causes no damage to the sand, the lines are wiped away, and the structures are demolished in no time.

The wisest type, this! If you observe a surfer, you will find they too draw lines, they do it on water though. The lines disappear as soon as they are drawn. A surfer’s anger is momentary, it rises swiftly and goes down just as rapidly. They cool down before they say any words of grief and hurt, they do not keep anger in their heart, they do not build any structures, however temporary, they simply ride the wave and let go.

The act of turning inward turns one into more of a pond though, a reservoir of clear water, still and calm.

In order to overcome your anger, understand your own nature, whether you are the sculptor or the surfer, and ascertain the nature of your anger, that is, whether it is a volcano or a brewer. Thereafter, take steps towards becoming stronger than your own anger, because, if you are stronger, you will overcome anger, otherwise, it will overpower you.

I have covered the essence of the emotion of anger, in my next post, I will document the actual steps to overcome it. Till then, do spend a few minutes contemplating your own nature and that of your anger. The more you know yourself, the better you become at whatever you want to be.

Two Types of Anger
How to Overcome Anger