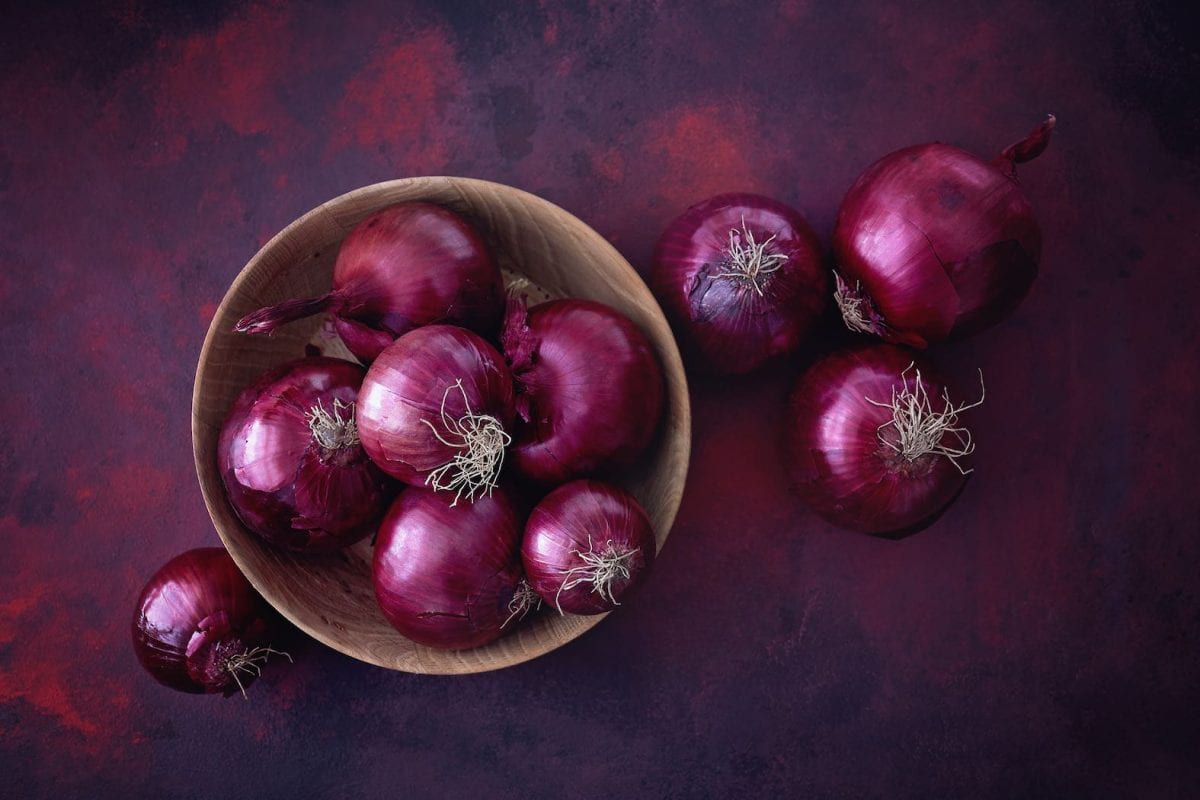 Have you noticed how we have the least tolerance for certain things and people in life? The moment we have to face those episodes or people, most of us simply fly off the handle. We may regret it later on, but deep inside we tend to believe that, “I got angry because they set me off, they triggered it. That, had they had their house in order I wouldn’t be angry to begin with.” I suppose it’s so convenient but this is a poisonous view. Poisonous because now we have shifted the responsibility of our behavior onto someone else. The truth is, whatever be the case, we always have a choice.

“O bhikkus,” Buddha used to say, “a monk should not give way to anger even though he be sawn limb from limb with a two-handed saw.”  1 I may as well share the story Buddha narrated to one of his disciples, Moliya Phagguna, when he said the words above.

Moliya Phagguna, otherwise an erudite scholar and obedient monk, had certain personality traits that weren’t conducive to the monastic life. Let’s just say he was popular with the ladies and whenever he was confronted, he would lash out. Finally, the matter was brought to Buddha who gave instructions on self-training and virtuous conduct, starting with the story below, quoted from Religions in the World by Chris Wright:

In the town of Savatthi there was a housewife called Videhika. She was reputed to be gentle, humble, and calm. She had a servant, called Kali, who was industrious and efficient. One day Kali thought: “Although my mistress is reputed to be gentle, humble, and calm, I suspect that she has a temper. She does not show it because I do my work so well. What if I were to test my mistress?”

(Although I disapprove of the violent actions of Videhika, I empathize with her. What was Kali thinking! Besides, it’s not easy to work with lazy people, I tell you. Buddha, however, just as awakened beings in other religions had, too, set the highest ideal for his disciples.)

He goes on to expound the five aspects of speech by which others may address us. Such speech can be timely or untimely, true or false, affectionate or harsh, beneficial or unbeneficial, with a mind of good-will or with inner hate. Either way, he says, a true seeker should train him/herself to not use evil words or harbor any resentment.  3

Think of anger as an onion for a moment. The outermost layer is anger (krodha). Next is frustration (kuntha) and inconvenience (kashta). Beneath the second layer you’ll find hurt (aghata). After hurt is expectation (asha). Peel off expectation and you’ll discover a sense of entitlement (adhikara). Just after entitlement is the layer of attachment (anuraga). Go further and you’ll find ignorance (agyanta). This onion, nurtured in the manure of wrong ideas (avidya) and tilled by self-centeredness (svartha), grows in the soil of ego (ahamkara).

As long as even one layer of this onion is present, it’s enough to fill the room with a strong smell and make you cry. You can chop, slice, or dice it, the smell remains. Either, cook it in love, forgiveness and patience, and it gets better, edible, even tastier. Or, get rid of it all together. For, in its raw form the onion of anger remains pungent and lachrymal.

In a way, these layers represent the various stages of anger. We may snap at someone impromptu. But beneath that reaction, the emotion of anger has progressed through several stages. Like a nuclear explosion, it can happen in a fraction of a moment. Since drawing is not my forte, I’ve put together this pyramid for you to depict what I mean. I chose a pyramid because an onion is not as romantic… Just kidding. Here: 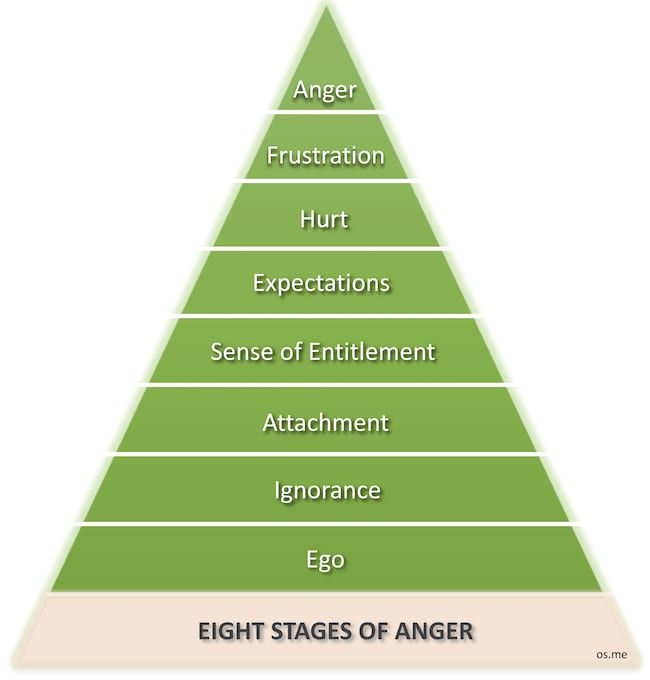 Living in the material world, can anger ever be right? Possibly. Justified? Maybe. After all, we are adept at justifying everything we think, feel and do. Can anger be useful? Perhaps. The only thing to keep in mind is that anger is a costly emotion. It’s the most expensive social emotion. Anger is a response, the consequences of which will come back to bite you repeatedly, causing more anger in return.

Mulla Nasrudin was of marriageable age and his parents were looking for a suitable alliance for him.

“I want a wife like the moon,” Mulla said. “She should come at night and leave in the morning.”

The anger of the wise ones is like the moon; it wanes quickly. When anger is not an expression but an emotion, it’s more akin to a garbage dump. That is, if not cleaned, it only rots and gets worse with time.

The next time you find yourself worked up, just bear in mind, one episode can undo years of hard-earned spiritual attainment. If you have to be firm, should you need to put on a display of anger to get the job done in the real world, you can do so without using hurtful words. I concede that an exhibition of anger is needed at times to keep the ball rolling. But, if in doing so, you actually experience anger, it means it’s no longer just for show, but a jab in your heart. Well then, some introspection, a bit of change and mindful actions are required; for your own benefit and for those around you.

Half the things we lose sleep over, most of what we lose our peace over, they are rarely ever worth it. Life can do without them. Keeping anger inside has never solved anyone’s problems or made them any happier. A bit of onion can bring some crunch and zest, it can accentuate the taste of your curry, but you can’t just eat the whole thing on its own. The energy in anger is something like that.

Cook this onion or get rid of it. Peel its layers and in the end there’s nothing. Much ado about nothing: that’s anger in a nutshell.

While the eight stages of anger stated above afflict all of us, the good news is that it is possible to remove these stages from our consciousness!

The questions below expand on the concept of anger and how it can be rooted out from our system forever.

How do I keep my anger in check around difficult people?

Since it’s a given that at all stages in your life, you’ll meet people who may hurt you, disagree with you or dislike you, what can you do to retain your sanity, you wonder. For a brief moment, when things don’t happen according to us, when people don’t behave how we wish them to, everyone experiences a brief surge of anger. It’s swift like lightning. 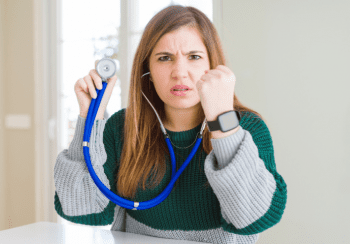 This surge of anger stems from feelings of annoyance, often deep rooted. All feelings have a seed which means you can go to the source and remove them forever. And there are five ways of removing this annoyance which you can read about here.

What must I do to permanently remove the emotion of anger from my life?

The more attached you are, the greater the anger. With attachment, it is difficult to overcome anger. The extent of hurt you experience is directly proportional to the degree of attachment you have. 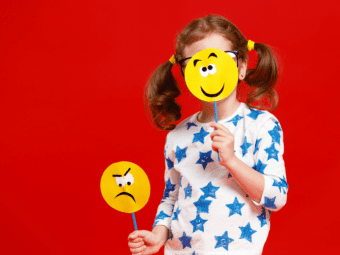 All of us have experienced anger at different stages in our lives. There is a primary method and there are auxiliary acts that can help you win over anger. Let me elucidate these three practices that will help you in understanding, controlling, and overcoming your anger. Read about them here.

Despite my best efforts, I end up having fits of rage and feeling guilty afterwards. How can I overcome this?

A common misconception is that letting out your anger can make you feel light. While it may be as true as false, the damage is irreparable.

Holding onto your anger is just as big a blunder, what is required is the ability to transform your anger, your emotional state, into love, compassion, empathy or any other stronger, better emotion than whatever that causes anger.

Just as there are different stages of anger, there are also two types of angry people. Click here to find out which one you are and what you can do to overcome it.

214 comments on this post. Please login to view member comments and participate in the discussion.