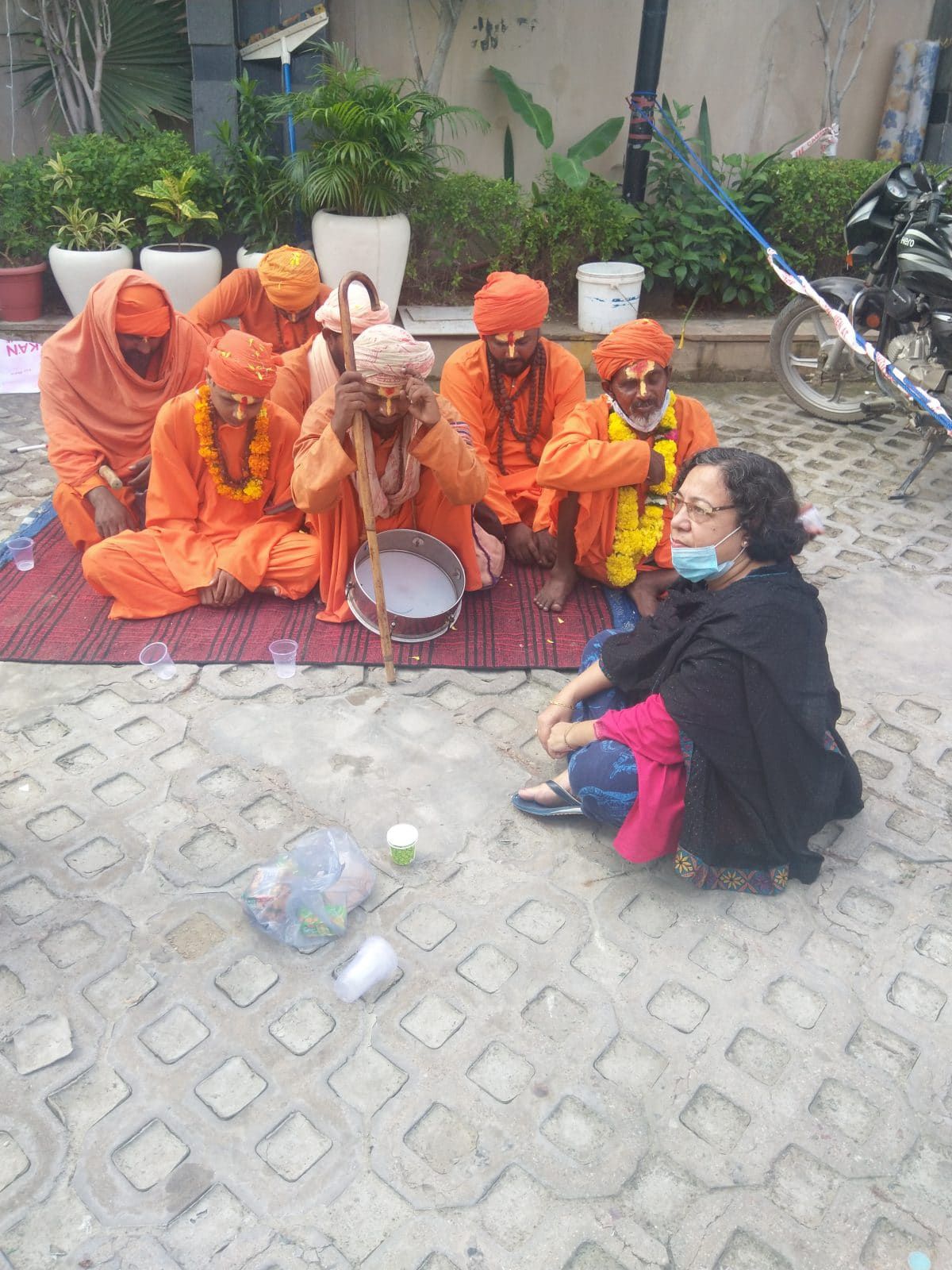 A Colour Under Colour

Bhajan, i. e., devotional songs, attract me like a bee to flower. Today morning, around 8.30 am a melodious group voice combined with the music of manjeera and dafli , attracted my attention. From my 4th floor balcony I noticed a group of 6-7 people, in orange coloured robes, walking slowly while singing a bhajan, holding one another, clearly indicating that they were blind.  I couldn’t stop myself and after 2-3 minutes of contemplation, picked some cash, a pair of extra chappals, (noticing some bare foots) covered my shabby looks, unbathed in night wear, with a dupatta and rushed downstairs.  Inside I was almost overflowing with emotions to help them in which ever way they needed.

On my request they stopped for a while.  As two out of seven were bare foot, I offered chappals but they said no to it since they are purposely barefoot. On my asking, one of them started to speak. This is what they shared :-

“We all are from Dwarka, on to a pilgrimage. Yesterday we were at Hanuman Mandir, Yamuna Bazaar, Delhi. One auto wala offered to drop us in Noida. We are roaming and since three days we have not eaten anything.”

Immediately I said, “Let me first arrange food for you, and for that let us sit somewhere.” There is a very small newly built temple room outside my society. That seemed the best option. By this time out of so many onlookers, one kind person also joined me and we made them sit comfortably on a rug. I requested the kind person if he will help me in helping them. He was quite willing. After asking the group,  we ordered tea and biscuit and arranged cold water and glasses for them.

The 5 members of the group were totally silent, only one person was taking lead and another one supporting him. I sat with them. They asked for my name and I said what’s there in the name and laughed it away.  The leader said that they wanted to share something more. I said of course, but have something to eat first. They insisted in talking first, and I said ok, as you wish,  till we wait for tea to come, we can talk.

The leader started to speak :-

“We are in your city. People here are offering us food, cash etc. We have no dearth of it. Some giving 50, some 100. Govt. also has made our all travels free. We also get few other facilities from Govt. This time we are on a pilgrimage  to Vaishno Devi. Reaching there won’t be a problem.  But as we all are soordas (blind), we would need to hire khachhars (ponies). The owners of ponies are all muslim. They won’t offer us a free ride. So we require 1600/- each for pony ride.  Give us 11,000/- cash and you will get the PUNYA (पुण्य ) of pilgrimage. “

All this was laced with many sweet sentences of blessings, lines from our scriptures praising the “Benefits of doing charitable acts”.   My North Indian friends would surely understand what I am trying to narrate. 😊

I got a bit cool, emotions wise 😄, and now mind took charge replacing the heart. I said, “Okay, let us go together. I will join you all and pay for all expenses.”  The head of group was totally prepared to reply back. He started to defend their expectation of 11,000/- in cash only. He used all possible excuses like how will you accompany us, we all are blind…. just paying for our yatra here and now would fetch you all possible PUNYA….. etc.   I was very polite with them but certainly not a fool.  I repeated my stand to accompany them.

In the mean time, tea came and  the head tried to persuade me with his talk that they will not eat anything until they do darshan of Maa, as this is their resolve. Later they obliged us by having tea but he stopped the group from having biscuits. Now he said that they won’t stop for bhojan (food) either and straight away asked me, “Mataji aap hamein paise dengi yaa nahin.” ( are you giving us money or not). I tried to shift the topic and very sincerely offered if they wanted to have an eye check up to which they straight away refused. By then I had noticed that five were actually blind but these two kept their eyes closed, leaving space for doubt.

That kind person who was helping me seemed wiser and he silently advised me to not talk much and wait and watch.

Now the leader was getting confused. He even said, “अच्छा आप कितने दो गी माता, ये तो बोलिये ” (please speak out how much would you give). This was enough for me for the day. I folded my hands, which they could not have seen, and retreated 😊. They were very confident in continuing with their roaming to attract another emotional fool, as their working day had just begun.