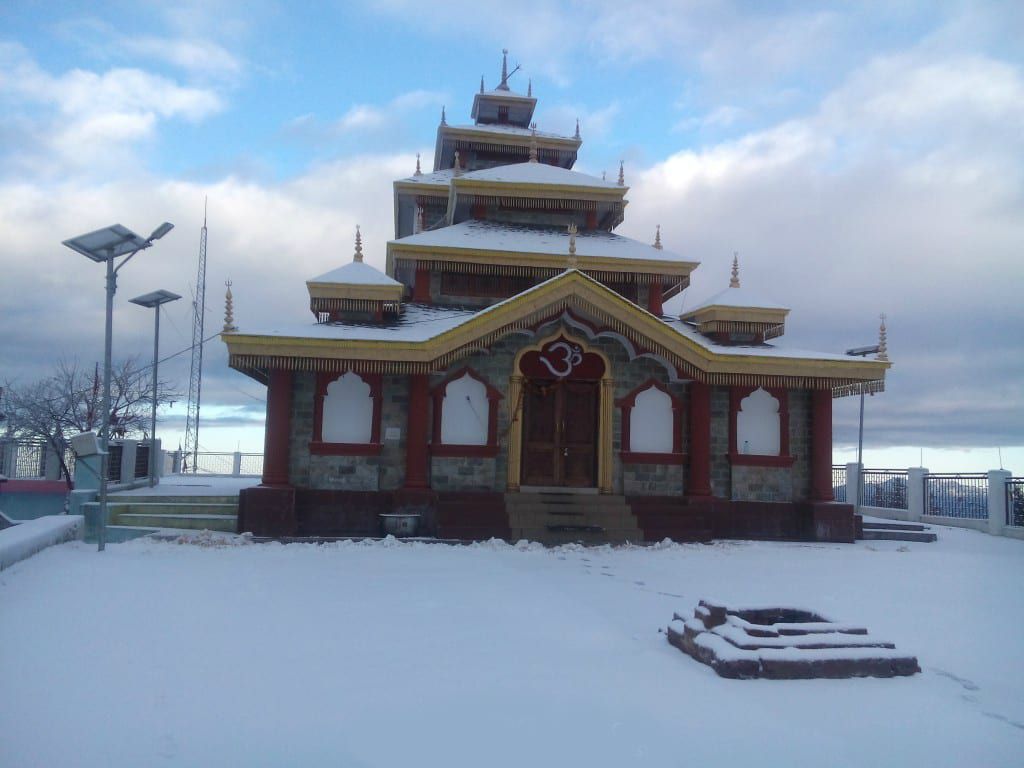 A Trip to Surkunda Devi Temple

A sadhu braving the elements with equanimity.

While studying in a college in Mussoorie, some college mates decided to go on a trekking trip to Surkunda Devi Temple. The temple is located about 35 kilometers away from Mussoorie towards Tehri. It is built at a height of about 10,000 ft from the sea level and generally receives snow when the neighboring low hills remain dry and denuded of greenery.

We were ill-equipped for the trip as in the name of provisions we had only water to drink and peanuts to chew. Pocket money was scarce and enough only to provide for tea and pakora at a roadside Dhaba but the raw enthusiasm of callow youth made up for the deficiency of material comforts. The weather in the December morning was pleasant. Sun’s rays were a soothing balm to aching joints during the tough climb up the steep hill. The view from the hilltop was panoramic; pine and deodar trees were standing majestically, tall and erect, as if in silent meditation in the flat land of Dhanaulty below, which draws eco-tourists and offbeat nature lovers in large number.

As we climbed gradually up the hill, the temple spires could be seen, dark clouds began to gather in the distant sky. The weather in hills behaves peculiarly and unpredictably. It is sunshine now and rain some moments later. The vintage hill people can be seen wearing a coat and hanging an umbrella on the coat collars even in summers!

Fearing rain or snow, we paid our obeisance hurriedly to the Goddess in the temple, which was deserted and the priest was nowhere to be seen. The door to the temple was, however, open but except for the five of us, no other soul was visible. No sooner we came out of the temple precincts, snowflakes fell gently on our heads. We looked for some shelter and fortunately found a derelict structure nearby which seemed to be a cowshed.

We had planned to return the same day even if we had to trudge back through the night but man proposes and God disposes. It was getting colder but we had no protective clothing for the night. The only option was to collect firewood and keep us warm through the night but the snowfall foreclosed that option either. Mercifully there were some half-burnt logs in the room probably left behind by some pilgrims after cooking meals.

There was some dry grass too which might have served as a bed to lie upon. Adversity does make strange bedfellows, as Shakespeare had said. Now the looming question was how to light a fire. I had not been hooked to smoking then. Necessity is the mother of invention, as the saying goes. Someone had a brain wave and volunteered to dash to the temple to search for a matchbox., which could be there for burning incense and camphor. The Goddess seemed to have some mercy on us and a matchbox could be found. We spent the night stoking the dying fire, narrating ghost stories ( despite being in temple premises ), shivering all the while, and waiting for the day to break…

The dawn was resplendent. All around the snow had spread a silvery sheet which was sparkling in the morning sun. There is no sight prettier than snow-covered landmass, trees, and the hills. It was like nature dressed in white vestal attire, a virgin beauty attracting the gods to a Swayambar (ancient ceremony of a bride choosing her groom from amongst the suitors).

We hastened to come out of our night shelter. There we saw a sadhu, wearing only a dhoti, walking leisurely around the temple despite snow all around and biting cold air. We could not believe our eyes. The sadhu, after completing his parikrama ( circumambulation ) around the temple, disappeared in the hill.

It is, however, not unique. instance. I have heard of many yogis living in the high Himalayas in caves bereft of any amenities round the year. And, of course, our Swamiji, did austere meditation for months in a ramshackle structure above Badrinath, with snow all around, bathing daily in ice-cold water, hearing the roar of predatory beasts in the night and putting up with the antics of rodents inside and howling winds outside bent upon tearing apart the dilapidated structure.

It gave us an idea of human adaptability and endurance. The sight pumped us enough to make our return journey with great gusto and with springs in our steps. The miseries and travails of the night-long vigil in sub-zero temperatures were well forgotten.

Retired from Central Govt Service. My search for a Guru ended with OM SWAMI ji. Swami ji ji has shown his compassion by throwing open this platform to the budding writers who wish to express themselves.

Empowerment
The Sounds of Silence