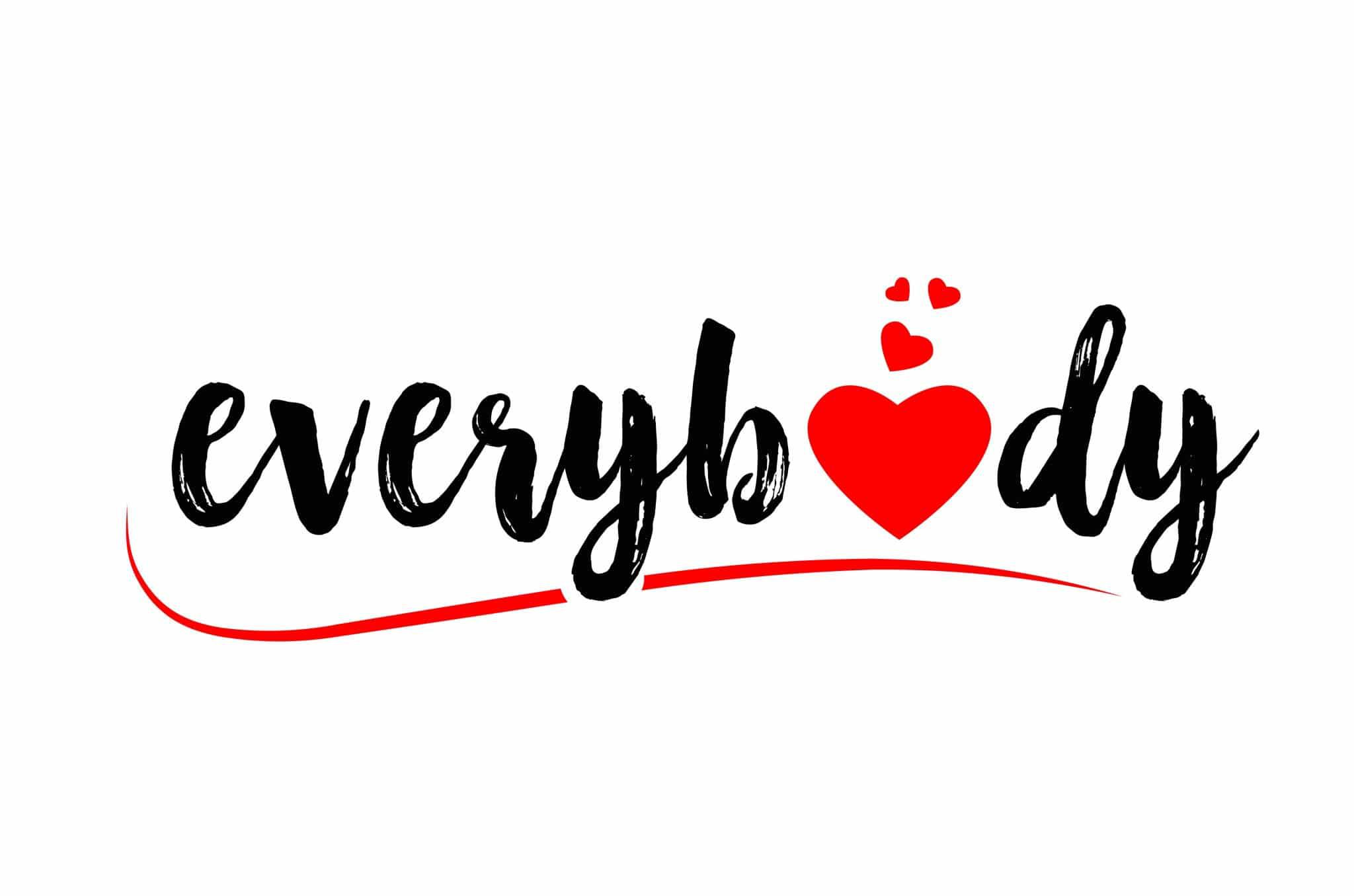 Thoughts On Loving Everybody

Some thoughts on loving everybody…

Early on in their relationship Ram Dass asked Maharaj-ji, “What can I do to get enlightened?” to which Maharajji replied, “Love everybody and tell the truth.” After a few days, he came back to Maharajji and said, “I tried it and found out that the truth is that I don’t love everybody.”

It’s pretty easy for most folks to bring someone to mind that they believe is difficult to love. How do we love the greedy banker, the lying politician, the religious leader who abuses their position, a deceitful lover, an internet troll, or someone who molests children? Many people in today’s society would insist these Souls deserve no love. Yet, if our goal is moksha (freedom), we have no choice but to love them unconditionally.

The kind of love Maharaj-ji was speaking about is agape or love without conditions. Ram Dass said, “Unconditional love really exists in each of us. It is part of our deep inner being. It is not so much an active emotion as a state of being. It’s not “I love you” for this or that reason, not “I love you if you love me.” It’s love for no reason, love without an objective.” It’s the same love Jesus spoke about when He said, “Agape your neighbor as yourself.”

As a pastor, police officer, and business owner, I’ve been through many confrontations with unreasonable and unscrupulous individuals. What does agape love look like in such situations? Loving someone doesn’t mean we approve of their actions. It doesn’t signify that we need to excuse negative or non-beneficial behavior. It does mean I need to look to neutral truth.

To love every person I encounter denotes doing what is most beneficial for them with the resources God’s given me. If someone has committed a violent crime, loving them means putting them in jail so they cannot hurt others and thus create more karma for themselves. If we meet a crooked politician, loving them may be planting a seed of honesty or ongoing prayer intervention.

Through my work with US Customs and the evangelical church, I’ve met several folks who have molested children. All of them, without exception, had faced some form of severe abuse in their own childhood. When I dug deeper, usually, I found a pattern of familiar abuse that went back or spread out for generations. Most citizens would recommend and approve of intense punishment for such folks – but is it loving?

As Ram Dass pointed out in the aforementioned quote, true love is without active emotion. For me to truly agape someone, I cannot be feeling drawn in any direction. If I’m emotional, my love has become an exchange that contains conditions. If there’s emotion, I’m attached, and my interactions with others using such love will create further entanglements.

A couple of decades ago, an assistant sheriff from my home in Calcasieu Parish, Louisiana, was discovered molesting his grandson. It seriously shocked the community and local law enforcement. When my mentor Brooks visited him in jail, he found that the man had been cutting his arm repeatedly with anything he could get his hands on. When Brooks questioned him about his actions, he replied, “It’s the only thing I can do to get some relief from the pain.” I’m not sure of his final fate, but he received decades in prison and lost his family. Was that agape to put him away? Or would love have been to get him help for his apparent mental and emotional illness caused by his relatives when he was a child?

I’ve considered how I would agape love someone who had raped my wife or daughter. Would I, like in so many criminal or business cases, be able to hold my emotions in check and find wisdom in a centered heart? Would I discern a sick and injured individual and show compassion, or would I demand punishment and retribution? Much of my reaction would depend upon the presence of mind to call for Maharaj-ji’s grace and the Consciousness of Christ – “Forgive them for they know not what they do.”

What about fallen gurus and spiritual teachers? The ones who end up mired in sexual scandal, embezzlement, or something worse. How do we agape them? Out on the net, there is no lack of bashing these individuals, which creates more and more attachment and karma. Having been a pastor who’s confronted several other ministers about their sexual and other improprieties, I have to say, yet for the grace of God, there go I. The temptation was always there, and it was simply the kripa of the Guru that got me through. When I can see myself in them, another Soul in a karmic predicament, then compassion can flow.

Likely the folks you need to love aren’t nearly as heinous. Some people may irritate you or work against your purposes, or they may gossip about you behind your back. And why do they do it? The same reason as the heinous folks – pain and a lack of agape (acceptance).

Genuine unconditional love is choosing to understand. It’s patient, and it’s kind. It doesn’t dwell on the past – it searches for solutions in the present. It isn’t superior – it understands we are all on the same path, and we all falter and stumble. It’s deeply compassionate. It also understands that we repeat this life/birth cycle thousands of times until we get it right.

How do you know when you are acting upon it? You can feel the clarity and centeredness in your heart. It encourages reconciliation over rejection. It always hopes, encourages, and looks to the future – it doesn’t dwell in the past. It doesn’t want to cause guilt – it just wants to foster resolution.

A furniture company with about three hundred employees in Dallas once hired me as their VP for a little over a year. This company cleaned the physical assets out of dozens of closed mortgage offices throughout the states during the mortgage crisis. They brought me in for my electronics and office machines expertise, something they didn’t have talent on staff to handle. They put me in charge of their used furniture department since we’d be handling all the pre-owned business machines we were pulling in the liquidation. At the time, I was in my early thirties, and the direct reports in the used furniture department were all in their fifties. Needless to say, most of my new team resented me from moment one.

For the first couple of months of my tenure, the former manager of the department did everything in his power to sabotage anything I wished to do. It seemed like each day there was new unnecessary drama or gossip. I started to get very irritated about it and made plans to speak with the president about the situation when it dawned on me I had never prayed for a solution. A few days later, God gave me an answer.

I knew from the company calendar that this person’s birthday was coming up just a couple of Sundays in the future. Having paid attention, I discovered that they loved classic rock album covers. So I went to Barnes & Noble and purchased a beautiful coffee table book full of album artwork and showed up on his doorstep the morning of his birthday. As I rang the doorbell, I held the book behind my back. When he opened the door, the first thing he said in a hateful tone was, “What do YOU want with me on a Sunday!?!” to which I replied, “Happy Birthday (calling his name), and I passed him the book through the crack in the storm door he made to speak with me. Somebody needed to go first.

Then he said, “I guess you better come in and sit down.” He brought me to his kitchen table, where he offered me a beautifully rolled joint of Maui Waui and a snack. We had a pleasant visit for about thirty minutes, I wished him a happy birthday again, and I went home.

The following week at work was undoubtedly much better. Then the following Sunday morning early, I got a call from him on my cell. He asked, “Can you pass by my house this morning? I have something for your family.” When I got there, I found his kitchen full of a thanksgiving-like meal he had made for us – even a homemade peach pie. He turned out to be a fabulous cook! As I stood there, overwhelmed in his kitchen, he said, “I appreciate you remembering my birthday.”

From that day forward, he became my absolute best friend at the company. We started eating lunch together every day. I got invited to his house every Friday afternoon for a meal. He watched my back like a hawk. He made sure I knew anything that happened anywhere in the enterprise that affected me in any way. Not long after, the company sent us out on the road together for several months. He is one of my most trusted and loyal friends to this day.

There are undoubtedly some people in your life you believe are hard to love. Try anyway. Make an effort. Go first. It will be worth it. If you don’t know how to do it, entreat the Divine. Maharaj-ji will bless your effort – that’s a promise. What you think is your ultimate challenge could be your greatest blessing.