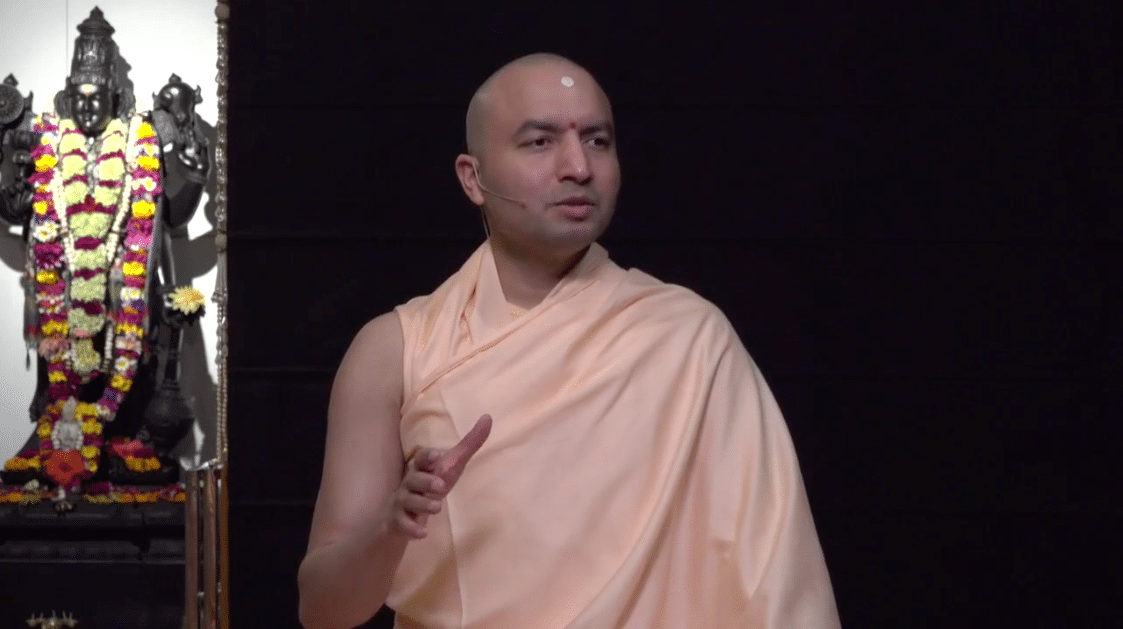 04:46 – 11:03 : So, it’s good that today is the final discourse for the month of March. Till now, I have told you about the three major pillars of Siddhi. First is, सत्यनिष्ठ होना (Being Truthful), ie. neither Mithya-Bhaav (False-Emotions), nor Mithya-Aacharan (False-Behaviour), nor Mithya-Vachan (False-Words), only Mithya-Karma (False-Acts) is allowed!! (Laughter). Just joking. Maybe, it suits Kali-Yuga. So, neither Karma, nor Emotions, nor Behaviour, and nor Speech, should be false.

अगर किसी को अच्छा बोलना है, तो कोशिश यही रहनी चाहिए कि सत्य ही बोला जाए। (If you have to speak good about someone, then you should try that whatever you say, should be Truthful).

Some 3 years back, I read a very good book. In it, it was written that there is a huge difference between the European parents, and American parents! For example, in the US, things are said in a very exaggerated manner, and a lot of appreciation is there. If suppose, a child has drawn a picture of Earth, and its circle isn’t well drawn (ie. it’s oval-like), then the child is told, “Son, you aren’t less than Picasso! Amazing! Keep it up!”. So, if from childhood itself, we make someone accustomed to false-appreciation, that child will forever be sad! Whether he/she is a boy or a girl. They would expect such things from their partner, boss and children too. So, it all gets started if someone is told words which are spoken with Mithya-Bhaav (False-Emotions).

If you want to attain Siddhis, without chanting any Mantra, then the basis of that is “Being Truthful”. No matter what happens, What is the need to speak lies? Why speak a lie at all? Why does a person utter lies? To save themselves from fights, thinking that, by saying a lie, the chapter would be closed! And a lot of times, you have to speak lies to impress someone. In both the cases, you are actually weakening your bond with that person, and most importantly, you are weakening your bond with your Ishta (Diety), if you make use of False-Behaviour, or False-Emotion, or False-Speech.

To practice Yog, one should make an āsan (seat) in a sanctified place.

Kaunteya (Arjuna), place my asana only at a clean place. So, a Yogi prepares a neat and clean place, and then places his/her asana there.

If it is Important, then what I am telling you is “Non-Negotiable”, इसके बिना काम चलेगा नही। (You cannot workout without these). There cannot be any bargaining with this!

God cannot reside in a dirty mind. So, you decide – Whether you want to take the Rasa (Nectar) of Bhakti, ie. you take some joy in Bhakti, and that’s it, work done, Or, you want to go near to God, and experience that Divine Feeling. If the latter is the case, then no matter whatever worldly reason you may come up with, the filthiness of your mind is your individual responsibility. There is no explanation for it, all are just excuses.

From my Purvashram days, I used to say, “God never lives in a small heart, and never leaves a big one”.

These were not covered in Swamiji’s discourse, so you may skip this section.

Shri Krishna, in the Bhagavad Gita, talks about how one should speak and what is the austerity of speech :

Words that do not cause distress, are truthful, inoffensive, and beneficial, as well as the regular recitation of the Vedic scriptures—these are declared as the austerity of speech.

This is similar to what Swamiji has put forward as Satya-Vachan (Truthful Speech) in the first pillar of Siddhi.

Also, Shri Krishna talks about the austerity of mind, which resembles well with Swamiji’s second pillar of Siddhi :

Serenity of thought, gentleness, silence, self-control, and purity of purpose—all these are declared as the austerity of the mind.