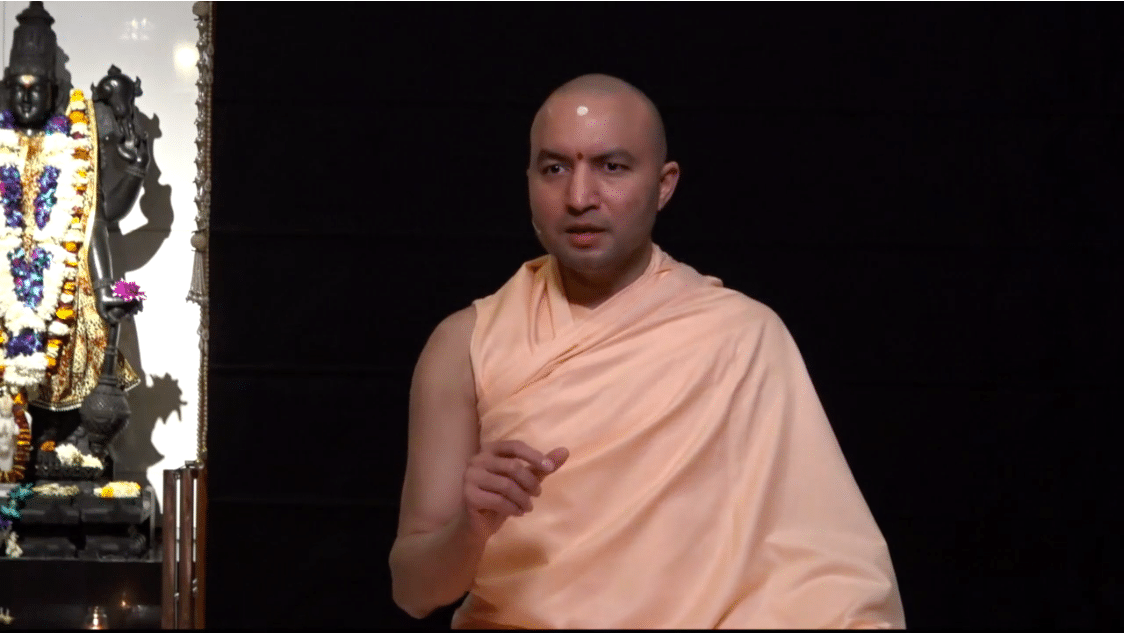 29:54 – 34:19 : I had once told you a short story – Once there lived a King. He was getting old. So one day, the king’s barber says to the king “Your majesty, you are getting old! Some white hairs have grown up in your beard. Shall I remove them?”. On hearing this, the King becomes angry! “He’s calling me old! Huh!”. “Send him to Jail for three months! And make sure, he gets flogged/whipped there!”. You choose any old man, and try complimenting him – “Sir, you look 50 years younger!”. No matter whether his face is like an unpressed cloth or not, he/she still believes that your words are true! Try telling a 40-year old person – “Sir/Mam, you must be in your twenties!!”. Upon hearing this, he widens his chest and starts walking!! (Laughter).

Lie is such a thing that according to one’s interest, it may be pleasing for some, and unpleasing for others. But, suppose in a lie, the person’s praises are being sung, then everyone likes it! “You are ultra-scholarly!!”, “No one is kinder than you!!” etc. This is how the devas (demigods) used to please Narada Muni in the past times! And then, they used to get their work done through him.

So, the King said “Put him in the Jail!”. “He’s calling me Old.”. And “getting old” is something which no one wants. A person who is in his/her twenties/thirties says that “I don’t care”, whereas, when that person reaches his/her forties/fifties/sixties, when the signs of old age spring forth, that person starts becoming a bit anxious. Anyways, so the King goes to his royal court, makes his chief minister stand up, and says “Tell me. Tell me truthfully. Am I getting old? Are you able to see my white hairs?”. The Minister replied, “Your Majesty, white hairs have really come up!”. “Put this man in Jail too!”, the King responded. King was in angry mood that day, he didn’t get those delicious Aaloo Parathas in the morning! (Laughter). So the King said “Put him in the Jail and whip him! He doesn’t know how he should be talking to his King”.

Now, the people assembled there, started shivering with fear that “What exactly does the King want to hear?”. The King enquires the other minister, “Tell me, do I look old? Do I have white hairs?”. He replied, “Maharaj (Your Majesty)!!, you and white hair? Is it even possible? Your beard hairs are as dark as the moonless nights!! They are so dark!”. The King ordered, “Put this man into Jail for 6 months!! Get him to suffer from 600 whips! This person’s words are sheer lies. I very well know that I have white hairs, and he’s saying otherwise. I had mentioned earlier that whatever you speak, speak the truth!”.

Now, the King is absolutely livid! This time, he makes Mulla Nasruddin stand up. “Mulla! You are a representative of religion. Tell me, are you able to see any white hair in my beard?”. Mulla replied, “Jahanpanah (Your Majesty), I am suffering from Colour Blindness!!! I cannot differentiate between white and black. Both appear same to me. You appear to me exactly as before”. The King takes out the garland from his neck, and puts it on Mulla’s neck!

So, somewhere or the other, Society wants “False-Behaviour (Mithya-Aacharan)” or “False-Emotions (Mithya-Bhaav)”. Let me tell you, if you are a good saint, you can’t imagine how much pressure there is to maintain “False-Emotions (Mithya-Bhaav)” or “False-Behaviour (Mithya-Aacharan)”! You will be amazed to hear this. Because Society gets happiness if some saint sits in Mouna (Silence), or if some saint constantly calls himself/herself special, or if the saint keeps negating other people/philosophies. Society thinks, “No, this person must be special. He must be equipped with Siddhis, or certain powers”. In reality, the Guru has done nothing, but has just established a big business/organisation. Nothing more than that. But, nobody is ready to hear the Truth, or to accept the Truth.

34:20 – 37:15 : So, the first step of Siddhi is “Satyanisht hona (Being Truthful)”. And being truthful doesn’t mean that “You speak those truths which Hurt others”. “If it’s possible to keep quiet, then be quiet. If somewhere, just smiling can do the job, then just smile and get the job done”. It is not necessary that whatever is there in your mind/heart, you have to express it. Because, whatever you have in your mind, it’s just “your opinion“. It’s just a perspective. The other person may have different viewpoint/perspective.

And, when a person moves closer to the Attainment of Siddhis, owing to “False-Emotions (Mithya-Bhaav)”, “False-Behaviour (Mithya-Aacharan) and “False-Words (Mithya-Vachan)”, Siddhis get destroyed with high intensity! Just like, suppose you are filling a bucket with water, ie. Siddhis are getting accumulated. But, the bucket has a hole in it. Due to that, you may be filling the bucket with water, but it will keep on draining out from the bottom.

Now, just imagine that bucket, which doesn’t have a bottom at all! You are filling from above, and it is draining as soon as you are filling. Walking on an untrue/false path is somewhat like that, as far as Siddhis are concerned. When a person speaks/behaves/expresses falsely, then no matter what Austerities, Sadhana etc he/she undertakes, at that very moment, it is getting drained out/spent.

And, a person who has to speak a lot, cannot be Satyanisht/Truthful. And hence, it is best to “Speak Less”. The lesser you speak, the more you can be grounded in “Truthfulness”. The more you speak, the more you have to, somewhere, add/join words. Everyone is basically watching the other person’s face only, while speaking, right? That “Is he/she liking what I’m speaking? If yes, then let’s stay on course! If he/she isn’t liking, then let’s change the line!”.

And for those, who have reached very high spiritual standards, for them, there’s another aspect. That is “The courage to hear the Truth”.