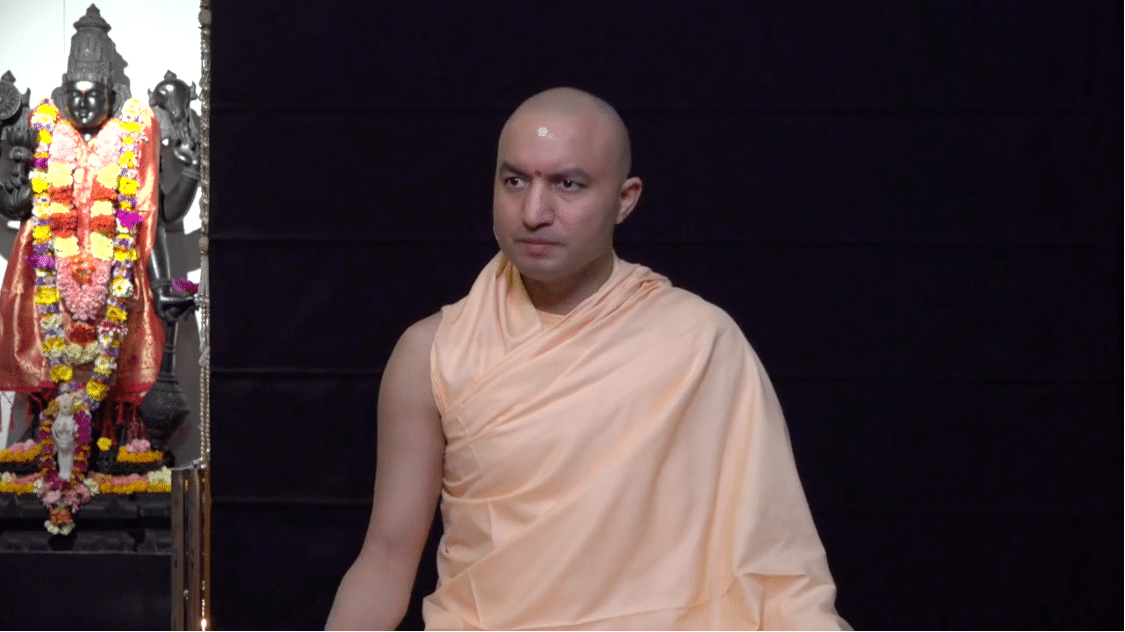 But, a lot of times, it happens that even if you are truthful in words, behaviour and expressions, still, you do not attain Siddhi!

So, a person who has started walking on the path of Truthfulness, Siddhis will come to him/her just as moths fly towards Fire. Even for the Siddhis which you are not working towards, even those Siddhis fall into your bag! And this, I speak, with complete conviction. You try to do this. If it doesn’t occur, then change your name! (Laughter) Change your name to whatever you want.

So, a second pillar is required as a lot of times, Truth isn’t sufficient. Just speaking the Truth isn’t enough. Because, we live in a society, and society lives in us. Just like, Vishnu lives in Vishwa (World), and Vishwa (World) lives in Vishnu, society lives in us. Because, when a person is sitting alone, whose words are making him/her sad? Whose contemplation is making them sad? The contemplation which produces sadness, there is always some other person in it, other than you. The contemplation is saddening only when it is associated with some other person. Because, Society has come in our thoughts.

When you are sitting in silence, and suppose you are sad over some issue ie. some thought came and it made you sad, it laciniated your heart, then that thought must be of some living being! That thought won’t be of any mountain, or of any rock. If suppose, Shri Hari Bhagwan’s Vigraha (Idol) gets hurt, you won’t feel as bad as when some loved one of yours gets hurt. As far as talking is concerned, we say that God is ours. But, that permanence, that relationship, cannot get established with God, until a person’s Mann (mind) gets Nirmal (Serene). It is impossible. That is why, there have been numerous Bhaktas (Devotees), who weren’t Sadhaks (Seekers) if we see from the Sadhana point of view, they weren’t doing Yoga or Meditation, they weren’t sitting for 20 Hours/Day in proper Asana (Posture), still they had all the Siddhis with them. Why? Because, They had a strong relationship with God. A true and firm relationship with God can only be attainable to that person who has a Nirmal Mann (Serene Mind). Until your mind gets serene, you haven’t even crossed the first stair of Sadhana. Such is the importance of a Serene Mind.

15:46 – 18:18 : And, what do we mean by Nirmal (Serene)? A word comes in Sanskrit/Hindi – मल (Mal), meaning “that which is left”. Whatever we accept, that thing will have some Mal (Leftover). Some Residue will obviously be there. Whenever we retain some emotion, which emaciates our Austerity, our Consciousness, that emotion, somewhere or the other, leaves a residue on our mind. Iron gets rusted if there is some residue over it. So, the bad emotion which we don’t sacrifice, will dirty our mind. By being Nirmal (Serene), it means that we don’t accept that bad emotion, and we don’t act on it. If we don’t save it, then there won’t be any residue of such emotion.

How swiftly a person can “let go” of negative emotions, that depends on how “Sthitpragya (Transcendentally situated)” that person is. How Gyaani (Knowledgeable) that person is!

(Quoting from Bhagavad Gita, when Arjuna enquired to Lord Krishna – Who’s a Sthitpragya?)

O Parth, when one discards all selfish desires and cravings of the senses that torment the mind, and becomes satisfied in the realization of the self, such a person is said to be transcendentally situated (Sthitpragya).

The only reason of a person’s grief/sadness is that person’s “Agyaan (Lack of Knowledge)”. If you have expectations from somebody, and it is not getting fulfilled, then grief comes. It’s lack of knowledge only. Why expectations at all?

If you have desires in your mind, and they aren’t getting fulfilled, then grief comes. It’s foolishness only. Why desires at all?

Some willpower is needed, and some Sattvikta (Goodness) is required. The purer the mind is, the more serene it becomes.

How to Wake Up Early, and Be Happy!
13 – Private Privilege