The mind and the five organs of perception I.e five senses/प॔चज्ञानेन्द्रिय together form the mental sheath/मनोमयकोश. Thus mental sheath is Mind+ Capacity to see, hear, taste, smell and feel touch (located in there respective gross organs – eyes,ears,tongue,nose and skin)

Mind is constituted of thoughts in a state of volition.
e.g. ” Shall I eat or not?” This is the thought in a state of volition. It is the mind that perceives the objects of the world  through the five sense organs. If the mind does not back the sense organs/ jnanendriyas,  they cannot receive any stimuli. We will take the same example as in previous part (boiling milk) to understand this concept.
You are standing near the gas stove to boil the milk. But sometimes  milk start spilling over and you are not aware of it. This happens when your mind is somewhere else. It is not available to backup the sense organ( in this case the faculty of vision). Eyes are there but the faculty of vision is not backed up by mind. So it cannot receive external stimulus. So how can hand go to switch off the button? Because Mind only directs the organs of action to respond to the world and which itself is absent here.
Thus five jnanedriyas are meant to perceive the world, and five karmendriyas meant to respond to the world.  But only when backed by the mind.

The mind is the seat of emotions like anger, jealousy, love, compassion, etc. Mind stands for what we call the ‘ heart’ ( emotional faculty). Physical heart is the part of gross body, and not at all feels the emotions.

Mind integrates various perceptions from the sense organs/ jnanendriyas and passes them on to the intellect ( for judgment) and relays instructions to the organs of actions/karmendriyas.

It is classified into four according to the different functions it performs.

These are not actual divisions within the Mind, but these are only functional divisions.  The Mind only is called by 4 different names based on the function it performs. E.g. Same person is called a painter when he paints and a dancer when he dances.

Thus when it feels or  doubts it is mind, and when it thinks or decides it’s intellect.

Memory- The function of memory is to receive and record our experiences.( reflection and recollection). The sense data received from all 5 organs of knowledge are stored in the memory as impressions and can be recollected as and when.
Ego- The ego does not mean pride. It is the sense of individuality, the notion of doership. The ego is there with every thought. It owns them as ” I doubt”, ” I decide”, ” I remember”, ” my anger”, and so on….

( some may have pride and some may not have it but all have the notion  of doership/ ego except a realized person and the Lord)
Thus coming back to the intellectual sheath- ( Remember this is only the functional division of mind.)

The intellect gathers knowledge,  remembers, analysis, enquires into problems  and discriminates.The Intellect discriminate between right and wrong, real and unreal and so on. Intellect is where you have all the ideas about yourself ( as the jiva). It is not aware of the fact that you are Awareness itself. Thus intellect is the seat of the ignorance of your True Self.  Once the Self- knowledge operates through the intellect,  suffering based on limited ideas about yourself will end. Thus through enquiry,   Self knowledge arises in the intellect.
Thus from the enlightenment perspective intellect is the most important aspect of the subtle body since liberation is nothing but the removal of the ignorance from the intellect. In common parlance, intellect is called the  ‘head’ ( like mind is called ‘heart’.) 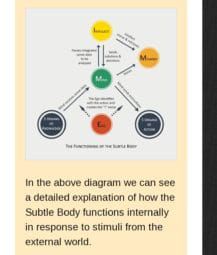 Thus subtle body( 3 koshas) is responsible for the actions of the gross body. It is the driver of the gross body which is like a vehicle ( we have seen it in previous part.)
We will know about the Bliss sheath/ Anandamaya kosh which is nothing but the causal body/Karan sharir in next part. This is the most important sheath as it is the cause of our gross and subtle bodies .

We All Are Equally Rich!
Yoga Psychology for Anxiety