We are much more than the senses

The Guru came unexpectantly into my life

I wasn’t searching for a Guru.  It was an inner experience that I had that led me to one, in a most curious manner

It was in 1993, that I experienced this vibrant luminous, living light.  It was 3am in the morning; I had woken up, and was just lying there, when I felt myself sink into that state (trance) and I was ‘lifted out’ my body and shown.  I won’t mention here what it was I saw, but I knew this was from where all mantras came.  There were beings with me, there was a warning at my left, and there was this flow of intuitive knowledge.  I knew I had to remember it, and it took a great deal of effort to remember it and bring it back from that state to this.

Somehow it was significant what I had experienced.  Whilst in that state I felt if I had gone through the ‘door and I somehow ‘knew’ it was a ‘door’. I would not have come back. I also knew what I had to do to enter it.

Next day, I went to buy a book.  However, for some reason I ended up picking up the wrong book, and never noticed this, even though it was on the counter.  It was as if I had been blinded to it. When I arrived home, I felt quite cross with myself for having come home with the wrong book, how come I never noticed?  Upon looking inside the book, someone had put a piece of blue A5 piece of paper, just inside the first page.  The paper said ‘One moments Luminosity, dispels a life time of ignorance’.  So I rang the number. This was in 1993, just after the vision.  It just so happened that this person was going to see this Lama – Mahayana Buddhism in the Kagyu Tradition.

Well, having experienced all this luminosity and this sheet mentioning about it, I just had to go.  I had not any clue about Buddhism, but I wanted to know what I was experiencing.  In fact the first thing I asked the Lama was, ‘What was this that I was experiencing whilst meditating?’, and he mentioned the Clear Light.

Then there was this ‘knowing’, this ‘understanding, ‘between us.

Many years later, when doing my BA (Hons) Divinity degree, I was doing some private research on ‘my vision’ what I had seen.  I came across some writing, and I wrote and asked permission of the author, who lived in India, if I could use some of his pictures.  Thus, began a series of correspondence.  I ended up helping him with his English, and edited a book for him, and he introduced me to Swami who was of the Samacharya path.  It was whilst researching into this, that brought me into contact with my teacher, whom I stayed in India with for six months and was initiated into Sri Vidya and took Sannyasa.

Swami contacted me, and I ended up helping him with his book, as his English, was rather pigeon English.  Thus began a flood of correspondence back and forth regarding the book.  He invited me to India.  So, I went for six months to India, to get initiated.  I wore white for three months, then was initiated into sannyasa.  This was to do with Sri Vidya, which is outside of any creed, religion or colour.

I spent the whole six months at the Temple, living in a room at the side of the Temple.  I was doing my degree at the time, and had asked to take a year out, but they said no, so I had to do my course from India, and I had no books with me.  Doing all my essays for college, and emailing them. I was also taking ‘dictation’ from Swami daily and writing it up.   Indian philosophy and some Upanishads, Sri Vidya and a commentary on the Sri Lalitha Sahasranama.  Learning all the mantras he had given to me, meditation, and learning the Sanskrit alphabet, and working through some workbooks in Sanskrit he had given me. Time really stood still, and looking back I wonder how it was all possible.

Again, there was this ‘knowing’ between us.  There was just something special took place, and from the moment I decided to go to India, a real powerful peace enveloped me, and has stayed with me since.

Swami did not initiate for sannyasa unless a person had been married.

My children were grown up, and Swami had asked my husband for permission.

Our marriage was a strong marriage, and we had grown spiritually together.

This is how ‘spot on’ the cosmic is with its timing. All the time, this had been going on with me, ‘this call’, unbeknown to us both, a cancer had been growing for 10years in my husband.  According to the lung specialist, he said it was a very slow growing cancer to begin with, but once it reached a certain size, the doubling was quicker.

I had no sooner, returned to UK, when a few months later, my husband was diagnosed with 6 months to live.  An astrologer has said since, when they looked at his chart, there was nothing no one could have done, and herbs also would not have cured him.  It was his time to go.

My husband supported me and stayed with me on my return, and the night before he died, he said” I love you for eternity”. He somehow knew he was going to die the next day.

Pictures of us both. We’d been together for 33yrs. 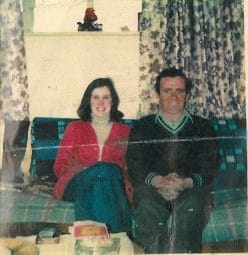 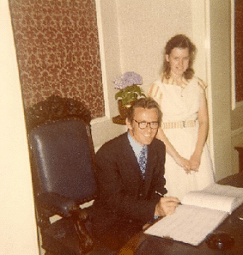 On arrival back in UK, a letter was waiting. I had to do jury duty, and now my college, who would not let me take a year out to go to India, now wrote and asked me if I wanted to take a year out to consider ‘my baptism’.  I had changed my name legally, to the name Swami had given me.  I said, ‘no’ baptism was only the beginning, you had to be born spiritually to go through the door.   I finished my degree, with endless questions been fired at me, and one of the worst people having a go at me, was a Hindu who had converted to Christianity, who was also doing the degree. 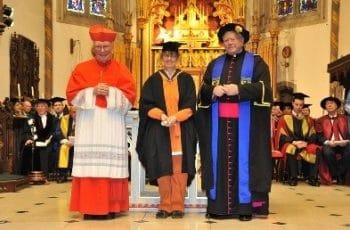 It’s only because my meditation all these years, had built my body which is a Temple on a solid foundation, that when everything came at me, and it did, from everywhere, that it remained firm, and unmoved.

My spiritual director who had been with me 12 years in the church, still met with me even though I had left the church, and he said one day, ‘most people would have been bowled over with what you have been through’.

I never went in search of a guru.  They found me, and I wasn’t looking for any guru now.  Om Swami kind of just ‘popped’ up on my YouTube channel, with a video answering a question that had been on my mind, and he has explained some things I have pondered about.

I haven’t rushed to teach or set up anything.  I saw too many Guru’s not free to make decisions, and chained to ‘trustees’ who direct them and not vice versa.  UK is not India, and things worked out that I have managed to live on a very small pension, enabling me to really learn all that I was taught, and practice all the mantras that I was taught these last 14yrs, and to meditate.

Have you ever had co-incidences happen beyond explanation?


Login with Email
No Account? Create One
Everything is Perfect
Amazing Facts # 1