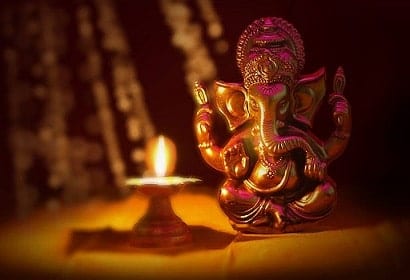 “Return the modak, Bhrata Gajanan,” I said, frustrated. “Not every time, Maa makes modak, it is for you only. I also have a part in it.”

Putting it in his mouth with his long trunk while running away from me, he said, smiling,” Dear sister. I love you very much but what can I do?” Jumping through bushes, he continued,” My love for Maa’s modaks is slightly more than what I have for you.”

“Is that so?” I asked, still chasing him.

“Yes,” he replied, gulping the modaks, one by one with his trunk while he ran.

I stopped and replied to him, smirking,” Since you have made it very clear, Bhrata Lambodar, that you love Maa’s modaks more than your beloved sister. Your dear sister is left with no other choice than…”

“Than what, Kishori?” He stopped running and asked, worried.

I joined my hands, closed my eyes, and said,” Oh Lord Vigneshwar! You are the remover of obstacles for your devotees and the creator for those who trouble them. My bhrata is creating trouble for me so that I couldn’t taste Maa’s modaks. Please remove the trouble that he is creating so that I could enjoy her delicious modaks, I evoke you, Bhaalchandra. Bring the modaks back to me.”

As soon as I finished, a radiant yellow light emerged from him and manifested as his reflection. The bright yellow radiance was quite hard for my eyes to see. It carried a noose, a goad, and an axe in its three arms. The last hand was empty. As soon as Bhaalchandra was evoked, he with his goad stopped Bhrata’s trunk from eating more modaks. With his noose, he stopped his hand from reaching the pot either. Then he took away the pot from Bhrata’s hand and with his elegant long trunk, brought the pot and placed it in my hands. He then, again with his trunk, put the modak from the pot in my mouth.

As I was eating the modaks blissfully, Gajanan shouted,” Is this the way to treat your Bhrata, Kishori? What will Maa think when she gets to know all of this?”

Paying no heed to his words, I ate one more. Bhagwan Bhalchandra had held Bhrata in the same posture for quite some time now.

I stopped eating and addressed Bhagwan Vigneshwar,” Oh Dev, I am indeed very grateful to you. It is due to your mercy that I could enjoy Maa’s modaks. You never fail to protect your devotees, my lord. The endeavor for which I evoked you, has come to an end. Please release my bhrata and always shower your blessings on me, Bhagwan.”

As soon as I requested, he released Bhrata from his goad and noose, and showing his benediction mudra while nodding, he again merged into Bhrata.

Bhrata came rushing towards me and said,” Kishori, why did you do that? Using my divinity against me!!!!”

I replied with a satirical look and a sarcastic smile,” Well, Bhrata, what else could I do? And moreover, my guru has taught me well that if you could defeat your enemies simply by the intellect, why to expend any power?”

I continued looking at him and said,” Isn’t it so? Gurudev.”

A smile bloomed on his face, fading away, the clouds of seriousness and he placed his palm on my head and said,” I am very proud of you, Kishori. You have truly imbibed my tatva.”

I touched his feet. Meanwhile, Maa came. “Dinner is ready. And what am I witnessing?” Looking at the pot, surprised, she continued while addressing Bhrata,”Vinayaka. In spite of you being here, the pot is still half-filled and in Kishori’s hands, How could this be possible? Am I dreaming?”

Bhrata started to reply, feeling embarrassed about what had happened, when I took over,” Actually Maa. Seeing me in despair, Bhrata Gajanan himself gifted me the rest of the modaks. Isn’t it amazing?”

Maa replied in a mocking tone, “Well, it is. Though I doubt it but still, Vinayak, I am glad that you, at last, learned to share your modaks with your beloved sister.”

Bhrata replied instantly,’ Yes Maa. After all, she is my sister and it is well known that my love for my beloved sister is slightly higher than that of your modaks. Isn’t that so, my dear sister?” He asked me while looking straight into me.

I replied raising my eyebrows and with a large grin, feeling shocked,” Yes. Why not Bhrata? The whole world knows it and more than that, I know it very well.”

“It’s very blissful to see you two together in so much affection,” Maa replied. “Let’s go now. Your father is waiting for us.”

Pranamya sirasa devam,
Gauri putram, Vinayakam,
Bhakthya vyasa smaren nithya,
Mayu kama artha sidhaye.
The learned one, who wishes,
For more life, wealth and love,
Should salute with his head,
Lord Ganapathi who is the son of Parvathy.
Prathamam Vakra thundam cha,
Ekadantham dveethiyakam,
Trithiyam Krishna pingalaksham,
Gajavakthram Chathurthakam.
Think him first as god with broken tusk,
Second as the God with one tusk,
Third as the one with reddish black eyes,
Fourth as the one who has the face of an elephant.

Lambhodaram panchamam cha,
Sashtam Vikatameva cha,
Sapthamam Vignarajam cha,
Dhoomra varnam thadashtamam.
Fifth as the one who has a very broad paunch,
Sixth as the one who is cruel to his enemies,
Seventh as the one who is remover of obstacles,
Eighth as the one who is of the colour of smoke.
Navamam phala chandram cha,
Dasamam thu Vinayakam,
Ekadasam Ganapathim,
Dwadasam the gajananam.
Ninth as the one who crescent in his forehead,
Tenth as the one, who is the leader of remover of obstacles,
Eleventh as the leader of the army of Lord Shiva,
And twelfth as the one who has the face of an elephant.
Dwathasaithani namani,
Trisandhyam ya paden nara,
Na cha vigna bhayam thasya,
Sarva sidhi karam dhruvam.
Any one reading these twelve names,
At dawn, noon and dusk,
Will never have fear of defeat,
And would always achieve whatever he wants.
Vidyarthi labhadhe vidhyam,
Danarthi labhathe danam,
Puthrarthi labhathe puthran,
Moksharthi labhathe gatheem.
One who pursues education will get knowledge,
One who wants to earn money will get money,
One who wishes for a son, will get a son,
And one who wants salvation will get salvation.
Japeth Ganapathi sthothram,
Shadbhir masai phalam labeth,
Samvatsarena sidhim cha,
Labhathe nathra samsaya.
Results of chanting this prayer,Of Ganapthi will be got within six months,And within a year, he would get all wishes fulfilled,And there is no doubt about this.
Ashtanam Brahmanam cha Likihithwa ya samarpoayeth,
Thasya Vidhya bhaveth sarvaa ganeshasya prasadatha.
One who gets this prayer,
Written by Eight Brahmanas,
And offers it to Lord Ganesha,
Will become knowledgable,
And would be blessed with all stellar qualities,
By the grace of Lord Shri Ganesha.


Login with Email
No Account? Create One
Life-Gazing, Awfully Liberating
Strange but Real