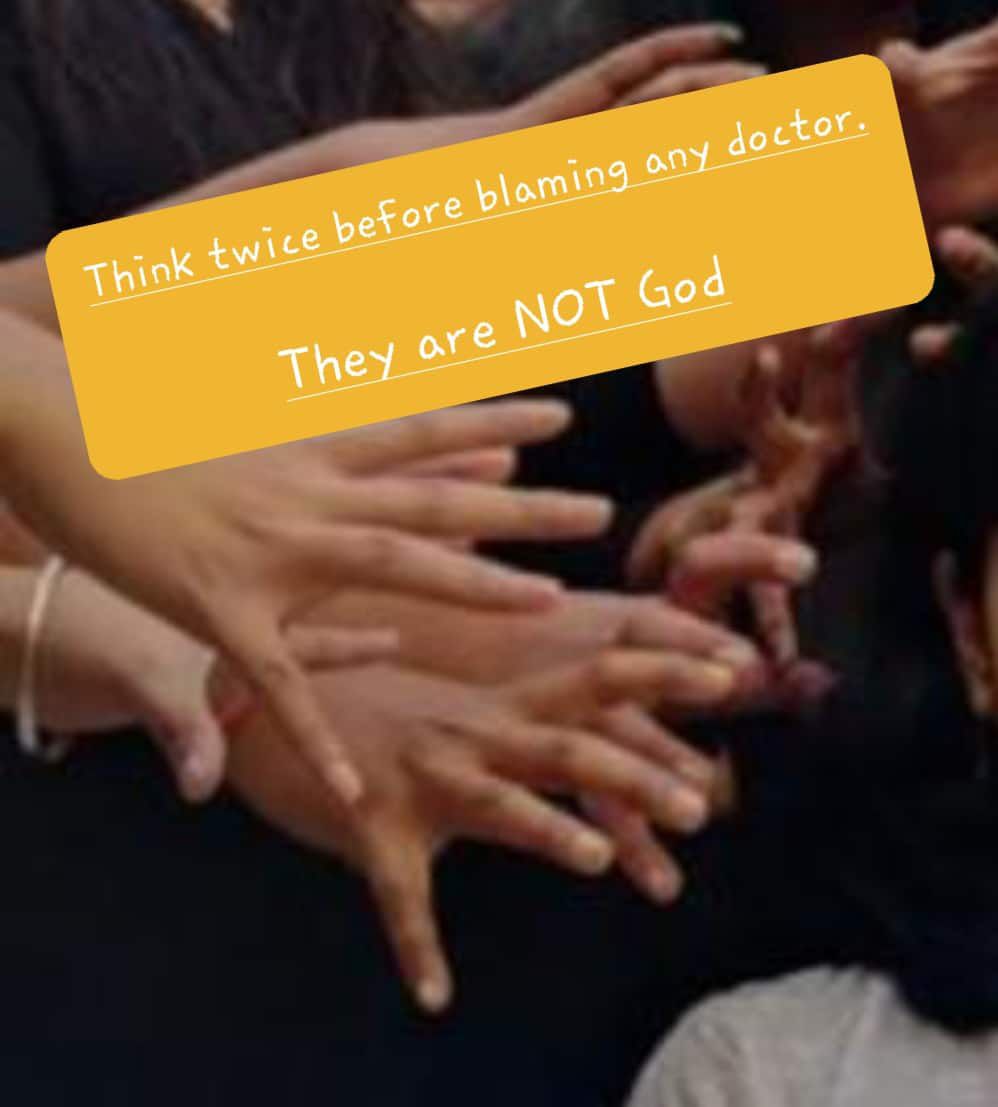 Doctor is NOT God

(Sharing the thoughts of Medical fraternity)

“Their God is Dead.”

This is the headline which is passing through the minds of scores of patients who were treated by Dr. Archana Sharma. A Gynaecologist par excellence, a Gold medalist, always scoring above 90% in academics, brilliant orator etc is no more with us. It’s not just a loss to the family but also a huge loss to the population of Dausa Rajasthan where she was serving since years. The rural area, about 70 kilometres from Jaipur, was served with love and dedication by the ex-Associate Professor of Gandhinagar Medical College. Today it has lost a shining star.

Violence against Doctors has become common in India. The causes are well known. Lack of government facilities, rising costs, media hype, political interference,unusual expectation of patients etc. We as a society have failed to educate our public that “Doctors are not God.”

Common man has the impression of “Noble profession” as a free service.

Add to this the irresistible urge of politicians and media to exploit the situation. It is very easy to blame the Doctors and earn the sympathy of the grieving relatives. In Dr. Archana Sharma’s case too, it was done.

The patient’s body was taken to her village by the consent of her relatives, because they refused the post-mortem examination. It has to be, because police was informed of the death (as is always done) and it allowed the body to be taken. The local politicians brought the body back to Dausa and sat on Dharna outside the hospital. Media was called and the dharna grew. Local Police officers first tried for “compromise” but then registered a case under section 302 not only to satisfy the politicians but also to threaten the doctor totally ignoring the Supreme Court Jugdement in Jacob Mathew vs State of Punjab and Ors: AIR(2005)SC 3180, an FIR for negligence cannot be registered unless the police authorities obtain an expert opinion either from SMC or MCI or Distt health authorities.

Post partum haemorrhage is a known severe complication and so the Doctor shouldn’t even be asked why it happened. Instead Dr. Archana was accused of committing murder, that too a pre-meditated murder.

Section 302 can be invoked only when there is a “clear intent to kill,” and it involves planning before committing the crime. What intent would an established Doctor have to kill her patient. And that too calling it a planned murder !!!

Question should be asked to police , on what basis did they determine that the Doctors had “planned and wilfully killed” the victim.

They should also be asked, why didn’t they solicit the opinion of a senior Government employed Gynaecologist in this case, before.

Prima facie, it appears to be a infact gross “criminal negligence” by the local police. The police appears to have harassed the Doctor couple by invoking the charges of Murder. This charge is non-bailable offence and the imposition of 302 without any inquiry, without ascertaining any intent, without taking any expert opinion!!!

Dr. Archana Sharma’s suicide ( supreme sacrifice) has the nation boiling. A strict Central law for prevention of violence against Doctors and medical facilities should immediately be passed by the Parliament.

The patients should also demand protection for their Doctors. Otherwise the day is not far away when Doctors would become scarce. It’s in the interest of the society to protect those whom they call ‘second to God.