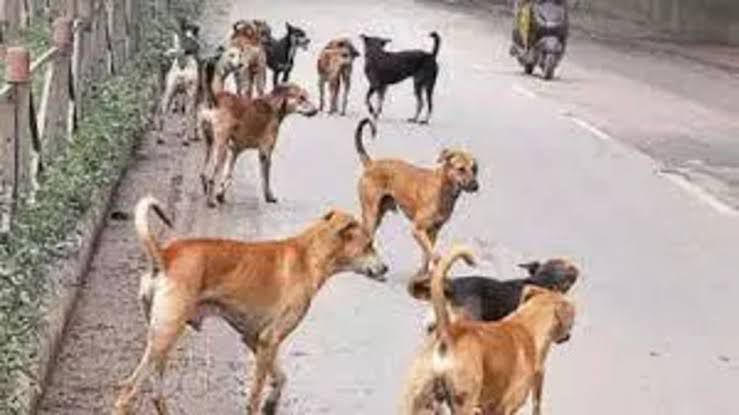 They will be weakened and never overpower you...

Don’t feed the stray thoughts……
They will disappear automatically….

Why did they pass this order, because the population of stray dogs is increased drastically and as they are getting food easily at the public places, they gather there in large number and create the disturbance, menace and havoc in the city.

And the logic applied to tackle the situation may be ; ‘If the stray dogs are not fed in the public places, they will not gather at one place in large number and either disperse in search of food or taken in shelter home to be fed.
Anyway, every effort is being made to control the situation to prevent any untoward events in the society.

I remember the story of Sant Namdev.

Sant Namdev was the great  devotee of Lord Vittala. He  used  to write abhangas; full with devotion; on Lord Vitthala.

One day he was writting the hyms/ abhangas; sitting beside the road of nearby village; so as to avoid the disturbances. He was so engrossed in expressing the Lords devotion that he completely forgot to eat the lunch; his wife has given him – ‘chapati and ghee’.  At that time, people used to carry lunch; tied in a cloth ( shidori) or clothbag. ( there were no airtight hot pot tiffins.)
Suddenly a dog came and hold the chapatis; from the lunch bag; in his mouth and ran away.
Namadeva was filled with thoughts of Lord Vittala. When he watched the dog running with the chapatis in his mouth;  he   immediately took the ghee and ran behind the dog. People who watched Namdev with ghee in his hand, chasing the dog;  were surprised .
The dog ran as fast as it could. Namadeva  too chased it as fast as he could  by calling  _ “Vitthala…Vitthala..”.

Finally  he succeeded in trapping the dog  who was hiding near a bush .
Namdeva very lovingly took the dog on his lap. He applied ghee over the chapatis and started feeding  the dog. While feeding the dog; he was conversing with him_ ” Hey Panduranga! Vitthala !!!  Chapati is dry. If you swallow it without ghee, it will make your throat dry. Please have this chapati with ghee, you can swallow it well. “

He was seeing Pandurang in the dog and loving and feeding him as if his beloved Lord.

Namdeva said with tears in his eyes ‘Oh!  Vittala ! Panduranga!!  Why should you take this form  of a dog for me ?

Lord Panduranga replied, ” My dear Namadeva, I am able and free to take any form I desire. But you are so great… you always recognise  me irrespective of the form I take.”

Sant Namdev, would see God in everything. Such are the evolved souls, who see creation as an extension of themselves and hence are compassionate towards all.

Now, keeping all the sentiments away, just look at the logic used here to control the behaviour of the those who disturbs the society (dogs). The same logic can be applied to avoid the disturbances in our mind.

What disturbs the seekers the most in their sadhana ?
The stray thoughts……!( thoughts without fixed direction or purpose). These stray thoughts create disturbance, menace and havoc in our mind. ( just like the stray dogs do in the society.)

And to solve this problem, we have to apply the same logic of not feeding the stray thoughts…
Starve them so that they will become too weak to overpower you.

Sant Namdeva also never fed the stray thoughts. He fed only the thoughts of Lord vitthala, his beloved God. That’s why he reached at the Highest state.

Opposite of the stray is domesticated/ tamed/pet/owned. One should own the thoughts of the divine and feed them to make them grow strong.

So, how to stop feeding the stray thoughts?

Do not pamper them…
Do not give importance to them…
If at all they come, ignore them…
Don’t get carried away by them….
Try to cut them with the knife of Ramanama….( They use knife to sterilize the dogs…to reduce their numbers.)

They will weaken and you will never get overpowered by them.
They will disappear slowly…from your mind…just like the clouds disappear from the sky….to make it clear….much needed for sadhana.

Most of the people own the good breed dogs…
Who will take care of the stray dogs?

Those like Sant Namdeva, see the whole world as own… without the notion of mine and thine…..
They are taking care of all…as if their own….
We are yet to reach that stage. But to reach that stage, one must do sadhana, where the very idea of not feeding the stray thoughts is very much needed.

Sant Tukaram says; in one of his abhanga-

One who cares those in pain and distress, as if his own, understand that only he is the sadhu( good) and know the God dwelling in him.

Being in medical practice, realised that there is the greater science behind this life science. With full faith in advait vedanta, wish to share the key to happiness and peace I got, with others. Hari Om!