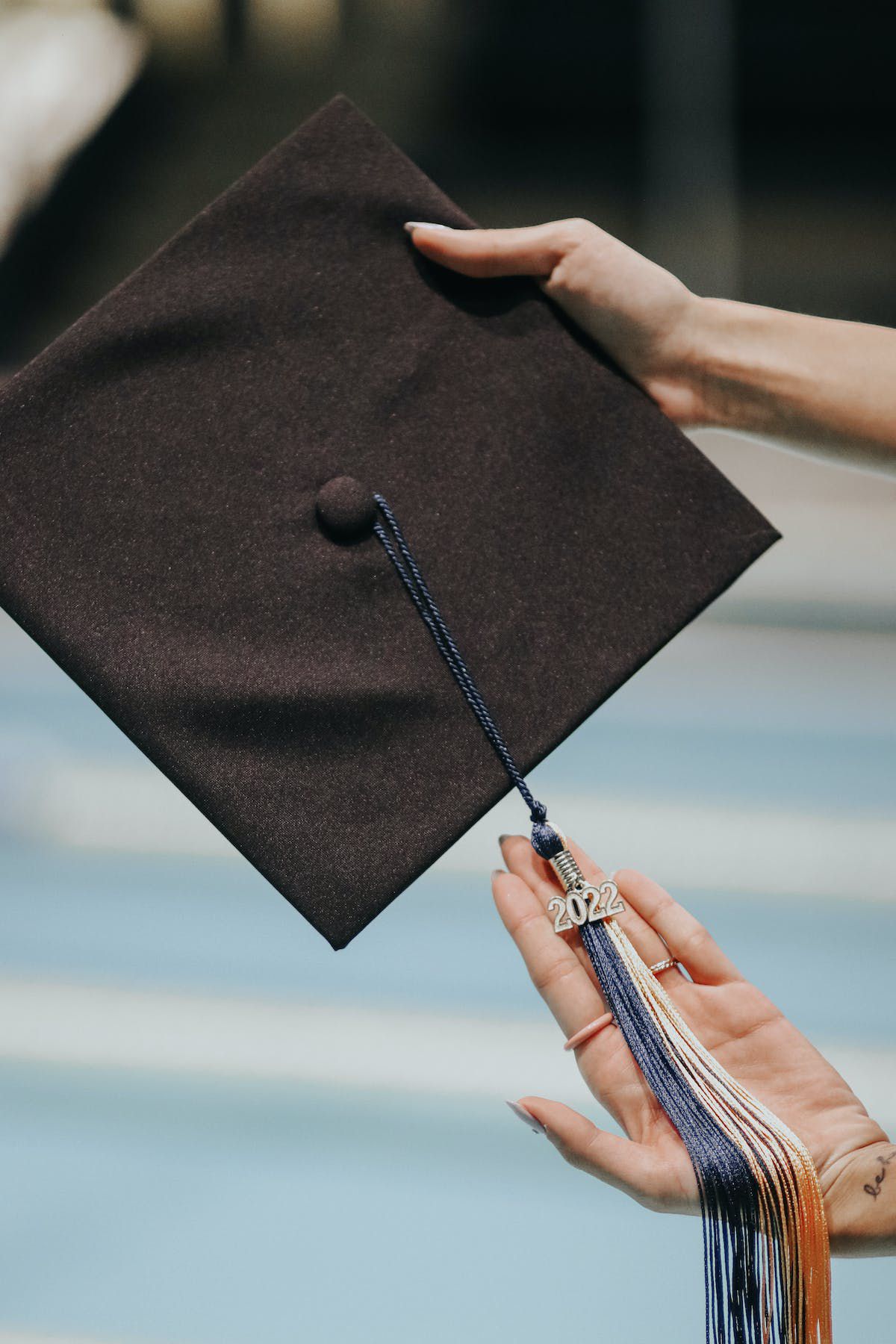 Failed — Against whose Benchmark?

I had failed her... but she had found herself

Tip your hat. Bend at the knee. Turn to your left. Avoid the tangle of the tassel. Smile.

Should I stand up and take a video or take my chance that we will get our monies worth when we finally get all our clips and that the monies paid up delivered the promise? I was saved from the decision, as the creak of the intricately carved heavy door alerted me to the need to look up from the folder I was holding. I had been trying to find her name, recalling her voice that was educating me about the order in which would appear.

The whoosh of the flowing regal gowns. The footfalls of the procession. The scraping of the chairs against the century-old stone floor. The floating notes of the ensemble……the restive crowd had found a reason to get up, as the procession made their way to the stage. More sliding and scraping and the congregation is asked to sit down. As obedient and quiet as the hush of anticipation…the congregation sits down. You would be pardoned in thinking that a great play was being staged.

This was no less.

This was Act Two of the Chapter called “The journey to college” (Read Act 1 here, the action and exposition) of a book called “Curveballs that Life throws at you”. The large screen at the great hall of the University of Sydney flashed her name as she got ready to enact the resolution of the play.

Tipped her hat, bent at her knee, oh oops did she forget to shake hands? Flipped the tassel. A wide smile was followed by a flash of light. She followed the instructions of the Master of ceremonies to the last …. the kind gentleman in the dressing room had adjusted the graduation gown to make sure her gown complemented her carefully cultivated confidence.

The great hall. Magnificent and Colossal, it reminded me of the Westminster Hall at the Palace of Westminster that I visited this summer. “The great hall of the University of Sydney, complete with stained-glass windows, gables, and gargoyles, you will be reminded of Harry Potter and Hogwarts” is how she explained where I must go. This grandeur was a dream and far away on that fateful day in July of 2018. I am reminded of how I felt as I had walked towards the door of our apartment having driven back from work after receiving the news that she had not been able to clear her 12th standard International Baccalaureate examination.

The silence was ricocheting off the walls as I stepped and pushed open the lightly latched door. The1260 square feet house suddenly felt much larger than it was. Despite the thoughtfully chosen heavy Balinese wood furniture that brought to life the intricate Kilim carpets, the living room felt empty. Empty of the character that always welcomed me home. Empty of the warmth and cosiness. It was now filled with cold questions- unanswered and unrelenting. The jury was at its edge.

Who is to blame? Why did she fail her exams? What went wrong? What do we do?

The elder daughter held her sister in a mental embrace, saving her from her father’s rage. She later tells me of stories she has heard in this situation. Protective and paranoid, she had held time, till I arrived. During the 12 km drive from the office– I was conscious of every tree that I passed, every building that felt taller and darker, and every kilometre of the road that has seen the rubber of my bright metallic Mazda3 Sedan speak with it for twenty years. I noticed how time and thought all slow down to a dream-like quality in contrast to the speed of a racing mind when you are desperate for an answer, but it eludes you. From the top right corner of my brain, a throb develops as all eyes turn towards me. The ache spreads and bounces across rooms, meeting the deep silence which is now everywhere and creating a texture of helplessness that I fail to fathom. I hold the silence, serenely placing it in the centre of the room, and the throbbing ebbs.

Suddenly the fog lifts, providing clarity that is soft as silk. There is more than one kind of intelligence- and only one kind of intelligence is assessed as grades on a mark sheet. she learned differently and I learned that she learned differently. The moment of realisation gave me the quiet comfort of knowing how to navigate this equal part deep silence and equal part throbbing noise. It is strange how all the smart analysis and multiple variable executions do not give you the answer that a silent mind does.

Steering her away from the peering accusing eyes, we walk to the room. She slumps and allows her eyes to fill up. An introvert and made of resilient stock, she refrains from letting her emotions show. As she cuddles Pecky- her worn-down stuffed toy and a constant companion, the exhaustion overtakes her. Why drum into her what she already knows? I say to myself and let her be.

Morning arrives and we decide to take a walk to the nearby mall, have her favourite bites… and we write what happened and what we could do to make it better.

The write-up, stark and clear despite the hastily torn ragged-edged ruled sheet, said I had to let go. I HAD TO LET GO. I also read, this time, with my newly acquired reading glasses (what happened to the Pilots6/6 vision I had, that the Ophthalmologist had said? Now I remember what he had remarked causally, that the clearer the far vision, the faster the deterioration of the near vision. Is that what happened here? I need to scribble this in my book of thoughts). Detachment, I had heard, is forced upon us if it is not a conscious choice. I had learned it the hard way.

A 16-year-old set her multiple goals, picked herself up, and depended only on her instincts, capability, and grit. Dad needed to be collaborating with her and needed to acquire that life skill! Four months later, in December of 2018, when results were declared- we all knew. She had cleared her exams and decided she did not go to the United States (a throwback to June 2018. Results had not been declared yet by the board. She had gained admission to a prestigious US college. Tickets were booked, long lists made, and bags packed). She went to the University of Sydney for a subject called International Relations.
When she first told me about it, I thought it was something to do with the world of workers in the manufacturing industry and the labour market. I had confused my study of Industrial relations with her International Relations. Coming from a family of engineers, it was not a subject I had any inkling of. The World wide web came to my rescue. My cheat sheet for anyone who cared to know and asked, was “International relations- How governments interact.” I suddenly feel very smart and intelligent.

Her learning accelerated as she ticked off the carefully manicured to-do list- accommodation, cheapest tickets, and the dance roll that happens as children go to universities. She grew tall, mentally, in a matter of a month. Precisely one month from the day of her examination results, we were on a flight to Sydney. Failure had taught her a life lesson in one sharp moment, that our carefully caricatured and deliberately delivered upbringing had not been able to do in all these years. Today, as she stands in the great hall, with a certificate in hand…It is a degree in life that she has earned.

I place my phone camera back memories of today filed under a folder called “Great Hall.” My eyes are drawn toward the last screen as the phone returns to blackness. Multiple calculations appear that I had scribbled as she had spoken through her grades of the three years of college. A first-class, above-average score through the pandemic and her Covid scare.

She has found her groove. I had failed her, but she had found herself. A breath escapes my tightly pursed lips. It has been there, coiled tight, at the top right corner of my head from that fateful day in 2018.

As we sat in the hotel room, me doing my rapid antigen test to get a Covid negative so I could board my flight home, I smiled at the conversation we just had over a celebratory cake. I had, gently tried to speak with her about her career and the available options. After twenty minutes of a monologue, as I struggle for words, she looks up, touches me gently, and says “Mom, but I like fundraising that I am doing now”

The tiger mom was still lurking deep within. It has no one to feed on anymore and is not the world glad about that!

Footnote:
The year 2050 or thereabouts.
“Mommmm!!!What is Covid?” a shrill voice rings out from my rebellious granddaughter, about to enter college. She has been handed this article from the OS.ME archives by her mother. With the hope that her daughter understands that, failing just means not meeting someone else’s benchmarks. It does not define you.