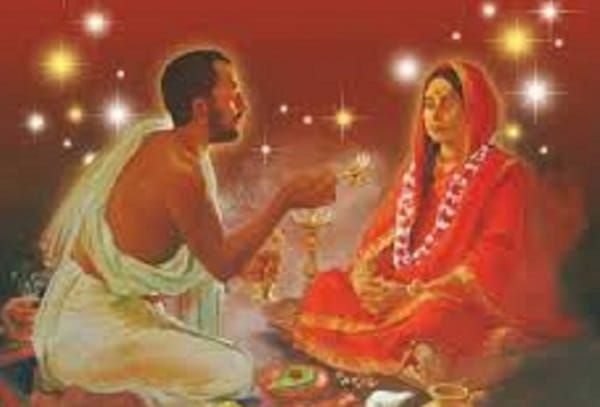 A householder or a renunciate?

What should I call Maa Sharada- a homemaker or a renunciate? Yes, she was married to Ramakrishna but does a mere marriage makes a wife a materialistic housewife? But isn’t being a homemaker or a worldly and materialistic person two different things? Anyway, I will like to tell you about an incident. Once the awesome siddha Shri Ramkrishna Paramhansa asked Maa Sharada whether she got married to him to make him worldly and snatch him away from the spiritual nirvana and bhakti-samadhi that he was experiencing, to which Maa denied, saying that she had come only to assist him in his spiritual endeavors and Sri Ramakrishna was very happy with that response. Both Sri Ramakrishna and Maa Sharada were married in the eyes of the society but in reality, they lived like renunciates, giving all their time for the cause of spirituality, kindness, compassion, help and love. It indeed was Maa Kali’s grace.

But here, another question erupts. Was Maa Sharada a renunciate under the garb of a married lady? Was that all she was? I will say, No. She was a homemaker for the homeless, just like what a guru is for her/his disciples! When the world does not give solace, no material or theory quenches our burning questions, a guru becomes a home for such a devotee from whom the devotee seeks answers, blessings and way forward. The guru becomes an adobe of faith for the lost disciple who in the world might feel homeless and lost despite having four cement walls to live in! With countless devotees thronging around her and calling her ‘Maa’ all the time, she would readily help her children, bless them, kiss them , feed them, love them and the fun fact is, all her children were convinced beyond doubt that they were her favorite. That was the level of unbiased and unbound love she showered upon her children! Only if this society could learn how to be unbiased to rich, poor, high or low! For Maa Sharada, all were one and she bore nothing but good wishes for anyone who came to her. The very persona of purity and humility, she even wished well for the people who had troubled her beyond our imagination and caused her such intense suffering! And yes, we are talking about a person who had no malice for anyone, not a millimeter of revenge existed in her, a person who would unselfishly exude only love and care; And I say that its the beauty of Sanatana Dharma (popularly known as Hinduism). Here divinity is not frozen in time. Sanatana Dharma asserts that each individual can become Jesus-like, Buddha-like or Mahavira-like only if one is ready to put in that level of effort. Sri Ramakrishna was Divine himself, Maa Sharada reached the pinnacle of realization, Om Swami has a divine halo circling him and Chaitanya Mahaprabhu swayed as if Shri Krishna was looking at him continuously!

Shi Ramakrishna had the grace of Maa Sharada as much as Maa Sharada had the grace of Shri Ramakrishna. Their impeccable divinity complemented each other. Shri Ramakrishna had a very sensitive stomach who could not tolerate the regular meals, so, Maa Sharada used to cook for him with love. She would serve him a diet which would suit his health. Towards the end of his life, Sri Ramakrishna called Maa Sharada to him as the new priest of Dakshineshwar Kali Temple had become egoistic and began neglecting Sri Ramakrishna, the very being who had witnessed the grandeur of Maa Kali as she appeared in her full form before him! What a world we live in? The one who bore so much for us, a guru who gave us the path to reach the Mother Divine was left all alone in sheer neglect during his time of need when he was down with so many diseases of his own disciples that he had taken upon himself! At that time, neither a President nor a businessman came for his help but a homemaker-cum-renunciate did- Maa Sharada.

This society has double standards. On one hand it parades a stupid narrative that a housewife is a woman who watches soaps, fights with maids and spends heftily on shopping and on the other hand the same society shares posts about mental-health and circulates statements like- don’t let your inner child die. Bla. Bla. Bla. Nonsense! Obviously, all people are not alike, but double standards are quite visible in the society. As far as my little knowledge knows, Shri Maa dared to sacrifice her career for her own mental-health, her child, her family, her hobbies and her inner calling for spirituality. Here is a person who has changed her lifestyle for things that many glamorize on the internet but instead of claps, she received a statement- ‘you are just a housewife.’ Many people don’t understand her and to be frank, its not important for everyone to understand her. Humans, animals, insects, algae, virus etc. co-exist in an environmental set-up and to which category you belong, you can decide it for yourself. Clearly, everyone can’t have the same consciousness.

Shri Maa is a person who can experience samadhi at will. She even had a vision of the Mother Goddess too. There is so much in her achievement jar that I can never fathom all that. But I can express what is in my heart and for me, both Maa Sharada and Shri Maa are my gateway to spirituality, a window to my soul. They both fought against the social norms, challenged the system, bore the brunt of the blunt-heads and yet they shine with the divine light of the Holy Mother!