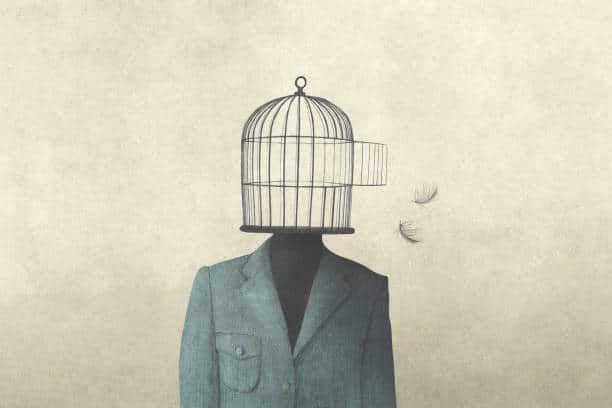 Get Out Of Your Head

In Is The Only Way Out!

Get Out Of Your Head

Om Swamiji, in one of his videos, said that we are manushya because we take ashray (shelter) in man (mind). And it’s veritably so.

We are born as any other animal, without the complexity of thought or emotion. But, as we grow up, along with the physical development, our mental body also develops. And slowly we become a much more psychological entity than an instinctual animal. It’s not for bad that it happens. Without psychological development, a human being cannot be a light to himself. But, human tragedy is, we are miserably trapped in our own heads. And because of that we suffer deeply.

We may think we are free beings, but that is far from the truth. There are worldly as well as psychological traps. And we are terribly entangled in those traps. Aren’t we all trapped in our own thoughts, fears, anxieties and imaginations? We have a whole world of phenomena inside us. So, we inhabit two worlds simultaneously—the inner and the outer world. And we are trapped in these two worlds. But, it is the inner freedom that enables us to move freely in the outer world.

It’s not a hypothesis, but a fact that we are suffering immensely because we are stuck in our heads. So, we have to get out. We have to break free from the whole structure of suffering that none but we ourselves have, out of ignorance, built for ourselves. Yes, the world has an immense role in this. But, we cannot do anything with the world directly. We can only work on ourselves. So, let’s do that.

Mind is not the real perpetrator actually. Mind is the instrument of perception. So, we need mind. The problem is we get trapped in our own stuff—because of ignorance. So, ignorance is the real danger. Ignorance gives birth to all the mischief. As mind becomes more illumined with the radiance of wisdom and truth, the mental darkness slowly fades away. And as we become a more conscious being from a compulsive being, our bondages fall away, and we become more and more free. And with this quintessential freedom from the mind, we settle into peace…like a river that gently flows into the sea. We become a natural, harmonious being. That is a blessed state to be in.

So, how will that be? It’s not that we don’t know. Somehow we all know deeply in our hearts that there is no harmony within us; there is always a restlessness, an agitation deep within our psyche. But, we choose to meander on the surface. We don’t look with deep eyes—what is going on. We barely give the needed attention. Our whole attention is scattered in a million different directions. And we lack the needed energy as well. That’s why we don’t change; that’s why we keep suffering as ever. If we really become determined to sort out everything inside and give the necessary energy to it, I don’t think after that we have to do anything. It’s just that we lack the intense energy and attention. Actually they are not two. Attention is energy! Right now, our attention is not sufficient to penetrate into the mind. We have to gather that energy. Once the focused attention is there, energy naturally follows. That’s why it is said—

After that, it’s only a matter of sustaining that attention until we are transformed. It needs a disciplined life, a conscious way of living. It’s a tremendous task, hard-breaking, to say the least; but, it’s totally worth it in the end. It’s an uphill task, no doubt; but, at the top, the view is also beautiful, no?

And thus, in is the only way out!

Story of Tibetan Buddhist Monk
When Words Are Stuck In Throat