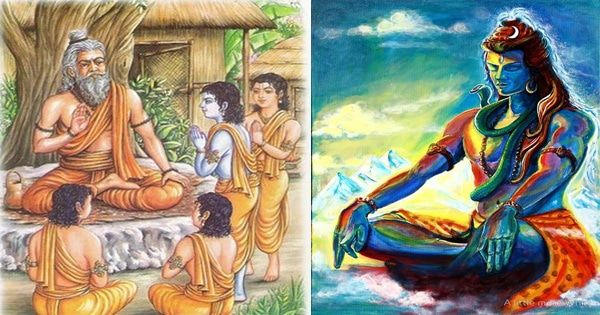 Guru Purnima: From Mahadev and Ved Vyas to Significance of This Spiritual Festival

This Guru Stotra means – ‘Guru is the Representative of Brahma, Vishnu and Shiva. He creates and sustains knowledge. He destroys the weeds of ignorance. I salute the Guru.”

Mahadev was the first Guru of this universe. Come every full moon day in the month of Ashadh, corresponding to July-August of the Gregorian calendar, this sacred day is celebrated as ‘Guru Purnima’. It was Mahadev who first transmitted knowledge of the yogic sciences followed by Rishis (sages), era after era, Age after Age. Mahadev is thus deemed the First Yogi or the first Guru.

Other celebrated Rishis to follow were the Saptarishis (Kashyap, Atri, Vashist, Vishvamitra, Gautam, Jamadagni and Bharadwaj) that finds mention in the Vedas and other Hindu scriptures. How many of you have experienced enlightened faces watching the seven stars of the Big Dipper – constellation in the night sky termed as Saptarishi Mandal by your parents and grandparents when you were children?

‘Guru Purnima’ is dedicated to Maharshi Ved Vyas. Today, Ved Vyas is revered as the greatest Guru of Hindu Dharma. It is because he provided the world with the great knowledge of the scriptures. Till during his times, the Vedas were passed from one generation to another by word of mouth. It was Ved Vyas who compiled them, penned them, and classified them into four parts – Rigveda, Yajurveda, Samaveda and Atharvaveda.

It was because of the contribution by Maharshi Ved Vyas that written texts of the Vedas are available. The Maharshi also authored the Mahabharata (the Rishi uttered and Lord Ganesh penned down the words), Srimad Bhagavatam, and the 18 Purans. He was the teacher of Dattatreya, the Guru of Gurus. Dattatreya, also called Trimurti, was the incarnation of Brahma, Vishnu, and Shiv.

Ved Vyas was born to Matsyagandha Satyavati and Rishi Parashar. He was grandfather to the Kauravas and Pandavas.

Other Significances of ‘Guru Purnima’:

1. For farmers, this day heralds the setting of the monsoon to infuse fresh life to vegetation. It is on this context that farmers celebrate Guru Purnima.

2. Spiritual seekers start their meditation from this day.

3. Many a spiritual seeker begin their spiritual lessons from this day.

Without a teacher to guide, a person is equivalent to being blind. The mother is the first teacher of a child. It is from the mother that the child learns the first lessons of life in all aspects. He then learns from his surroundings. The Guru then becomes his next teacher. In today’s context, it may mean not only teachers from school who have positively impacted towards the growth of the person to take the challenges of life as it comes but also those who teach one to stay unaffected from the negative effects of material miseries.

Guru is the dispeller of darkness, of ignorance, leading aspirants towards the path to illumination, of enlightenment. In the present day context, our Guru represents our teachers, spiritual Gurus, our parents, our friends, our brothers and sisters, our neighbors, and anyone who has taught us something to better our lives.