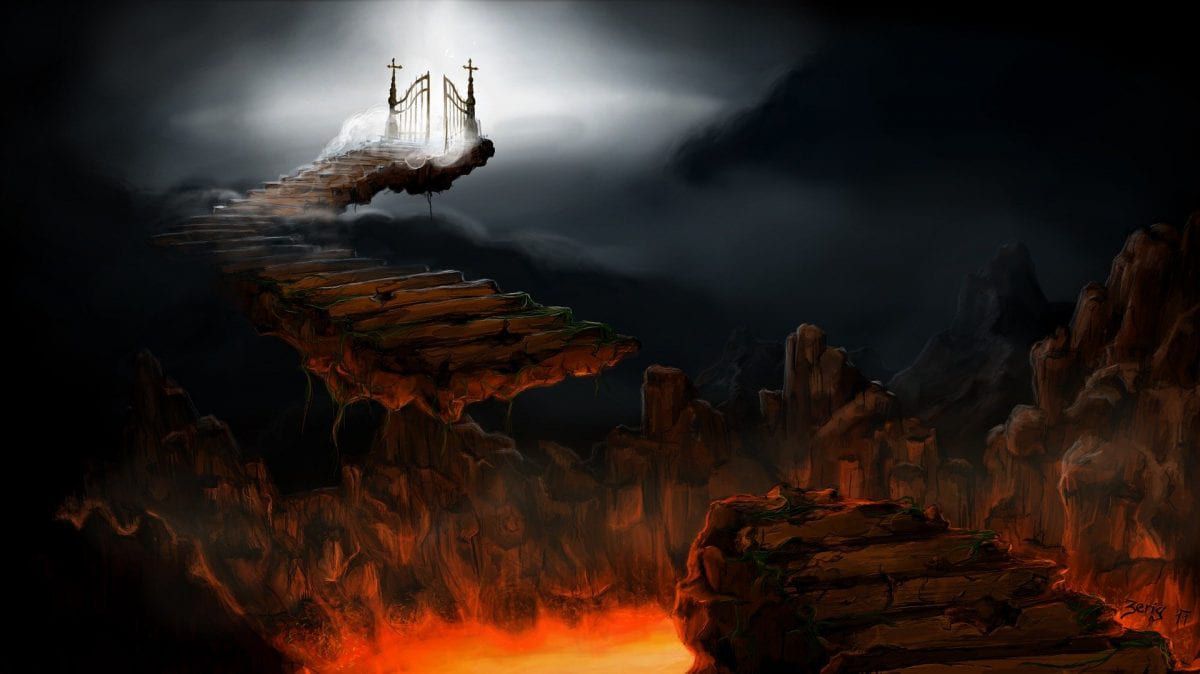 Heaven and Hell Exist on Earth – We Have a Choice

Have you been to hell before? I’ve been many times. Yes, there are ferocious demons that live there, and the seething heat scorches instantly. I don’t believe in hell or heaven after death, but that we create both of them here on earth. The journey to hell is lightening fast.  Why?  Because the mind travels even faster than the speed of light.  Self-esteem and feelings of peace get torn to shreds by these demons that inhabit that sphere of consciousness.

The Agni Purana text describes many kinds of hell; the following description seemed to describe well the one I have visited: Kakola or black poison, the bottomless pit, for those who are eternally condemned to hell and have no chance of reincarnation.

Often, I’d be having a fine day and feeling good when all of a sudden, I’d be struck with a thought that turns into a train and whisks me along, whether I want to or not, to the underworld.  Swamiji calls this “The Tearing Thought” (a term from The Yoga of Kashmir Shaivism by Swami Shankarananda). Nothing about your circumstances has changed; no one did anything to you; everything is as it was, except for your internal experience.

For me, these thoughts would grow quickly and had the gravitational pull like that of a black hole.  Resistance was futile, and there seemed to be no choice of whether I would enter this pit of hell.  It was inevitable that once these thoughts entered my mental canvas, I was doomed to go deeper and deeper.

I used to think that I could somehow come out the other side of this black hole of thoughts and that there existed some sequence of words I could say to myself that would set me free and allow me some relief from the feelings of jealousy, hatred, shame, and resentment that accompany a trip to hell.  I fantasized that there were magical or special words that, when spoken, would act like a key, and would set me free.  For instance, “the key to your heart” is when you tell someone your true feelings, that you love them, and it unlocks their hearts.  I thought there was a door out of hell too, and that I just needed to find the key.

I would spend days on end searching for a way out of this hellscape.  I never found those words, and these episodes would get so bad that I would sometimes turn to drugs to numb the pain, and though I knew I would never do it, suicide was often a comforting thought as I knew it was a surefire way to end the suffering.

I think the substance of the tearing thought that disturbs us is unimportant because there are innumerable ways we can get sucked into negativity.  There is a way out of this hell, and what I’ve learned through the practice of mindfulness, following Swamiji’s teachings and the Black Lotus app, is so beautiful it’s like a miracle.  If you turn away from this black hole of negativity and turn towards the light, this demonic force that seemed irresistibly strong starts to get smaller and smaller.  It still has a pull and has not become feeble, but with practice, I know it will.

Psychotherapy certainly helped me uncover why certain trains of thought were experienced more as tearing thoughts than others. You can read about me how therapy helped me here.  In short, I dug deep where needed and uncovered some psychological scars that needed some airing out.

Over the past three years, I’ve been exercising my mind with meditation and following the golden rule of meditation, which I first learned about in Om Swami’s book, “A million thoughts.” It states, “you cannot not think about something by thinking about it.”

I believe this is why Swamiji tells us that if we are feeling negative to do something creative, otherwise, if we brood, we just become more resentful and negative.  If we are creative, we are in a state of positivity.

Initially, I thought this was kind of anti-climactic because I was very much looking forward to descending into hell and cleaving those demons in half someday.  I always had the conviction that my soul was untarnished by these thoughts and feelings, and that someday I would conquer them. It turns out I was right, but the method was different than I imagined, and more powerful than I thought.

Mindfulness is being aware of when these tearing thoughts first arise and not entering that demonic realm in the first place.  Therein lies the anti-climactic part for me: if I don’t enter where they dwell, then I do not get the satisfaction of obliterating these demons face-to-face. Yet, I’m beginning to see how a razor-sharp level of mindfulness, honed through one-pointed concentrative meditation, is the most deadly weapon of all which no demon can withstand.

In the past, as these thoughts took over, demons of jealousy, anger, shame, and resentment would tear at my being, shredding my self-worth and wrecking not only my day but those around me as well. A few years ago, I would have no control over whether I followed these thoughts into the maze of hell.  Their gravitational pull was just too strong.  It was like a black hole suddenly just appeared in front of me, and there was just no choice in the matter. I got sucked in, no matter what.  As the intensity of the experience increased, sometimes I would even have a flight or fight response as my body perceived a threat from this intense pain, and the blood would leave my face, turning me pale.

Sometimes the only solution seemed like suicide.  It was a comforting thought at the time that at least I knew of one solution that would absolutely and permanently put an end to the pain.

I really cannot overstate the positive impact that mindfulness has had on my life. It’s been nothing short of miraculous. It’s not to say that these thoughts are not a challenge for me anymore, because they are. Even writing this blog has been hard.

Stating that I’ve made progress leads to feelings of doubt, and I almost goad myself to test whether it’s really true by purposefully bringing those negative thoughts into my consciousness to see how I handle it.  I passed the test, and it is true: the severity, frequency, and duration of these episodes has diminished a great deal.  Whereas before I might have been stuck in one of these realms for days, now there are just a few moments of intense concentration as I keep shifting my focus away from these thoughts to something more constructive.

Usually, I turn my attention to doing some exercise or going for a walk or listening to music.  Swamiji has said many times that when we are feeling negative, we should turn our energies to some creative outlet. Sitting and stewing over the issue will just create suffering and remember the golden rule of mediation?   We cannot, not think about something by thinking about it.

Just as hell is on earth, so is heaven.  Feelings of gratitude sometimes bubble and spill over as I count my blessings and feel the lightness in my being.  These feelings of lightness wash over me, and I feel as light as a feather, like I could float away.  With fewer chains holding me down and the mindfulness to ward off the few remaining marauding demons, I’m able to enjoy longer stretches of harmony, contentment, and other positive emotions in my life.

Initially, it was hard for me to understand what meditation was doing to me and what benefits it was providing.  Over the last three years, I’ve devoted approximately 900 hours to meditation, and gaining control of these tearing thoughts has been the most precious jewel I’ve found so far.  I will cherish it forever.

If someone had told me I could have $10,000,000 but that I would have to live with these thoughts and feelings forever or, If I forego the money, I could gain control of them, I would not think twice: I’d take the money.  Just kidding, no amount of money can buy peace. The Black Lotus app has been my constant companion on this journey, and every single one of those 900 hours has been logged through the app. It’s a place where I can go online where I know I will find positivity and a community of other meditators who are progressing on the spiritual path while also helping those around them.

It has given me immeasurable benefits, and to be honest, I’m aware that I’m at the beginning of the journey. I am so very much looking forward to what’s next.