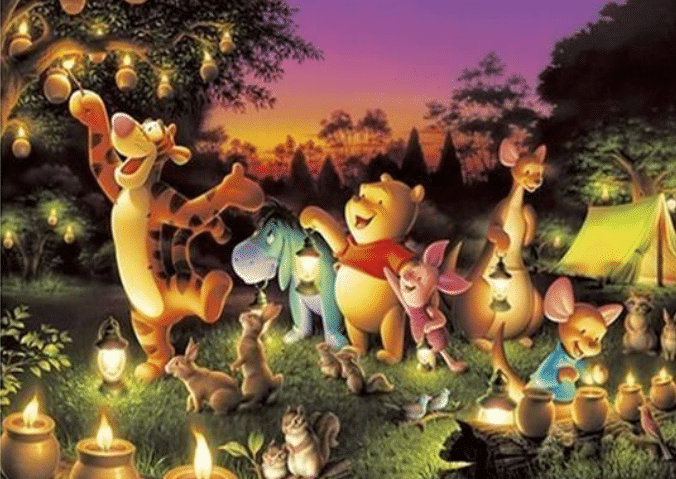 The episode begins where Rabbit is planning to harvest his cabbage and Tigger comes bouncing and mess his plan. Rabbit being irritated by Tiggers bouncing planned to teach him a lesson and tricked him. Rabbit took Tigger to a tall cliff and said that the best bouncers in the world can bounce over it in just one bounce.

Tigger tried to do so but failed after trying a lot then he returned to Rabbit and asked him to teach how to bounce over the cliff with one go. Rabbit taking the opportunity bragged that he is related to the awesome bunny of Upsadesia who is the best bouncer in the world . He secretly planned with Goofer and showed Tigger his bouncing skills with the shoes of the awesome bunny.

Tigger being impressed with Rabbits bouncing skills asked Rabbit to give him those shoes. Rabbit added some weights to the sole and gave to Tigger so that Tigger could never bounce again. Tigger found it difficult to walk in those shoes but still kept practicing.

Pooh bear and Piglet saw this and said him that these shoes are holding him down. But Tigger said that those shoes belonged to the best bouncer of the world and was given by Rabbit to him to help him bounce.

Tigger was exhausted while practicing and Rabbit saw this and got sympathetic. While Tigger was sleeping Rabbit went into his home and tried to take those shoes but Tigger bounced out from his bed and sleep bounced ( don’t know if that’s a word) all along Pooh and Piglets home and dozed again in his bed. Piglet and Pooh thought it’s the awesome bunny who is back to take his shoes from Tigger and rushed to Tigger to inform him about this. Tigger heard this and said that he is not giving those shoes before he has learned to bounce over the cliff with one go.

Next morning Tigger practice his bouncing again wearing those heavy shoes and everyone said him he is not going any farther wearing those shoes. This night Pooh, Piglet and Rabbit came to guard Triggers home and while everyone were asleep Rabbit untied Tigger shoes from his feet to throw away meanwhile Tigger sleep bounced again to the cliff and Pooh and Piglet woke up and thought the awesome bunny had kidnapped Tigger and took away his shoes and they followed the bouncing bunny (Tigger) .

They arrived near the cliff and saw that there was no awesome bunny and it was only Tigger who had sleep bounced to the tall cliff and was sleeping there. They called him to wake up. He woke and was surprised to see himself over the cliff and asked how he was able to bounce over the cliff. Rabbit said the awesome bunny carried him there and he took away his shoes too ( meanwhile he throws those shoes into a hole which was Goofer’s house). Goofer came and revealed there was no awesome bunny and Rabbit made all those up and also invented those shoes .

Tigger was shocked and said: You put all those weights on my footies. Bunny oh Bunny you know those shoes would build up my muscles and thanks to you I am the best bouncer in the whole world.

Rabbit: Then you forgive me 😱😱

Tigger:Forgive. Next thing tomorrow morning you are gonna help me practice for my next bounce.

Tigger: Yes I heard about this cow that jumped over the moon.Listen Triggers can’t let cows be the best jumper.

1. WHEN LIFE GETS TOUGH REMIND YOURSELF THAT IT’S JUST HELPING YOU BUILD YOUR MUSCLES: Just like Tigger did he was not mad at Rabbit instead he thanked him for giving those shoes with added weights. So whenever we have difficult times we can all remind ourself that this is just gonna make me evolve as a better person.

Tough times teaches us so much help us be aware of our strength and also helps to build more resilience. It also teaches us to be more humble and brings us closer to people who really care.So rather than being annoyed about those situations we can be grateful for those tough times just like Tigger.

Thats all for today.

A Dream. A Vision?
how to overcome frustration ?