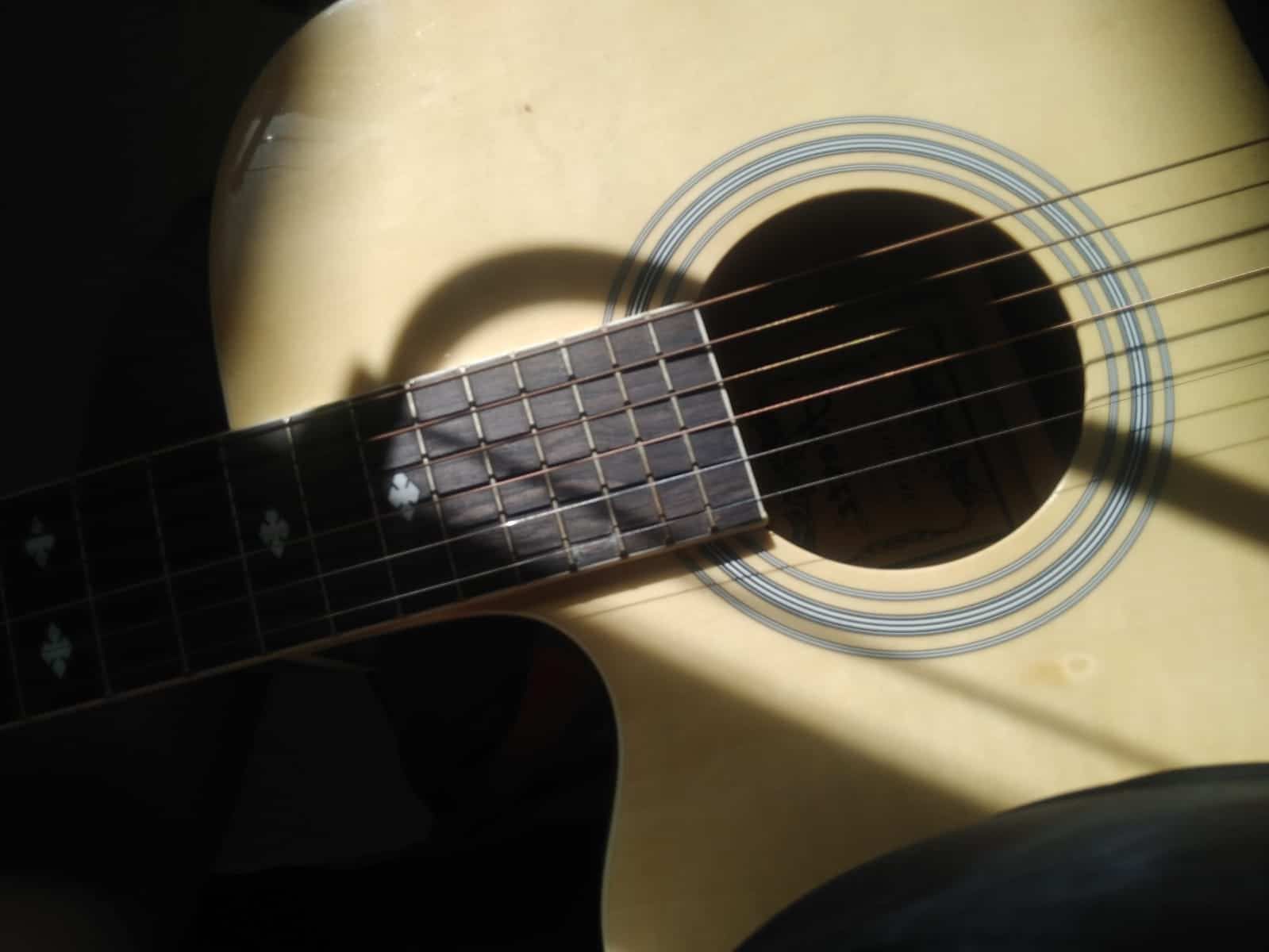 Everyone hides secrets. Even a guitar, perhaps. #TheWriteChoice

A soft hiss escaped the girl’s mouth as did a sound worthy to be called music from the guitar’s beautiful body, blackened with age and experience. Her soft, pink cheeks were flushed with a subtle pink, a colour that the usually unkind cold had been kind enough to provide to her.
To one uninterested in the happenings behind the small glass window tucked into the line of shops along the street, a casual glance would probably suggest that a girl, out of sheer excitement, had stepped inside to examine the large variety of guitars lying soullessly along the dirty walls. After all, the sweet wooden smell would be a source of attraction not just to children but also the romantic passerby looking for a new tune to slip into their songbook or a poet looking for a thought to magically convert into ink.

But the girl was not one to fit into the categorise that one would normally guess, as was the guitar she held.

Guitars are usually regarded as fine producers of sound, a source of pleasure to one’s ears, although it did depend on they who made the guitar whisper. A guitar has a stubbornness not found in even the most stubborn members of Generation Z. Press on its strings gently, it refuses to be tamed and lets you know so by a light sound. Press harder, and it protests ever so loudly. Play it, and it shall play. But it refuses, once again, to be a servant to a master, its sound echoing still even a few seconds after you’re done plucking the strings.

But that guitar, no one ever bothers to see, was also a listener and observer- perhaps even a secret one. The girl did.

That guitar was a world of its own- causing joy unparalleled to some in their ears, pain unbearable to others’ fingers. One would not know, the criminality that guitar hid behind its musical facade- bleeding fingers to dreaming guitarists, broken dreams to many. Leaving hearts shattered ever so indifferently- still singing merrily in spite of its master’s broken heart, or hearts broken by family members tragically leaving for a world beyond the current one, which takes two roads- heaven or hell, leaving not much behind, either- metallic, rusty strings, tied onto a black, tired body tightly and painfully- for that is the only way to make it scream, which is all that others wish to listen.

The girl stared at the guitar as it echoed the note she played, causing in her fingers a numbness and in her mind a thousand thoughts about the sweetness, like hot chocolate, of its sound, for a second hypnotised- then hating herself for allowing herself to believe in outer beauty and assumptions. How could she?

No one is they way they appear to be. No one at all. Especially not what lay in front of her- an apparent guitar. Her pink cheeks seemed to go red, as anger does to many. Anger unparalleled travelled through her veins, untamed and beastly. Her hands twitched.

The window light streamed in like strands of gossamer thread, and a woman with a complexion brighter still paused right outside the shop window. She casually glanced at it, and not finding anything of interest, glared at the streets for being so melancholic in her favourite seasons, before her phone, reminding her of its feeble existence sang in her pocket. She rolled her eyes as her long, slim fingers dug deeper into her pockets, unable to find her phone, and upon finally grabbing the scandalously disappearing criminal, quickly but nonchalantly tapped on a reply to the text notification she had received.

As soon as she was done, she put it back in, and decided her beauty was far too much to be put down by a messy overcoat, that too because of a light box she had been unable to find seconds before. Slowly, she turned to the glass to correct her look- it mist remain flawless. She looked into the window and pouted. Suddenly, her lipstick fell onto the ground, smearing blood-red onto the sparkling snow.

Because beyond her shocked expression lay in the glass, a guitar. Strings cut. Deep crevices on its black body. And,
A girl lying next to it. Unconscious.

A/N: A berry, Merry Christmas to all the beautiful people who took out a few minutes to read this blog of mine, just little collections of loops we call words that formed in my mind like a child’s wishes on Christmas Eve.
I’m sorry if this story seems to make absolutely no sense- honestly, it isn’t supposed to. What I basically want to convey is, although we classify things as obvious or not, they aren’t ever either way. There’s always a probability of the opposite happening, however small it may be, and the human mind is conditioned to immediately figure out what may be happening in a particular circumstance.
For example, the girl in the end may very well not be unconscious- could she not be pretending? And who knows whether it is really the girl who damaged the guitar? And who knows what she truly is doing there!
Could the lady outside the shop not be hallucinating about what she saw?
Did you even just read something written by me, or read something at all? Could you not be in a dream?
Life will leave you many, many unexplained things, but don’t let them bother you. Even the most wise and respected couldn’t understand all- none could understand Him truly, but in the end, nothing is purer or truer than Him. Although I don’t have a lot of wisdom as a 14 year old, I will say this- there is no point being anxious about the future or the past or making predictions for the future about the consequences of your past.
I’d like to end this little lecture, albeit a boring one, with a little quote, my favourite.
“Don’t worry about the could haves. If it should have, it would have.”

I sincerely hope you had and have an amazing Christmas and may each day of yours be a present wrapped in golden foil! Much love, and thank you so much for reading my musings, it means a lot to me! Jai Sri Hari! 🎄

P.S: Featured Image Credits: My very talented photographer friend, Drishti Bhardwaj! Thanks a lot for allowing your annoying friend to steal this for her blog, you amazing idiot. 🙃