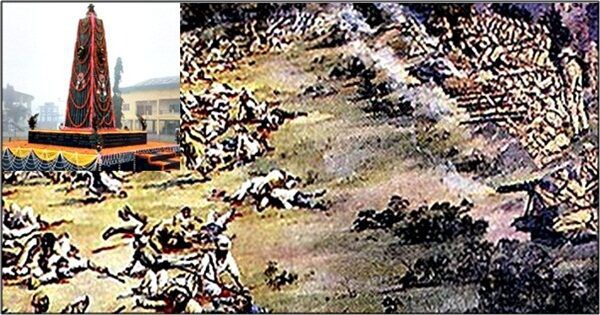 Patharughat! This town located in the Darrang district of Assam mutely narrates an incident from 1894. Thousands of peasants assembled as a mark of protest against the colonial rule. Around 140 peasant freedom fighters were massacred here by the British. It was January 28. Locals remember the incident as Patharughatar Ran, meaning Battle of Patharughat. This place is also known as Assam’s Jallianwala Bagh. But Patharughat massacre, one of the most brutal and merciless of British actions against the natives in the history of India, took place 25 years before the Jallianwala Bagh massacre. The Swahid Stambha, a martyrs’ column, stands at the place where the massacre took place.

To quote from an October 2010 Indian Express report on a book on 1894 Patharughat massacre of Assam by Arup Kumar Dutta, an author of 30 more books on the history of Assam, ‘”The massacre at Patharughat in Darrang district in Assam was one of the most tragic yet inspiring episodes in the saga of the Indian freedom movement. It was also a precursor of many subsequent acts of mass murder by the British during the freedom struggle, such as the Jallianwala Bagh killings…. Official records, as mentioned in the Darrang District Gazette, 1905, edited by BC Allen placed the casualties in the Patharughat incident as 15 killed and 37 wounded. But unofficial accounts claim that score were killed and hundreds wounded,” Dutta said, referring to various sources including local ballads that are still sung by the people in Darrang.’

With the Burmese raiding parts of Assam, Manipur, and Arakan, the first Anglo-Burmese War took place in 1824 that continued till 1826 with a victory by the British. It was after the Treaty of Yandaboo of 1826, a peace pact signed between Gen Campbell representing British and Maha Min Hla Kyaw Htin from Burma, that led to an end of this war. But while signing the peace treaty, consent of local chiefs of the Northeast was not taken into account. In the name of the terms and conditions of the treaty, the British cleverly extended their jurisdiction to major parts of Manipur, Assam, and Tripura. By the 1830s, they set up tea plantations in these regions. The British gradually started interfering into the affairs of the other regions of the Northeast, as they did across the country.

Ryotwari, a land revenue system, which also included features implemented by the Mughals, was introduced by the British in areas where they ruled. This system was applicable to farmers and the land revenue was imposed directly on the farmers, termed ryots. Ryotwari system was first administered in the Baramahal area of Mysore by British Captain Alexander Read. It was then introduced by Thomas Munro, the Governor of Madras Presidency, in 1820 and implemented in Madras, Bombay, parts of Assam and Coorg provinces followed by other parts of the country. In this land revenue collection system, the revenue rates were fixed at 50 percent for dry farmlands and 60 percent for irrigated lands initially. Soon, because of the excessive taxes imposed, economic condition of the farmers deteriorated. Furthermore, taxes were frequently increased. British confiscated the lands of those who could not pay the revenues. The taxation system of the British thus impoverished the farmers.

In Assam, British first made surveys of the lands. Based on the survey, taxes were imposed. Here the British increased the land revenue by 70 to 80 percent. Moreover, the people of Assam did not like the British interfering in administrative affairs and occupying the motherland. Farmers and the general people started gathering in groups, discussing about revolting against the British the big way.

On January 28, 1894, thousands of farmers from several villages assembled at Patharughat. Many were armed with sticks, all ready to strike and defend if a situation of a battle arose. There was no leadership and the peasants organized themselves for the revolt. Here they decided not to pay any taxes thenceforth to the British if the latter refused a reduction.

During this time, JD Anderson was the district magistrate of Darrang region. He arrived at Patharughat with a huge police force along with Barrington, the superintendent of police and Remington, the sub divisional officer. They ordered the farmers to disperse and warned them of dire consequences. The farmers paid no heed to the warnings. They raised slogans and demanded reduction of taxes. The British officers refused to meet their demands and further warned them to leave the place.

When the farmers continued their protests, the British opened fire. The peasant freedom fighters offered resistance with their sticks, attacking the British police forces. But their sticks were no match to the guns used by the enemies. 140 farmers attained martyrdom and hundreds were wounded.

Patharughat massacre has been hushed up in the pages of history. The British left behind little archival material on this massacre and whatever little material is available is distorted with casualties placed at less than a score. Local historical ballads that are still sung in the Darrang region including other sources claim the massacred peasant freedom fighters at 140. It is not only history textbooks, but also mainstream media that has completely ignored this sacrifice of peasants in the northeastern part of the country.

When will truth be told to the rest of India?