The man who individualised spirituality 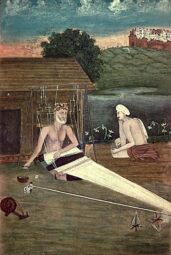 Kabir with his disciple (Wikimedia Commons)

In the wee hours of the morning in Kashi, a Brahmin was scurrying down an alley to reach the Ganga ghat. It was still quite dark; the bird song had not yet broken. With no city lights to show the way, the Brahmin had to rely upon his expertise and memory. Years of routine had imprinted the path in his mind. Every day before the sunrise, he would walk through the circuitous streets of the sleepy city. As usual, he passed by mansions, huts, makeshift shops and strode purposefully towards the ghat, where the city burst out of its narrowness to embrace the silvery expanse of the river. While descending the stairs in a hurry, his foot struck a human form. “Ram, Ram, Ram, Ram”, the mental chant manifested in his words as he stepped back in horror. The man he had stumbled upon got up at once, touched the Brahmin’s feet in a swift move, folded his hands in a namaskar, and left.

Did the Brahmin catch an enigmatic smile on the man’s face? Had he been sleeping or lying there on purpose? Brushing the thoughts aside, the Brahmin walked towards the river for his morning ablutions.

Bhakti Saints of the 15th-16th Century

This is how the 15th Century Indian mystic, poet and saint Kabir met his master, Guru Ramananda. You will find variations of the same anecdote across different sects. There are as many tales as there are tellers. Kabir’s brief meeting with Ramananda was enough to get the Guru Mantra he had been pining for: Ram.

Ramananda was a Hindu Vaishnav saint and quite liberal in thought compared to the other masters of the era. He had broken away from the ‘conservative Brahminical Sri Vaishnava Sect and used Deshbhasha (local language) as his medium of expression.’ (Agrawal, 76).

India in the 15th century was fractured by differences in caste, creed, and religion. Sadly, the same vices confront the country even today.

Born into a Muslim family, Kabir couldn’t approach Guru Ramananda. Ironically though, many mystics and saints such as Kabir (hailing from a weaving community) and Ravidas (a Dalit spiritual master) cut through these societal differences and became venerated saints for many generations of seekers. They were held in high regard by many kings and royalty. While Kabir was revered in the works of Bhagat Pipa, a Rajput king, Ravidas or Raidas, was the Guru of Mirabai. Initially seen as a rebel and rabble-rouser, people took time to appreciate Kabir’s style of spirituality, which was stripped of all ritualism and ostentation.

After a well-planned encounter with Ramananda at the ghat, Kabir went on with his spiritual practices. He revered Ramananda and claimed to be his disciple. The news of a Muslim weaver having a Vaishnav master caused quite a stir in the town. Ramananda called Kabir for a meeting. Speaking from behind a curtain that separated him and Kabir, Ramananda questioned why Kabir was spreading lies about him. He had never given any Guru mantra to Kabir.

Kabir responded by saying that just a touch of the spiritual master was enough for him. He claimed confidently that the word ‘Ram’ — uttered by Ramananda inadvertently — was Kabir’s initiation. Elated with Kabir’s answer, Saint Ramananda stepped out of the curtain and hugged Kabir, calling him a worthy disciple. Till today, Kabir is venerated in the Ramanandi Sampradaya along with Ravidas. This anecdote also illustrates the beautiful bond between a Guru and disciple where both learn from each other. (Agrawal, p.78)

In the Indian tradition, the Guru-shishya relationship holds a coveted place. Whenever you seek to learn from a master (be it art, music, education or spiritual practice), you need to empty yourself and cultivate the humility to receive. Throughout his life, Kabir wrote numerous dohas (couplets), padas and sakhis. In many of them, he extolled the glories of his Guru. You may listen to some of the dohas in the following video. 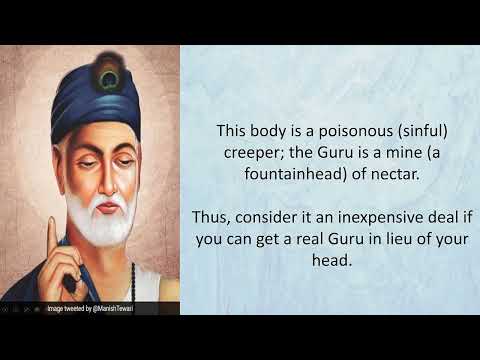 Even if I use the entire land for paper and make a pen from all the wood in the forests.

If all the water of the seven seas I use for ink, I cannot write the glories of the Guru still.

This body is a poisonous (sinful) creeper; the Guru is a mine (a fountainhead) of nectar.

Thus, consider it an inexpensive deal if you can get a real Guru in lieu of your head.

Blind are those people who cannot understand the importance of a Guru.

If God is displeased, one can find refuge (salvation) in Guru; there’s no recourse if one’s Guru gets upset.

Kabir likens the presence of his Guru to that of a rain-laden cloud. He claims that his master’s grace and love have drenched him. His very being, his soul, has got soaked in joy. He feels nurtured like a forest that becomes green on receiving rain.
Here’s a lovely song based on this couplet by the famous folk singer from the Malwa region of India, Kaluram Bamaniya. 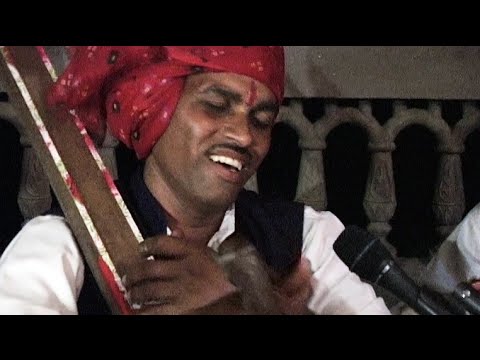 Kabir made his Guru mantra — Ram — a living reality. His life is a testament to the search for Ram within and without. Rejecting scriptural diktats and rituals, he advised constant self-purification as the way to self-realisation or ‘Ram’. More about that in the next post.