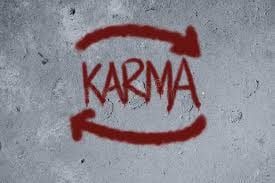 Karma and Its Consequences

Every karma has it consequences...realizations strikes when we experience the results instantaneously!

Our Karma and its Consequences

Reena and Arya were both returning from a trip to the mall. Reena was driving and Arya was sitting in the back with her 18-month-old son Vivan. Reena and Arya had both come from India to the US along with their husbands who were colleagues. They lived in the same community and were fast friends.

Arya was sitting with Vivan in the back as he was creating a ruckus in the baby seat, he was not used to being strapped in the car.

Reena and Arya were chatting in the car. Reena was telling Arya about a friend Prerna with whom she had gone shopping a week ago. Prerna was driving at the time and had a made blunder while changing lanes, Reena was laughing over her mistake and being critical. Just then many things happened at once…

Reena had taken a left turn at a junction (the US drives on the right-hand side of the road). As they went further up the road, they saw a car coming towards them in the opposite direction at full speed.

Reena was baffled initially but realization struck her that she had taken a left turn instead of right, and was now in the opposite lane,  fear gripped her. Alarmed she immediately applied brakes and started taking a full speed reverse. The car raced back but started climbing the road divider. Reena had no idea as she was concentrated on the car ahead. Arya in the back seat realized this and started panicking.

In the meanwhile, the car ahead was now closer. The opposite driver (God bless his kind-hearted soul) realized what had happened he slowed his car and waved a friendly hand at Reena indicating her to stop. His kind action helped Reena calm down, she stopped the car and took some deep breaths. With Arya’s guidance Reena got the car  down made a U turn and was on the right lane.

After travelling for a while, they both relaxed. Arya realized that during the incident Vivan had stopped wailing and was sitting quietly. Toddlers too pick up vibrations of fear and panic!

Reena now felt guilty and recalled how moments before she had been critical of Leena’s driving. She was penitent and sorry about her action. She had reaped the fruit of her Karma.

In her case the consequences of her karma had been instantaneous making her realize her mistake. But many a times the fruits of our karma are delayed. Unawares we do not realize when we criticize, judge or blame others.

Arya smiled and consoled Reena. It was a lesson for her too!