The night before yesterday, I went to a kirtan. I hope all of you are familiar with that word.

But for those who need a little introduction, here is it. ‘Kirtan’ is the practice of chanting and dancing on the holy names of God. Few men and women, called ‘kirtaniya’s, chant Hare Krishna Mahamantra over and over again. Khol (a traditional drum), kartal (cymbals) and harmonium accompany the chanting. This chanting goes on 24/7, for one, two or three days continuously. The event is organized for ashta-prahar, shola-prahar or chaubish-prahar. Ashta-prahar is one day. So, shola-prahar is two days and chaubish-prahar three days.

This name-chanting is called naam-sankirtan. After that, leela-kirtan starts, where the kirtaniyas enact different leelas (divine plays) from Sri Krishna’s life. At last, the most awaited spectacle that happens—usually around the last phase of the night, that is, around the brahma-kal or dwan time—is raas. The raas-leela that Sri Krishna used to perform with the gopas and gopis in the deep groves of Vrindavan. It was the most ecstatic dance that ever happened in this existence. So much so that even Shiva, the ultimate Yogi who remains absorbed in the highest state of bliss always, couldn’t resist joining this raas-leela. He came down from Kailash to partake in this ecstatically blissful dance, but was not allowed! The river goddess, perhaps Yamuna Devi, stopped Him saying, “You cannot go. No man is allowed in Krishna’s Leela. Here, Sri Krishna is the only Male. The ultimate Personality of Masculinity! If you wish to go, you have to become a female.” Shiva is regarded as the ultimate Personality of the Masculine Energy. But, here is the demonstration of His ultimate nature: He is also ardha-nari. He embodies both the masculine and the feminine principle. So, Shiva willingly transformed Himself into a gopi. Or the lore says, He put on a gopi’s clothes which Yamuna Devi provided. Anyway, the point is, nobody can escape this blissful union with Krishna. Not even Shiva!

On the night of the raas-leela, one of the kirtaniyas dresses up as Krishna, while others become His gopis and gopas. They sing, dance and swirl around Sri Krishna in an ecstatic mood. And the audience remains spellbound.

People, child and old, men and women, throng in large numbers in kirtan. A kind of village fair starts these days.

Bengal has a long history and tradition of kirtan. It is believed that Lord Sri Chaitanya Mahaprabhu first started this naam-sankirtan in Nabadwip. Ever since, practically throughout the year, and especially in Baisakh (April-May), which is regarded as the dharma-maas (the month of dharma), kirtan events are held in every part of Bengal, mostly in villages. This is one thing that city people can’t see in cities, unless they visit some ISKCON center or seek out such events. This tradition is embedded in Bengal’s spiritual conscience.

This place where I went is very close to our home. And this village is populated by the Haldar community. It’s their surname. They are simple folks, who run small shops and do hawkery or sell their home-made things. But one must see their enthusiasm and spirit during these three or four days. They organize this event once a year with all their heart. Literally everyone from every house comes and joins this event. It’s a small village, but for these few days, it gets crowded with people who come from other near and far villages. And one can easily feel a certain devotion in the air!

One thing which is a must to experience is the aarti (the fire puja) and the hari-loot. I’m not sure if the latter happens in other places or not, but in Bengal’s villages, hari-loot is a custom. It means Sri Hari’s Charity. Those who offer batasa (a kind of white round sugary sweet) to the puja altar, later distribute it among everybody. But, by throwing! Yes, it may seem odd, but it’s like the rain of batasa. One would see batasa flying in every direction, and people are crazy to catch and pick up some. I took some snapshots and made a video. But, the video is not supporting here. So, sorry. Here are some glimpses: 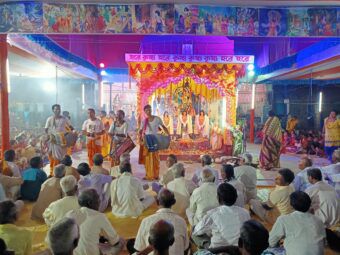 I used to go to this place in my childhood. Sometimes with guardians, sometimes with friends. And my fascination was the khichdi that was served on the last evening. To partake of this prasad was, and is, a great joy for everybody, not for me alone. It was a craze, so to speak. Hundreds of people sit together in rows and eat this delicious offering. I don’t know why, but for some reason, I never found home-made khichdi as appealing as that prasad which is served in kirtan pandals. Khichdi at kirtans has a different taste to it, no matter where it is served. I still have that zeal. If I get the time, I go to kirtan pandals and partake in this community celebration. The entire village partakes of this. It’s a grand feast. Everyone donates the necessary ingredients, like rice, daal, potato and other things.

But, even so joyful is the serving. The khichdi is served in large aluminum containers called nouka (literally, boat) with big ladles. Anybody can join hands. I have been fortunate enough to serve, as well as savour the khichdi 😋.

In all, kirtan is a grand village fest. Not only it reignites the devotion in people’s hearts, but also brings people together.

If you get the opportunity, do experience a kirtan sometime. I’m sure you’ll be ecstatic.

Image Credit: photos taken by me.