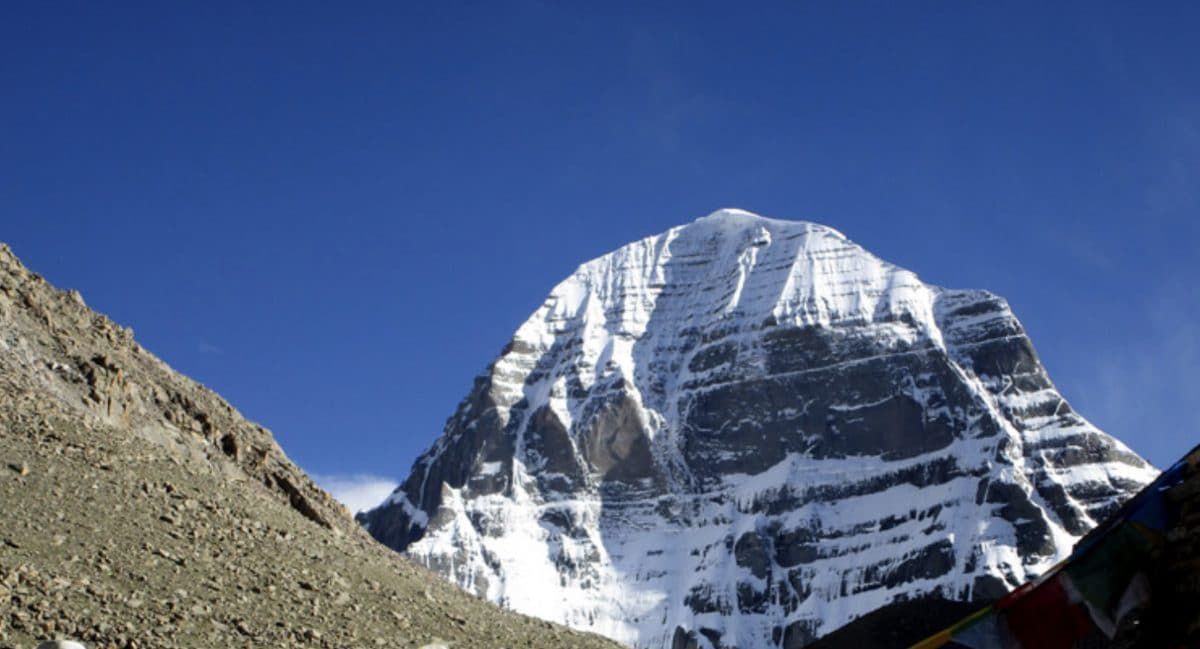 Part 3- In the Lap of Death

(You can read Part 2 of my pilgrimage here )

My dilemma continued. Yet some energy, as if blocking my thought process, kept carrying me forward. A few more steps…. A few more steps… Suddenly, out of nowhere a boy came up to me, and handed me a walking stick. I could hardly hold back my tears. We did not exchange any words, but I got my answer. There was no way back now. Only forward.

As the ascent started getting steeper, challenges toughened. It started snowing and sleeting. The air was thinning. Most people (including me) would take a few steps and then sit for a few seconds on the nearest rock. Again, a few more steps, and another rock. And so it went. Our group members were each given an oxygen bottle, but I never felt the need to use it. Oxygen was not my problem. My issue was my body’s overall condition: weak, nauseated, feverish and all bones felt as if broken from the cold I caught a few days prior.

The minute I would lift my head up to see how much further I had to go uphill, my body would feel even heavier and more nauseated. So, I decided to just put my head down and concentrate only on the “present” moment. Not the previous step, not the next step, only the present step mattered. I anchored myself to the energies of the place and slowly continued with my silent chant ‘Om Namah Shivaya’… One step at a time. I knew, eventually this would take me, where I had “coded” myself to be. It was already sealed within my system. I was determined. In one piece or many pieces, I would ‘end up there’. But for now, only this step mattered. Only this very moment. I left the rest to the Almighty.

Om Namah Shivaya, Om Namah Shivaya, Om Namah Shivaya… Each and every step, infused with this silent mantra, started feeling sacred. And so, with His Grace, a few hours later, I found myself at the highest point of the kora- the Dolma La pass @ 5,630m. Flanked by Tibetan prayer flags on both sides, I took out my agarbatti sticks. They would not lit up for a few seconds due to a lack of oxygen. But then, out of nowhere a gust of wind rushed forth and the smoke picked up. My presence got ‘sealed’😇. Shiva Shambo!

We were told not to stay at the highest point beyond ten minutes, since it might be lifelong injurious to our annamaya kosha (physical body). To be honest, my body felt so sick already, that I did not know, how more damaging it could have been. All along, I felt like walking on a razor’s edge, a very thin line between ‘this world’ and ‘that world’. Shiva’s destructive energies had been showing their grandeur and secretly enticing me all throughout.

Having bowed down to His Highness one last time, I started my very steep descent. Apparently, for people who take ponies on their second day, the latter can only go up, but not down, as the path downhill is extremely steep and rugged. Even for humans it was not an easy affair. I climbed quite a few other mountains in the past, this was probably one of the steepest descends I had ever done.

The surroundings going down were stunning though. One could see a magnificent rocky valley covered in snow with Gauri Kunda at the bottom. I witnessed, one Nepali woman sending her husband to the Kund to fetch her some of its holy water. I felt very sorry for the guy 🙃, who had to go all the way down to the bottom of this valley just to come back up again in this high altitude!

My descent lasted for a couple of hours or so. On the way down, I met a few followers of Bon tradition, for whom my descent was their ascent, as they did the whole kora anticlockwise. They belonged to the Tibetan Shamanist religion, who believe that this Mountain, which they call ‘Tise’, is the seat of sky Goddess Sipaimen.

At the base of the other side of the Dolma La pass there was a tent where hot water, tea, biscuits and noodles were served. But I could not even think of any of these. Still very much nauseated, I continued to walk. I had another long distance to cover over a flat land to reach my Day’s 2 camp at Zhuthulpuk (@4,800m), beyond which Mount Kailash is no longer visible.

This last stretch seemed to last forever! His Highness presented one last challenge. A very strong wind picked up, and it was walking against the wind all the way!  I even managed to get my face burnt. My body literally seemed like collapsing any minute. To be honest, I felt no less than Naropa, getting Tilopa’s ‘darshan’🙁🙂 under his tutelage.

Yay!!! Finally, I spotted some structure in the distance. But it took me only a few minutes to realize that it was just another resting place for people to recharge their ‘batteries’ with water, tea, biscuits and noodles🙁 . Apart from two local boys ‘running the show’, the place was empty. This was the very first time I actually sat down for more than a few seconds to give my body a little rest as my legs were getting increasingly wobbly. I felt, I was literally ‘losing’ it at times. Once I sat down, 10 minutes passed… 20 minutes passed… 30 minutes passed. I just could not move. I simply could not stand up. What to do? I had another hour or two to go. And, given the weather, it could start getting dark any minute.

Come on Lina, you can do this. Almost there. Internal dialogue had commenced again, yet my feet remained locked. Not moving. But then… I felt as if someone literally picked me up and started carrying me. And so, with a last glimpse of dusk, I found myself at Zhuthulpuk Monastery. Not a morsel of food, not a sip of water the whole day, burning with fever, I just crashed on whatever bed I found available in the common room for pilgrims. I put a damp towel on my forehead to break the fever and my body zoned out. Yet, I remained aware the whole night.

Stay tuned, what happened next…

God Existing
That One Person