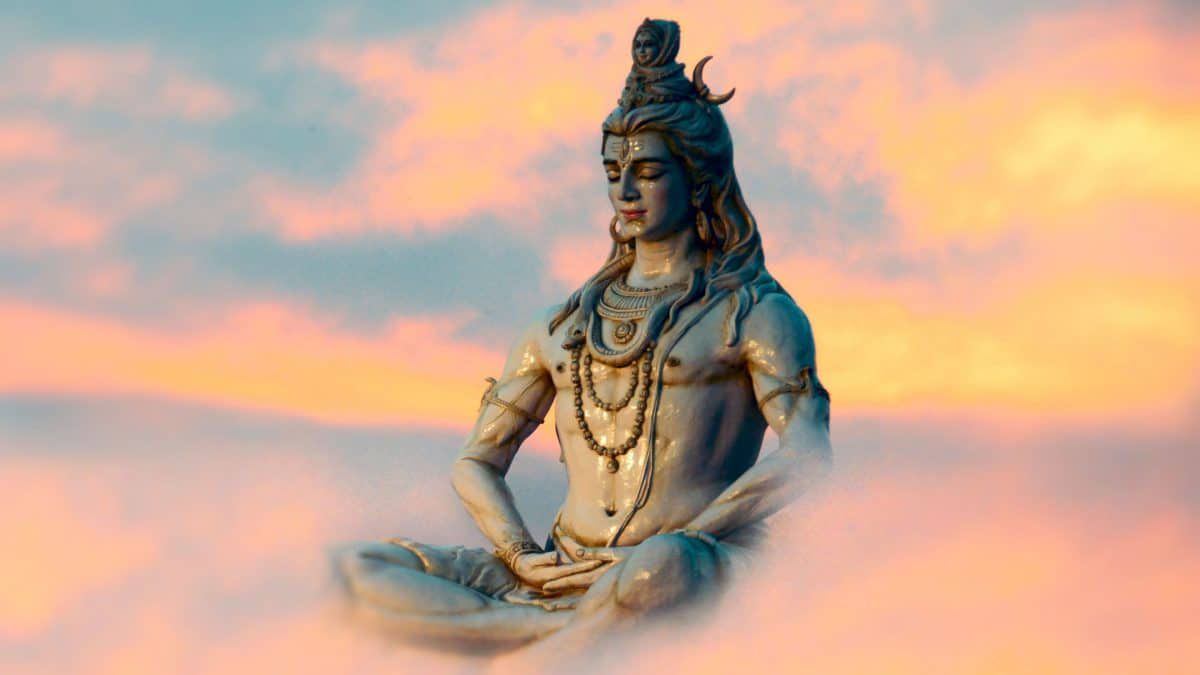 Jai Shri Hari, Pariwar. The following is an old text  by Sister Nivedita on Lord Shiva,  Hope you like it. Happy Shivratri.

In wild and lonely places, at any time, one may chance on the Great God, for such are His most favored haunts. Once seen, there is no mistaking Him. Yet He has no look of being rich or powerful. His skin is covered with white wood-ashes. His clothing is but the religious wanderer’s yellow cloth. The coils of matted hair are piled high on the top of His head. In one hand He carries the begging-bowl, and in the other His tall staff, crowned with the trident. And sometimes He goes from door to door at midday, asking alms.

High amongst the Himalayas tower the great snow-mountains, and here, on the still, cold heights, is Siva throned. Silent—nay, rapt in silence—does He sit there, absorbed and lost in one eternal meditation. When the new moon shines over the mountain-tops, standing above the brow of the Great God, it appears to worshipping souls as if the light shone through, instead of all about Him. For He is full of radiance, and can cast no shadow.

Wrapped thus into hushed intensity lies Kailash, above Lake Manasorovara, the mountain home of Mahadeva, and there, with mind hidden deep under fold upon fold of thought, rests He. With each breath of His, outward and in, worlds, it is said, are created and destroyed. Yet He, the Great God, has nothing of His own; for in all these that He has created there is nothing—not kingship, nor fatherhood, nor wealth, nor power—that could for one moment tempt Him to claim it. One desire, and one alone, has He, to destroy the ignorance of souls, and let light come. Once, it is said, His meditation grew so deep, that when He awoke He was standing alone, poised on the heart’s centre of all things, and the Universe had vanished. Then, knowing that all darkness was dispelled, that nowhere more, in all the worlds, was there blindness or sin, He danced forward with uplifted hands, into the nothingness of that uttermost withdrawnness, singing, in His joy, “Bom! Bom!” And this dance of the Great God is the Indian Dance of Death, and for its sake is He worshipped with the words “Bom! Bom! Hara! Hara!”

It is, however, by the face of the Great God that we may know Him once for all, beyond the possibility of doubt. One look is enough, out of that radiance of knowledge, one glance from the pity and tenderness in His benign eyes, and never more are we able to forget that this whom we saw was Siva Himself. It is impossible to think of the Great God as being angry. He “whose form is like unto a silver mountain” sees only two things, insight and want of insight, amongst men. Whatever be our sin and error, He longs only to reveal to us its cause, that we may not be left to wander in the dark. His is the infinite compassion, without one shadow or stain upon it.

In matters of the world, He is but simple, asking almost nothing in worship, and strangely easy to mislead. His offerings are only bel-leaves and water, and far less than a handful of rice. And He will accept these in any form. The tears of the sorrowful, for instance, have often seemed to Him like the pure water of His offering. Once He was guarding a royal camp at night, when the enemy fell upon Him, and tried to kill Him. But these wicked men were armed with sticks of bel-wood, and as they beat Him again and again with these, He, smiling and taking the blows for worship, put out His hand, and blessed them on their heads!

He keeps for Himself only those who would otherwise wander unclaimed and masterless. He has but one servant, the devoted Nandi. He rides, not on horse or elephant, but on a shabby old bull. Because the serpents were rejected by all others, did He allow them to twine about His neck. And amongst human beings, all the crooked and hunch-backed, and lame and squint-eyed, He regards as His very own. For loneliness and deformity and poverty are passwords sufficient to the heart of the Great God, and He, who asks nothing from any one, Who bestows all, and takes nothing in return, He, the Lord of all, Who refuses none that come to Him sincerely, He will give His very Self, with all its sweetness and illumination, merely on the plea of our longing or our need!

Yet is this not the only form in which Siva may come to the soul of man. Sometimes the thing that stands between us and knowledge is unspeakably dear. Yet is the Great God ever the Destroyer of Ignorance, and for this, when our hour comes, He will arise, as it were, sword in hand, and slay before our eyes our best beloved. In the middle of His brow shines forth the great Third Eye of spiritual vision, with which He pierces to the heart of all hypocrisy and shams. And with the light that flashes from this eye, He can burn to ashes at a glance that which is untrue. For foolish as He may be in matters of the world, in spiritual things He can never be deceived. In this aspect, therefore, He is known as Rudra the Terrible, and to Him day after day men pray, saying, “O Thou the Sweetest of the Sweet, the Most Terrible of the Terrible!”

So runs the tale. And yet in truth this thought of the Great God is but half of that conception which is known to the intuition of man as the divine. Two things there are which we see as God. One is knowledge, insight—Jnanum, as it is called in India—and this, carried to its utmost height, is Siva or Mahadeva. But some see God rather in power, energy, beauty, the universe about us. Indeed, without both of these, either becomes unthinkable. Hence Siva has ever a consort in Maha Sakti, the Primal Force. Amongst the pictures made, and the tales told, of Her, are those of Sati, and Uma, and the Great Death. She is Gouri, the Golden One, the fair, the light of the sunrise shining on the mountain snows. And she dwells ever in Kailash, as the wife and devoted worshipper of that Mahadeva, or Spiritual Insight, who goes amongst men by the name of Siva, the Great God.

P.S. :The above  text is out of print.  If you want to read more about Sister Nivedita and her compilation. You can find books on internet archive.

Best Thing to Do
CURD RICE