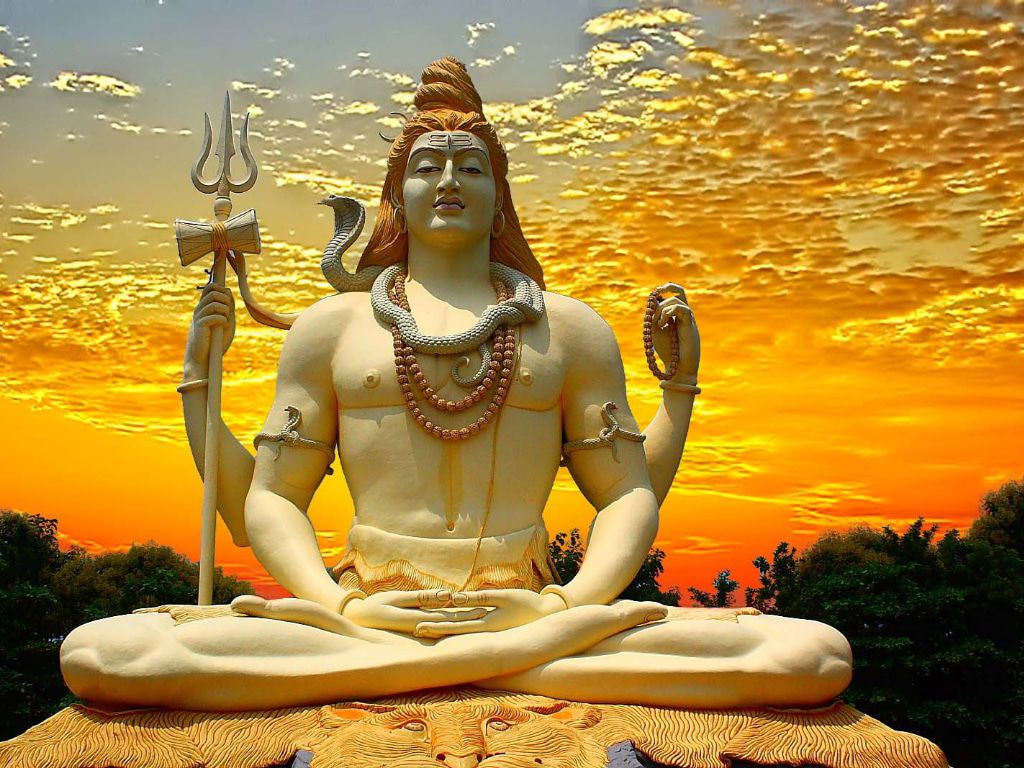 Finally the day of Mahashivratri had come. In morning, I first prayed to Ma to help me. I danced a little. “Today, I will worship him with a happy face.” I had already decided that I would speak, drink and eat as less as I can. I don’t know from where did I get this thought but I was telling myself that I would worship him as Ma did in form of Parvati. “Parvat ke saman drid sankalp, parvat ke saman sthirta” – “firm resolve as a mountain, stability of mountain”. After taking bath, I prepared for morning abhishek as I recited rudra suktam. As I did abhishek, I recited Shiv Sahsranama in a medium volume. It took more than half an hour, I mean after abhishek was over, I completed SS chanting. I tried to be as aware, alert and silent as I could. I thought of making a parthiv shivling. It is made basically using sand with some other materials and it is said to be very auspicious form of his worship. I searched you-tube but the only thing I got know was I have to mix milk, malai (cream), jaggery (gud), etc. Ther was no proper video on how to make a parthiv shivling. But I made up my mind that at least I should try once. So, I decided to try in afternoon. After a lot of thinking and hesitation I sent a Happy Mahashivratri mail to Supriya Didi. Her reply and all the best for night gave me extra hope and enthusiasm. I was waiting for 6.30 pm.

Around 9-10 am, a friend of mother visited us. She lives in Gujarat and was visiting us after a very long time. One of her daughter was of my sister’s age and other was about 3 yr old. They said she was naughty but was shying in front of unknown people. I was sitting on chair. She looked at me, I smiled, she looked away. This went on for some time. Then I covered my face with palms. She looked at me. I peeked through finger gaps and removed my palms. After some time of such play, she giggled. She would laugh like anything. I also began enjoying this play. After a long time, I was somewhat easy, enjoying. Ma was working through her, you will know later in this part. Although she could speak, we hardly talked. Our conversation was beyond words, we understood each other through signs and expressions. I played with her like a small child for about 2 hr. One play was we would hide behind chairs, she would irritate someone (for example by throwing something) and again hide herself and would then put finger on her mouth and tell me, “Shhh”. This happened many many times and suddenly I realized that Ma was telling me something through her – “Worship him silently, in subtle speech, don’t recite SS in physical speech.” I thanked her for giving me direction and such a nice time through that girl. Later when they were going, about 1-2 pm, my sister had plucked a rose flower. I took it and offered to her, she happily accepted.

Now, I first thought of getting my mind on proper track. I listened to Shiv Tandav stotram and some other using headphones. Then around 3 pm, I decided to attempt on making a parthiv shivling. I took some milk with cream, some gud dissolved in water in which I added sandalwood powder, some dried powder of cow dung. I filtered the dry sand of garden to make it fine. Before starting, I asked Ma to help me. “I have never made a parthiv Shivlinga, I don’t have any experience. But as Parvati, who have worshipped him. You know how to make a parthiv Shivlinga. Please help me.” At some points, I felt as if I would not be able to make it, I felt like crying, I asked her and she suggested. After about 1 – 1.5 hr this came out :

I didn’t make it, Ma made it through me. Due to combination of different substances, it had a great divine fragrance. Even my right hand became fragrant and it remained till late in night.

I gathered his favourite white aakda (or aak) flowers which are easily available where I live. Around 4.45 – 5.00 , mother prepared some snacks suitable for fast. I had not eaten anything much whole day and had already told her that I would not eat anything after 5, at most 5.15pm. She wanted to feed me more but I ate in limit and went to meditate. I kept meditation short and to their surprise, returned at 6 pm. I took a bath with cold water. Surprisingly, I applied face wash (which I only use when my mother forces me too much, no skin care). I took a sankalpa of not eating and drinking anything till I had completed 4 prahar Puja.

Then around 6.30, I started preparing for 1st prahar abhishek. I played the complete Sri Rudra Purush Suktam chant which lasted for 50 min. I first allowed them to do puja. Then I sat alone and recited SS which took more than one hour. Around 40-50 mosquitoes sat on my hands at one time. I didn’t move, I thanked them for removing some of impure blood. Sometimes, they would come near eyes or nose. Since I was sitting out for about more than 1.5 hr, my sister started crying (ma and sister are afraid of this devotion). In 2nd prahar (near 9.50), I was instructed to take less time. As I did abhishek, I began weeping, how will I worship him properly (no one saw me). Mosquito bites were not a problem. I began feeling that I would fail even today. I had thought about dancing for him but how? I told Shiva, if you want me to dance for you, arrange for it. I went inside early with heavy heart, without completing SS, still chanting it mentally, sitting on a chair. I asked my mother to go in study room, she said that’s ok but you don’t have to stay out. I closed the door, lights closed, I began reciting Ss mentally. Tears flowed with each name. Shivlinga was visible in mind’s eye. I don’t know what happened by the end of SS, I stopped weeping and started feeling better. The form that i tried to meditate on is almost same as the feature image. Then after SS, I decided to dance. Throat was drying out, but I thought if not today, then when? I danced on Parvati Vallabh ashtakam. Then afterwards I did some pranayam. Near 12, performed the 3rd prahar Puja. My father was already asleep (1 player out, 2 players remaining!). After 3rd prahar Puja, sister went to sleep. Mother started feeling drowsy and went to sleep. I told him, it’s high time, now please come.

After finishing 3rd recitation of SS, when I came, I found everyone sleeping. I took the opportunity to use phone. I took it in study room, closed the doors and plugged in earphones. First I thought to watch the recording of live abhishek on os.me. But then I thought, I do this all year not today. I closed it. I listened to this beautiful song once. It felt amazing, I was alone in my world. I began feeling blissful without any reason. Then I played it again and danced in that dark room. Only little external light was there coming from side of curtains. I was dancing as if I was drunk ! (Maybe he gave me bhang secretly!) It was bliss all around, I was immersed in Shiva’s love. There was no tiredness, no hunger, no thirst, no past, no future, no worries, nothing. “Kash ye raat kabhi khatam hi na ho.” I can’t explain how blissful I was feeling, without any reason. Writing about that moment fills me with bliss.

That moment too passed and my strange hangover slowly went. At about 3 am I did 4th prahar puja, followed by SS, still everyone sleeping. I don’t exactly remember when I was mentally worshipping him. I offered him khir, “you eat”, I said “no, you eat, my happiness is in worshipping you.”-“But, you and I are one”- “I don’t know anything, respect a bhakt’s sentiment.” I took bath in morning and worshipped him as I do daily. After that I finally broke my fast. At 7 am, I slept for 1 hr, after staying awake for about 27-28 hr( first time ever). Then I later drove to college for classes. By night I was exhausted and finally slept.

On Saturday, I wrote my first post. Now I realize that it was venting out of emotions and aftereffect of staying awake so much. Then from 14 or 15 March, following my inner voice, I started a Kali mantra chant, goal was 20,000 rounds.

The next post will be the last post in this series and will discuss what happened during that Kali mantra chant and in Chaitra Navratri. Try guessing what may have happened.

The Air.
The Good about the Bad